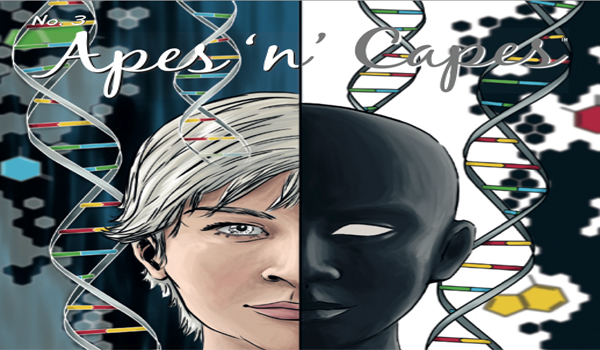 Yes, this is exactly what I was hoping for. Answers! Action! Apes!

I have to admit, when I wrote my review of the first two issues of Apes ‘n’ Capes, I had some doubts about the series. The writing, while strong, is subtle to a fault in the first two issues, and as I said, while I was intrigued, part of me was also still confused. Happily, the third issue manages to clear up a lot of things that weren’t so obvious in the earlier outings. The three two-page “Twists in the Tails” stories at the end of the issue are especially revealing, but I won’t speak too much about them here for fear of spoilers.

Picking up from the vent-hanger ending of the second issue, Issue 3 sees the Flame bringing all the characters together to try and make a move against the reign of the bears. Not everybody is so happy to be part of a rebellion (Pak George is made to take a few unscheduled naps when he proves uncooperative), but Dr. Waters and Primer each heed the Flame’s call in their own way.

As for Pak George, it doesn’t help that the Flame continues to be a dark hero. He kills a bear in the first few pages of this issue and has not qualms about it, as the bear had killed a monkey earlier. “A life for a life. Sometimes a necessary trade-off in our world,” he says in dry explanation to George. Like many vigilantes who came before him, the Flame is a firm believe in the ends justifying the means and is determined to protect his jungle at any cost. 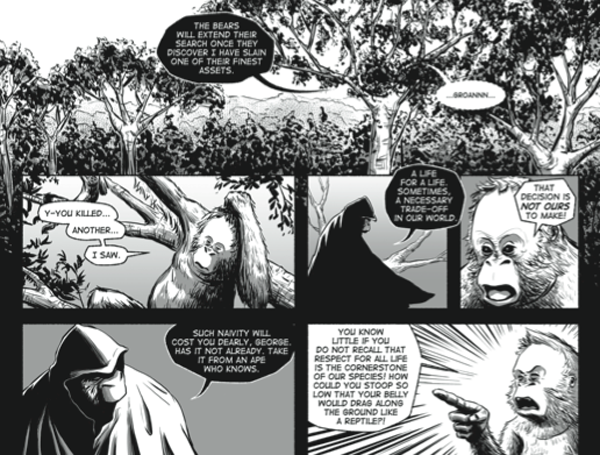 Another important reveal comes when Primer explains a bit about what it is to be a “sample”, finally giving us some hints at what is going on: not only is Tremayne (the company, not the ape) investigating primate origins, but these genetic tests and modifications that form Waters’ Chimera Programme hint that the bears have something much larger and much more diabolical in mind for the future.

Perhaps the most memorable aspect of Issue #3 is new character Wallace, a Scots-ape whose dense accent is nearly indecipherable in my American eyes, but fortunately I’m not the only one; George doesn’t quite catch everything Wallace says either. Still, the leaf-wearing macaque seems to be quite the wild-card and I look forward to seeing more of him in Issue #4 (which will hopefully include a decoder ring).

In addition to the writing picking up, the artwork has also improved significantly since the first issue. There is a lot more detail, especially in the backgrounds, and the Wallace splash page we included in the previous review is just one treat of many. I particularly liked the way the Flame and Waters’ escape from the bears is presented discreetly from Primer’s point of view after he’s told to keep his eyes shut (trust me, it works)

On the whole this issue managed to address many of my concerns about the first two issues. I have a feeling that Apes ‘n’ Capes will prove to be a series better read as a whole, with the sum much greater than the individual issues, and with that in mind, I think it will suffice to say that this ape is eagerly awaiting Issue 4!

Apes ‘n’ Capes Issue 3 has its debut today at the London MCM Expo, so be sure to stop by the Dead Universe tables to get your paws on a copy. You can find out more about Apes ‘n’ Capes on the official website here, as well as buy not only all three issues of the series, but also a plush ape in  a cape of your very own! You can also follow the apes on Twitter @Apesncapes.