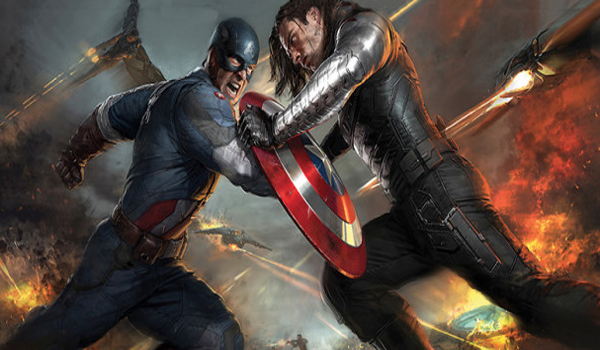 With the next installment in the Avengers’ juggernaut, Captain America: The Winter Soldier, due out in April, we decided to take a look back at the namesake comic that inspired it.

When the Red Skull is mysteriously shot dead under the orders of General Aleksander Lukin, S.H.I.E.L.D. is brought in to investigate. If it seems a bit early to be killing off Steve Rogers’ nemesis, have no fear: death is rarely the last chapter in a villain’s story. With Lukin lingering in the shadows as antagonist, Rogers seems to be in denial about the demise of his World War Two foe. With the Cosmic Cube still in play, the list of suspects is extensive, but when Jack Monroe AKA Nomad is next to be assassinated, the plot thickens for our starred-and-stripped hero. The Winter Soldier features Rogers’ former love, Agent Peggy Carter – though its likely her niece, Sharon, will taken on this role in the film due to the time jump. It’s she who reveals the heartbreaking news that the man responsible for this spate of deaths is none other than Steve’s former best friend Bucky Barnes, long thought dead. How will such news effect our proud and noble hero? After all, this is Bucky: they joined the army together to defend the world from evil. Now one of them is working for the bad guys, how will either when they inevitably come face-to-face?

Written by Ed Brubaker and brought to life by Steve Epting, Captain America: The Winter Solider deals with possibly Cap’s most punishing enemy to date. If Bucky is the Winter Solider can he push past those emotions and save the world? Can he even reason with him and stop this madness? Or will it come down to either he or Bucky must die? Cap’n understandably finds its difficult to contain his anger at the fact Bucky has turned into something they both vowed to defeat.

During a pretty standard operation defeating the hopeless A.I.M. agents, Cap is finally brought face to face with the mysterious Winter Solider. Taken back by his appearance Steve questions him on whether he is in fact Bucky. His response: “Who the hell is Bucky?” Back at the Helicarrier, it appears this mission is having more of a toll on Steve than he can handle, as the evidence builds up that Bucky has turned, he loses a grip on reality for a few seconds and lets his inner berserker loose. Later, during a raid trying to reach General Lukin, Cap disobeys a direct order and goes straight for the target’s throat. Assaulting a Russian diplomat in the presence of the Vice President and chief of the UN spells out bad news.

A mysterious package arrives the next day at Steve Rogers apartment, showing how Bucky was found in the ice and became the result of a experiment to turn him into the perfect spy someone who could slip into America’s heartland unnoticed. Although Bucky’s vitals showed he was alive, all memories and personality that made him unique have since been flash frozen and locked away, making of him a empty vessel for the KGB to create a puppet out of.

With Cap quickly becoming a loose cannon, it’s up his old friend The Falcon to bring him back under control and begin their journey together to try and overcome the Winter Soldier. Of course, there will inevitably be changes in transforming it to the big screen, but we can most likely expect to see the events of Bucky’s transformation shown in flashback, mirroring, as they do, Rogers’ own protracted arrival in the present day.

Making The Winter Soldier the second installment in Cap’s franchise is a smart move: as well as providing room for new character, i.e The Falcon (a key ally in the MCU), it allows the producers to show different sides to Captain America. One of the greatest superheroes known to man, a super-soldier, a patriot, Steve Rogers is still human, fallible. Another cameo appearance comes from the henchmen Crossbones, being played in the film by Frank Grillo, an erstwhile ally to the Red Skull. With the Winter Solider taking out Red Skull, it leaves Crossbones with two enemies to face off against. Does he avenge the death of the Red Skull or simply continue in the pursuit of killing Captain America? There is, of course, always the third option…

Overall, Captain America: The Winter Soldier is a well-written and dramatic comic that provides plenty of talking points. We just hope they can coordinate all the pieces and do justice to Brubaker’s script.