3. The Doom That Came To Gotham 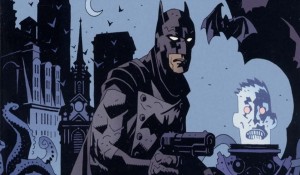 Bruce Wayne and his three young wards- Dick, Jason, and Tim- have returned to Victorian Gotham from an expedition in the Arctic, where they discovered some deeply disturbing and many-tentacled dark things. Unfortunately, this causes a creeping terror to reveal itself in Gotham. This silly premise could be easily messed up; after all, Batman’s main appeal as a detective is his rationality, and that shouldn’t sit well with the mind-melting Lovecraftian brand of horror. However, as this is written by Mike Mignola, and beautifully illustrated in near-chiascuro, B.P.R.D style, you can put your worries aside, and enjoy a fascinating mix of Batman’s pulp roots with the antiquated, cosmic horror of Lovecraft. 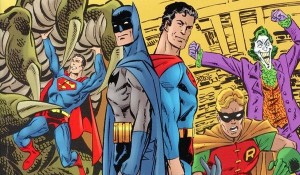 AKA: Days of Our (Super) Lives

John Bryne takes writing and illustrating duties here with a story following the World’s Finest- and their offspring- from 1939 to 2919. After meeting at the Metropolis World’s Fair, Batman and Superman work together, eventually raising families who take over their mantles. Bryne knows the characters back to front, and portraying them as super best friends is a welcome change of pace for a reader of contemporary comics. By portraying the passage of time, Bryne is able to have a few affectionate pops at trends in comics: Mxyzptlk and Bat-Mite appear in the late 50s, spoofing the goofiness of that era, while the late 70s and 80s stories are notably darker than the rest of the comics. This is one of few Elseworlds which proved popular enough for a follow-up, getting not one but two sequel comics which covered different periods of time in the same timeline (and, in Generations III, an alternate timeline of the Elseworld itself!) The sequels are of varying quality, but the original is a cracking idea executed well- as would be expected from a master like Bryne. 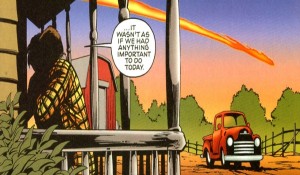 JLA: The Nail explores an alternate history of the DCU, where Ma and Pa Kent miss picking up Superman’s spaceship, and so Superman never becomes a public figure to unite the DCU. The Justice League still exists, but it’s fractious and uneasy. An anti-metahuman campaign based on xenophobia has swept President Luthor to power, and whoever’s behind it is trying to kill off the League. Through clever misdirection, it’ll be a while before you realise the true culprit, and when you do it’s a legitimate shock. By using the limited nature of the Elseworlds properties to avoid having to pull its punches, and by examining a small change could alter the history of the DCU as we know it, this shows the best of what an Elseworlds comic can achieve.

So there you have it: six excellent insights into DC’s best properties, from an alternative point of view. Some other comics which do this, but which were not published as Elseworlds, include All-Star Superman, Superman: Red Son, and Superman: Secret Identity, all of which are also worth seeking out. Do you have a favourite Elseworlds title in this list? Or did you think Leatherwing was actually worth reading? Let us know in the comments, or reach us on Twitter!