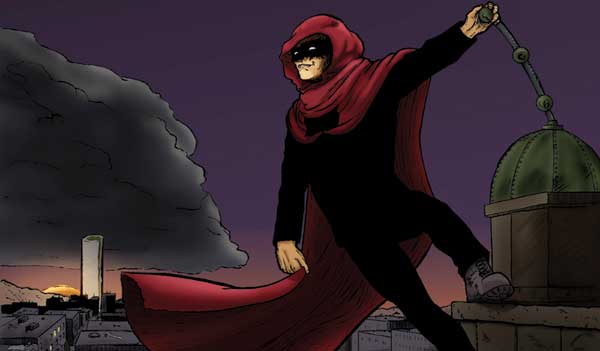 This week, we had a chance to chat with Philip Nolte, writer of the new comic The Crusader. We spoke to him about his inspirations, his Kickstarter campaign, and just why anyone would make a priest into a superhero!

Can you tell us a bit a more about The Crusader?

It’s a 24-page comic about a priest named Cameron who wants to be a superhero so much that he makes himself a hooded cloak out of old curtains and runs around the rooftops of Vine City at night looking for trouble.  He hasn’t been doing it very long.  A couple of months, maybe.

When he’s out one night, he rescues a girl from some thugs.  He panics when she starts asking him question after question and pulls his hood back to show her he’s just a normal guy and not an alien or a mutant.  Unfortunately, he also reveals his priest collar.  Like I said, he’s new at this.

She follows him home to St. Eustatius Parish.  From there, things get a little bit more complicated.

Michael [Bushman] and I have been working on this for a while, and I hope the first issue is a hit, because I can’t wait to see what people think of the second, or the third.  We’re both big fans of superhero comics, and comics in general, and this is our take on a street-level vigilante that incorporates all the things we like about comics and everything else we’re interested in.  It’s a big list.

Who (or what) are your greatest influences/inspirations?

It’s the worst kept secret in the world how big of a fan of Teenage Mutant Ninja Turtles I am.  I was four years old in 1989 when the cartoon premiered, so it really couldn’t be helped, and with how well-crafted the new comic and cartoon are, I doubt my love for that franchise will die anytime soon.  Michael Bay be damned.

I started reading comics with Asterix and Tintin, and read a lot of Narnia and Redwall and Chronicles of Prydain as a kid.  Watched a lot of Star Trek and Star Wars and Batman and X-Men.  I started collecting floppies with the first volume of Ultimate Spider-Man and it spiralled out of control from there.  Since then, I’ve only missed a handful of Wednesdays.

For The Crusader, there’s a lot of early TMNT in there, just without the ninjas or mutated rats.  A bummer, I know.  We also wanted to recapture that feeling that the early Marvel books have, but use modern storytelling to do it.  It takes a special kind of person to dress up and fight crime of their own volition and seeing them learn how to actually do it, and sometimes failing, is really exciting.  You know Iron Man’s gonna win because the movie is called Iron Man, so Tony Stark testing his equipment and being harassed by robots is, to me, the real fun of the movie.  To get to tell that kind of story, a vigilante’s beginnings, in a setting I feel is incredibly undermined, was too good of an idea to pass up.

What are some of your favourite comics/artists/writers?

I love Paul Grist‘s work.  All of it.  I’m a huge fan of Terry Moore and Jeff Smith and Mike Mignola.  All of them and more are thanked in The Crusader, actually.  I recently discovered James Stokoe and Paul Pope.  Both of them are amazing.

I enjoy the standards like Saga and The Walking Dead, but I also try to go back and read Watchmen and Rising Stars and Sandman and Savage Dragon and Aztek and Nextwave and…

There is really no end to what I will read if it’s put in front of me and can keep my attention.  Right now, I’m knee-deep in Chuck Dixon‘s Robin.  Awesome stuff.

Can you tell us about the process of working with Michael Bushman?

It’s simultaneously the most and least nerve-wracking experience I’ve had working in comics so far, and I owe him a great deal of gratitude for putting up with me.  I say most because I can give him three pages worth of script and get a one word answer back, and least because once those three pages are put down on paper, they’re gorgeous and I feel terrible for agonizing over whether or not he would “get” what I was trying to do.

Michael’s spent a long time honing his skills and studying and reading and learning how to do what he does, and I’ve learned to trust him completely with the book.  I’m pretty stubborn.  He’s one of my best friends, and I hope we get to keep doing what we’re doing for a long time.

What has been the most difficult part of the project so far? And how about the easiest? Most surprising?

The book can be kind of a hard sell.  “Why a priest?” is something I’ve heard a few times, because despite a few notable examples, there isn’t a great deal of religion in comics.  Let alone superhero comics.  The Crusader is a superhero comic where the protagonist is a priest, so there will be religion in the book, but it is not our intent to convert people or coerce them to believe anything they did not choose for themselves.  It is not a religious book.  The same way that Daredevil is not a law book and Spider-Man is a not a photography book.

Easiest, I would have to say, is generating ideas.  Future ideas, to be specific.  There are so many “if we get to it” ideas written down half-legibly on the backs of receipts or in fragmentary text files on my computer.  Staying true to the characters and how human beings behave and interact and not just forcing them into the roles we want them to be is significantly more difficult.  I’m learning patience the hardest way possible, and it’s through writing this book and learning to let the characters tell their own story.

What made you choose to hold a Kickstarter campaign?

We’re doing a comic book about a priest who wants to be a superhero.  Our very first comic.  This is our only shot at making a first book ever.  If we succeed, we want it to be on our terms, with people who are behind the idea and behind us.  It’s hard, but if we pull through, it will all be worth it and hopefully invigorate us to get the next book out there even quicker.

What’s next for you?

I’ve been working with the folks over at Fifth Dimension Comics from their first story, The Magician, and there’s a really great community building with some projects I’m really excited about.  I get to write about bird people who live in floating cities.  Who wouldn’t want to do that?

If we’re a hit, Michael and I will be hard at work on The Crusader #2, plus he’s got a few projects of his own I hope people get to see soon.  If you like Mark Trail, you’ll love Mark Trail on steroids.

Besides that, I’ve got a few other ideas I’d love to do, but there aren’t any solid plans.  My buddy has a book we’re developing that I hope becomes the next Inkspot Comics title, and I know we need to get back to The Assembly at some point.  We released the first issue on DriveThruComics last year, but there’s a lot more story to tell before I’m willing to let that book go.

Find out more about The Crusader and pre-order a copy now on the Kickstarter page!  You can find Nolte regularly updating Inkspot’s Facebook and his own Twitter, @PANolte, so stay tuned for his next big project!