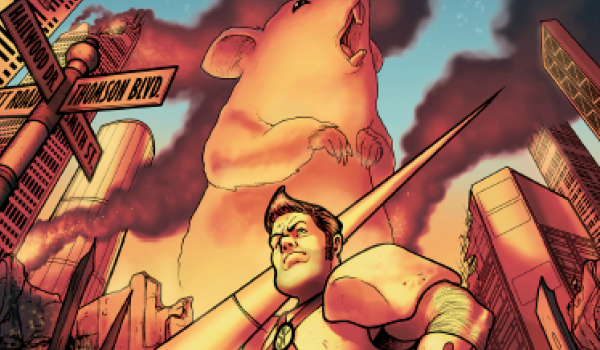 If you’re looking to make a break into the comic industry, there are worse ways to go about it than assembling an indie anthology. Collaborating with other upcoming writers and artists, blending together different narratives and styles – you’re bound to hit gold somewhere, right? What sets Biodegradable, Issues 1-3, apart from the rest of the crowd is its commitment to telling tight, distinct sci-fi tales.

Each issue follows the same format: roughly half a dozen stories, mostly penned by the deeply talented David Hailwood. Though just beginning his break into the industry, Hailwood clearly has a real appreciation for the sci-fi genre. Each of his stories are neat and tidy, almost all self-contained, following a single (or few well-woven) concepts to its natural conclusion, with the occasional twist thrown in for good measure.

From the eye-catching first cover – a lance-wielding knights standing amidst city ruins beneath a giant rampaging rodent – to the one-page final story of Issue 3 – a cynical, World War One-inspired tale – Biodegradable 100% seems to have a remarkably clear sense of its own identity. Featuring titles like “Electro Cute Stolen Zemuline” and recurring character The One-Eyed Wench, the series is pure and brilliant pulp. 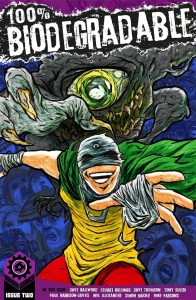 The quality of artwork varies, but it crucially always matches the story being told. The drawings for “A Better Place”, provided by Stuart Giddings, are crisp black-and-white and a perfect fit for story’s classic neo-noir stylings. Meanwhile, recurring feature “Medium Flake” – about a well-intentioned ice cream seller who tries to provide his customers with aides against supernatural mischief – lends itself to the more brightly-colored, rough-and-ready cartooning of Paul Harrison-Davies.

As with most anthologies, 100% Biodegradable isn’t 100% successful, but the hits far outweigh the misses. There’s “Spare Parts” – art by Tony Sulieri – narrated by a disreputable Thénardier-like figure and which documents the commercialization of a human corpse, from science labs to eminent soirees. Then again, the tonal shifts “Expendable Eddie” – about an educational clone – may be more to your liking.

Whether you prefer for sentient alien photocopiers or office-work metaphors, 100% Biodegradable will have something for you. Hailwood is a great economical storyteller and the artwork is consistently impressive. The standout story, however, comes in Issue 3: the images conjured up by Denis Vermesse “Life & Death” bring to mind Neil Gaiman‘s Sandman. The series is close to becoming a more-than reliable brand, and with, perhaps, a few more risks, it could be magnificent.

You can find all three issues of 100% Biodegradable on their Comicsy or DriveThruComics pages!