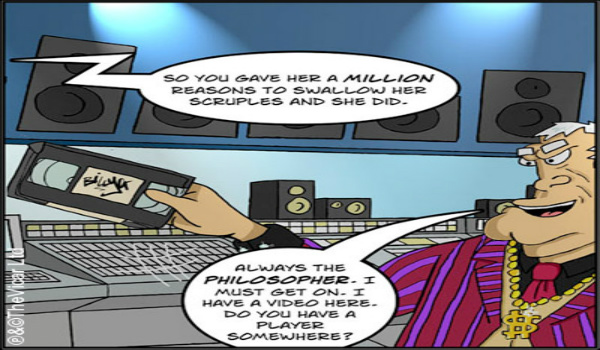 Comic adaptations of novels can often produce mixed results. For every The Hobbit we have a Twilight: The Graphic Novel. Thankfully, The Mysterious Case of Billy’s G-String falls into the first category.

By being based on a less well-known novel, writer David Singleton, adapting Punk Sanderson’s novel, is able to explore the story and characters in his own creative style without having to worry about angering fans or differing from other interpretations. So here we have some of the most off-beat and crazy characters imaginable,

Punk Sanderson is a seemingly never sober musician (in the Punk genre, funnily enough) who is obsesses with a band that, for legal reasons, has to be referred to as ‘Tits N Arse’. In addition to the correct name of the band not being given, panels in the comic inform us that characters who were supposed to be men were changed to women because otherwise there would not be enough women in the story. Thank you for making us aware of that, Singleton.

Punk is the assistant of the Vicar, a music producer who is mostly drawn with his face appearing off-panel. Our two heroes find themselves drawn into a mystery involving famous singers, an airline called Sleazy Jet, and cafes called Coffeesucks.

The Mysterious Case of Billy’s G-String is a graphic novel, in every sense of the latter word. With a length of 120 pages, you certainly get your money’s worth, and hell, it’s even broken down into chapters, an extraordinarily rare occurrence for comic books. This is not something that was intended to be read in one sitting, as if often the case with comics today, but something that would have a more lasting appeal.

Although it was probably not the fault of the creators, the censored swearing comes as a disappointment, especially when compared to the frequent sex references on display. Because of this the whole ‘adult cartoon’ feel has more trouble getting into full swing, but the cartoonish artwork lets you know right away what you are in for. The real world this ain’t. Or as they put it “if you’re expecting romance, you’re reading the wrong book”. Romance may not be in abundance here, but laughs certainly are.