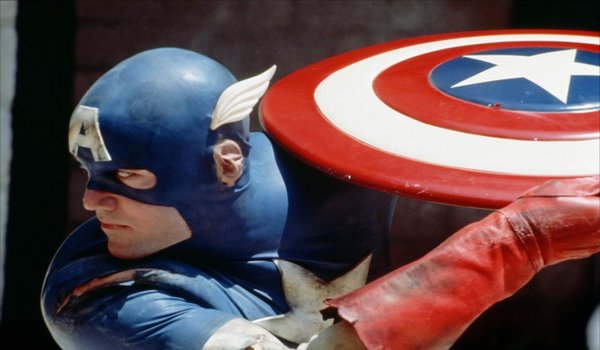 Believe it or not, Captain America: The First Avenger was not the Star-Spangled Man’s first cinematic outing. There was the 1944 Republic Pictures serial, the 1979 TV film starring Reb Brown, and the subject of this Second Look, the 1990 film Captain America. Made on a shoestring budget, released at the last moment direct-to-video, Captain America is a film that feels at heart very dull. The story is a potted version of Captain America’s fictional history, the characters are mostly one-dimensional, the action scenes are unimaginative thanks to the limitations of the budget, and the whole picture feels very… meh.

The first twenty minutes is jam-packed full of narrative. In 1936, an Italian child prodigy is used by Nazis to create a super soldier, but the woman in charge of the operation, Dr. Maria Vaselli, objects to the use of the boy and flees to America. The poor kid is experimented on anyway and becomes the Red Skull. Dr. Vaselli decides to right her wrongs by launching a similar super soldier project for the American military, but with a volunteer this time around. Enter Steve Rogers (Matt Salinger), a solider who suffers from polio. Steve bids farewell to his girlfriend Bernice (Kim Gillingham) and travels to a top-secret laboratory that apparently can’t afford proper lighting.

Dr. Vaselli straps Steve to a chair and, through mysterious use of some Frankenstein-esque explosions, Steve is transformed into Captain America. The military officials present congratulate Vaselli, only for one to suddenly reveal he is a Nazi spy, shouts “Heil Hitler!”, and guns her down. A little while after Dr. Vaselli’s death, Captain America is sent off alone to prevent the Red Skull (Scott Paulin) from firing a rocket at the White House. The Red Skull’s facial makeup is pretty funny – it looks like an oven-baked Freddy Krueger mask. The Red Skull kicks Captain America’s ass and ties him to the rocket, launching him off to bomb the White House.

In Washington DC, a boy named Tom Kimball witnesses the rocket’s approach and takes photos of Captain America, inspiring the our hero to forcibly kick the rocket, changing its directory and causing it to crash-land in Alaska where he spends the next fifty years in popsicle mode..

The film jumps to 1993, where Kimball is now the US President and is going to attend a vital conference in Italy to address the environmental crisis. The Red Skull – who’s had some dodgy plastic surgery – plots to kidnap Kimball and then destroy half the world using a bomb. There is some more rubbish about Red Skull being part of an evil secret order that has caused most world disasters and crimes like the assassinations of ‘60s political figures. Anyway, Captain America is found, de-ices himself and spends the rest of the movie running around looking clueless. He vows to save Kimball when he is kidnapped by Red Skull, and teams up with Bernice’s daughter Sharon (played by the same actress) to save him.

Writing out that brief recap felt incredibly exhausting. It’s not even quite laughably bad enough to be enjoyable. Ned Beatty shows up as Kimball’s journalist friend to aid Captain America, but Steve steals his car and then he is killed off soon thereafter. The film does have a lot going on story-wise but yet it feels like nothing is happening. I don’t know if the budget, the script, or both were responsible, but Captain America’s characterization is beyond awful. Matt Salinger has the acting capacity of dried wood and makes Captain America look like the most useless superhero ever.

Salinger’s Captain has one fight with Red Skull in which he is beaten up in seconds and tied to a rocket. He has to run away from a hit-woman on a scooter by leaping into Beatty’s pickup truck, which he then steals. Yeah, he thinks Beatty is a Nazi double agent since he’s driving a German-made car with Japanese technology in it, but come on. He’s Captain America! He then pulls the same trick on Sharon, and later hijacks a boy’s bike by bribing him. And the last fight against Red Skull’s minions is utterly embarrassing, with Kimball leading the charge with Captain America bringing up the rear. There is meant to be something cool to be found in the US President teaming up with Cap, but it comes off as silly.

The Red Skull is the most entertaining thing about the film. There is a subplot where Steve and Sharon come across an audio recording of Nazis murdering Red Skull’s family after he was abducted as a child, and Steve plays it for him at the end of the film. Red Skull is visibly horrified and then tells Steve that they are both tragic figures. Red Skull also has a daughter among his army of fashion model minions, Valentina, who is based on the comics character Sin. She doesn’t really have much of a personality, but clearly wishes for her father to be happy, which I guess stands as some sort of character motivation, at least.

The ending of the film really bothers me, particularly the actions of Captain America. After playing the audio recording to Red Skull, the Nazi decides to activate his bomb to end his misery, only for Cap to toss his shield, knocking Red Skull off a cliff to his death. Valentina pulls out a gun to shoot the Captain, only for his shield to fly back around, because apparently it is part boomerang, and lop off her head. Cue a sub-Bondian quip from our supposed hero and look directly at the camera with a smirk as if to say, “Yeah, I’m awesome.” The film then ends pretty abruptly, with a comic image of Captain America in the background and a fake plea asking the audience to support the fictional United States Environmental Protection Act 1990 (which was actually a British mandate, but, at this later juncture, really who cares?).

In conclusion, ’90s Captain America is a mishandled disappointment, with no real redeeming features, and absolutely nothing to write home about. If you wish to watch good Captain America films, there are at least three others to choose from.

Would you watch this movie? If you have, can anyone tell me quite why it felt so rubbish, even compared to other superhero movies at the time? Or do you have a different opinion of it altogether? Sound off in the comments or send us your thoughts on Twitter!