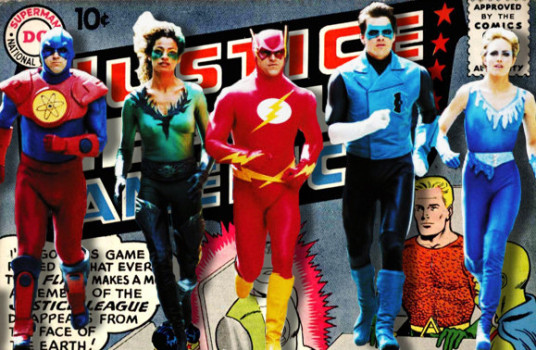 You know something? Despite my utter dislike of DC and their characters, in recent months I have mellowed towards a few of them. Superheroes like Green Lantern, The Flash, Green Arrow, Martian Manhunter, and Sandman (The Vertigo version) have wormed their way into my shrivelled up heart and found a place amongst the pantheon of actually GOOD superheroes that Marvel has presented up with since 1961. Don’t get me wrong, I still hate Batman and Superman and… pretty much the rest of all the DC superheroes, but these few I feel deserve a second chance. Furthermore, I feel that maybe I should be more open to the idea of DC making good movies and television shows. I’ve been watching a lot of Arrow lately and am looking forward to seeing what they’re going to do with the new Flash show, so maybe it’s time to explore some of DC’s past shows. Ooooh! What’s this? A Justice League pilot episode from 1997? Might as give it a watch. How bad could it be? ‘Scuse me just a sec while I go check it out.

AHHHHHHH! BURN IT! KILL IT! MELT IT WITH ACID! DISMEMBER IT WITH RUSTY SPORKS! AAAHHHH! AAAHHHHH! WHHHHHYYYYYY????

Okay. I’m back. I’m better. I’ve calmed down. The good news is, I have reaffirmed my all consuming hatred for DC. The bad news is THIS PILOT SUCKS THE SCROTUM OF SATAN!!! So how does it begin? In the form of a mockumentary. You heard me. The pilot is interspersed with clips of the main characters being interviewed. Out of costume. With their full names being shown. Oh yeah. Just throw the whole secret identity business right out the window why don’t you? Who are the main characters you ask? Well we’ve got Barry Allen a.k.a. The Flash. Cool! Then we’ve got Guy Gardner a.k.a. Green Lantern! Wait… isn’t he the one everybody hates? And why does his costume look more blue than green? Then we’ve got Ray Palmer a.k.a. The Atom! Wow, that costume is awful! After him there’s B.B. Da Costa a.k.a. Fire! That’s it? Her name is just “Fire”? How unoriginal can you get? And finally we have Tori Olafsdotter a.k.a. Ice! Okay, first “Fire” now “Ice”? What is this, a Robert Frost poem (And the award for most pretentious joke goes to…)?

So we’ve got a cast of crap characters, a stupid framing device… what’s missing? A ridiculous story of course! So what big, bad, evil villain will the Justice League have to face? Lex Luthor? Vandal Savage? Deathstroke? Darkseid? Answer: none of the above. They have to contend with a terrorist calling himself “The Weather Man”, who is armed with a device that can control the weather. So not only is the bad guy named after a Nicolas Cage movie, but he’s using the same evil plan as Sean Connery in the 1998 Avengers movie? Rip off! Oh wait… this pilot was made in 1997. It’s still stupid though. And then there’s the fact that this is a TV pilot, yet it’s over an hour long. I know some pilots do this, but usually they manage the time they are given much better. Firefly‘s pilot was well over an hour but it took its time introducing the characters over the course of the episode as well as the world they inhabit. Justice League does not do this. Yeah, we are introduced to the characters but it feels kind of rushed. More to the point, we don’t get to SEE what the characters are like. We get TOLD what the characters are like. Either in dialogue or in those stupid interview scenes.

Speaking of the characters, let’s look them in more detail, shall we? Barry Allen in the interviews describes himself as an average guy who likes bowling and watching tv. Ummm, isn’t Barry Allen a forensic scientist? Here, he’s kind of a slacker douchebag. What the hell? Fire (Ugh) is an aspiring actress who is struggling with getting bad roles. In fact when we first see her, she’s dressed as a banana for a tv advert. It’s still a better costume than Atom’s though. Speaking of, he’s a science teacher who’s just a nice guy who can’t get the girl. Awwww. And Green Lantern? He’s a smooth talker who can’t seem to balance a personal life and a superhero life. What about Tori? Well, she’s a timid scientist who doesn’t like to make waves. Good for her.

You want to know why these characters seem weird? At the time of it’s release, a lot of critics called the pilot “Friends with superpowers”. As in Friends the sitcom. And that’s exactly what these characters feel like. Characters from a sitcom. Now, I get what the writers were trying to do here. They were trying to make the characters relatable and, in a way, normal. But here’s the thing. Superheroes are not normal. They can be relatable, but in many respects they have to be larger than life. Look at Peter Parker, for example. He’s not an average high school student. He’s a superhero that’s in high school. There’s a difference. The characters don’t have to be mild mannered reporters or billionaire playboys, but they shouldn’t be your average Joe Bloggs either.

The story begins with a tornado hitting the city of New Metro. As Tori, who is a meteorologist and not yet a superhero, studies it, the JLA work to save the people from it. Green Lantern saves the life of a young boy, Fire (Ugh) saves trapped construction workers, Flash runs around the tornado thereby creating a counter current and dispelling the tornado. And what did Atom do? He rescued a kitty cat that wouldn’t get to safety. Okay, I’m calling it. Atom sucks. Fire may have a stupid name but at least she saved three people. What did you do? Pull the tail of a cat so it would run to it’s owner. You suck Atom. You suuuuuuuuuck!

So after dispensing with the tornado, the gang part ways. Fire (Ugh) arrives late for an audition only to be hit on by David Krumholtz, who she rejects. In my mind, he took this rejection so hard he builds a robot girlfriend called Lenore. Just let me have this, okay? Meanwhile, Barry is kicked out of his apartment so he moves in with Atom and GL. And right here, the pilot shows us that the writers clearly had no idea what they were doing. Barry complains that he doesn’t have the same life skills as Atom and GL, both of whom are successful. As he puts it: “I’m fast… that’s it. And it usually comes off as a liability than an asset.”.

Okay, a few things. Firstly… YOU CAN MOVE FASTER THAN ANYONE ELSE ON THE PLANET! Yeah, that’s all you can do but so what? Become an athlete! Perform magic tricks on stage! Anything! You could make millions! Next, what do you mean, “liability”? Not once has your powers gotten in the way! You got rid of a tornado single handed! The only drawback is you have to eat a lot because of your super fast metabolism. That’s not a liability, that’s just an inconvenience. A minor one at that! And lastly, YOU’RE A BLOODY SUPERHERO! MORE THAN THAT, YOU’RE PART OF A FAMOUS SUPERHERO TEAM! It’s safe to say that at least part of your life is together! Get a grip!

Meanwhile, Tori uncovers a hidden device in her lab that gives her freezing powers. This brings her to the attention of the JLA who take her to their secret HQ to meet their leader… Martian Manhunter? Alright! As I said earlier, Martian Manhunter is one of the few DC characters I can tolerate. Maybe he can help sort out this mess of a pilot. Or at least he would do if he wasn’t played by David Ogden Stiers. Now, let me start off by saying that Stiers is a good actor. And the costume and makeup effects do make him look a lot like the MM from the comics. But this doesn’t change the fact that David is, how can I put this delicately… stout. And by stout I mean rotund. And by rotund I mean he’s got a massive gut. Seriously, he looks like Piccolo from Dragonball Evolution if he ate too many burgers. It’s really distracting.

And the rest of the pilot goes as follows: Weather Man causes havoc, Tori tries to learn more about her powers, the gang deal with their “real life problems” and I lose interest with each passing minute. Rinse and repeat. Eventually, the League discovers that Dr Eno, Tori’s boss, is The Weather Man. They defeat him and Tori officially joins the team as Ice (Ugh! Just… just ugh!). And frankly, everything I have said so far only begins to cover how stupid this pilot is. Around every corner there’s a bad performance or an annoying plot point or a nonsensical character that manages to spoil every single scene in some way.

Okay, so what’s good about this pilot? Well, some of the effects are okay for the time, especially Green Lantern’s powers and Martain Manhunter’s design. But everything else is just crap! If this was an original sitcom about superheroes, I would be more kindly disposed to it. But as an adaption of the Justice League, it fails on nearly every level. The mockumentary style is unnecessary and detrimental and it’s more like a soap opera than a series about superheroes. In short, avoid it like the plague people!

But what do YOU think of the Justice League pilot? Is it a shining example of a superhero show or a shoddy sitcom of shame? Sound off in the comments or send us your thoughts on Twitter!