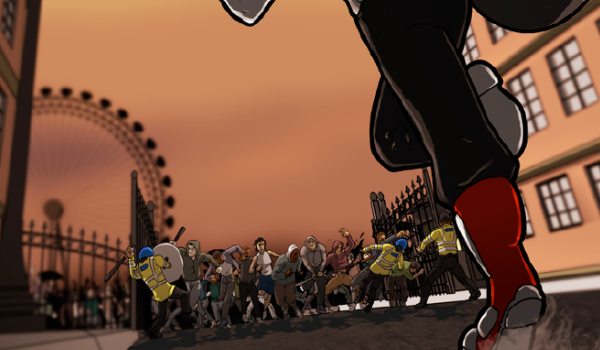 Dan Butcher‘s Vanguard continues at unfold at breakneck speed, only now there’s an end in sight…

Britain has fallen to pieces. As a nation, it’s embroiled in a conflict in Russia, there are food and oil shortages, and anarchy on the streets of Lambeth. Given the civil unrest of 2011 and the current situation in Crimea, it’s not hard to imagine the events of Vanguard as an extension of the real world, though, as Issues 7-8 demonstrate, it wears its pop culture influences proudly, too.

With villains that recall the best of Marvel and DC – the Bane-alike is particularly obvious – and an attitude to torture reminiscent of 24, Vanguard continues to be an unusual blend of pseudo-realism and outright fantasy. Superhero battles on the M40 take place alongside power struggles in Downing Street, but the series’ focus still doesn’t quite match with its ambition.

Butcher’s artwork is consistently good, but it, like the plot, occasionally loses track of the heroes amidst the action. Vanguard defector Gradlon, for instance, remains with Team XTreme. While team leader Mr. XTreme shows increasingly more signs of being out of control – his abusive relationship with team member Maxia is particularly nasty – there’s no real sense of how it connects to the main threat.

Vanguard Issues 7-8, however, do address the issue of the series lack of defining threat. It also manages to achieve genuine tragedy: an innocent life lost amidst the chaos. That being said, new plot strands are still being introduced – such as a new mission for Woden the druid. If Butcher can succeed in dovetailing all these loose ends, Vanguard could prove a great – instead of just noble – experiment.