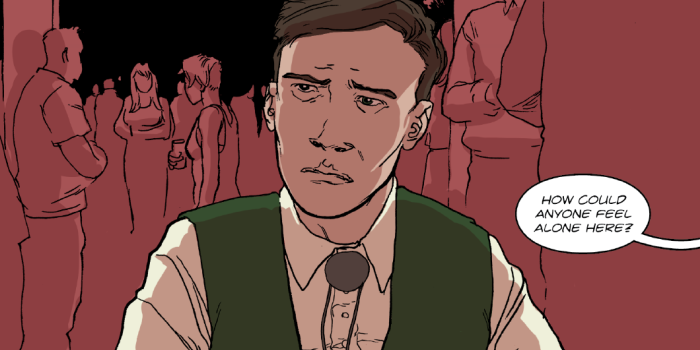 Every culture on the planet has its own thoughts about death, its own set of beliefs and rituals surrounding the passage of a human being from this world. The Empyrean is a hereafter for the 21st Century, though its own holy book – Afterlife Inc. – is perhaps a touch more entertaining than most holy books.

The newest installment, short story “The Everthere”, takes into the Victorian-style establishment of Ronan Deschard and Associates, Finders and Seekers par excellence. You see, according to the book of (Jon) Locke and Will (Tempest) – writer and artist – when you cross over, you carry literal baggage with you. If you’re looking for, say, a teddy bear or record player, chances are there’s one floating around the Empyrean. Some requests, however – keepsakes personal only to you – are impossible to recover.

“The Everthere” is a simple story about loss, the things we leave behind. You might be reunited with lost loved ones, but – whether you’re an RAF airman or a former caveman – there’s no recapturing life. With series protagonist Jack Fortune and his band of misfit functionaries nowhere to be seen, this short story feels more like maintenance, opening up another small corner of the world for people to see. Locke’s writing is, as always, characterful and effective, and, while Tempest’s character models might not be the most refined, his use of color – purple manna, the red blur of a crowd – is impressive.

“The Everthere” is all in the moments, the little things; appropriate given the subject matter. At the very least, it’ll tide us over till Afterlife Inc.‘s next neo-Biblical epic.

Are you a fan of Afterlife Inc.? If so, sound off in the comments or send us your thoughts on Twitter! If not, you can find out more here.