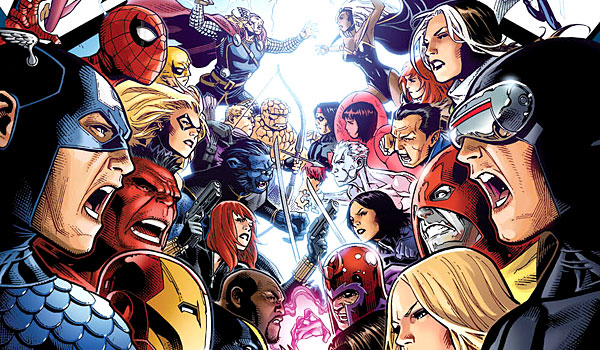 Being the Editor-in-Cape of this site, it may surprise you to learn that recently, I haven’t been reading much from Marvel or DC. That’s not to say that I don’t read them, but for the time being, I’m much more interested in indie comics and graphic novels.

There are several reasons for this (high among them being that Marvel and DC comics aren’t exactly cheap) but the main reason is that we’ve reached a point in both worlds where if you want to read any single storyline all the way through, you have to have read about a dozen of the preceding ones as well. You need to know the full backstory (which could span about 20-30 years’ worth of comics), be able to recognise all the characters (which can number into the triple digits), and understand all of the quick references, which, honestly, is next to impossible.

On top of that, the stories aren’t even that great anymore. It’s basically just “let’s find a way to pit X against Y and have them fight it out!” Planet Hulk, Civil War, Deadpool Kills The Marvel Universe, all had a heavier focus on action than plot. I’m sure there are plenty of other examples out there, but for me, no comic to date exemplifies this trend better than Avengers vs. X-Men.

The trade paperback collection of the main 12 issues of AvX (which excludes the “fight books” and other supplements) opens with a large chart with headshots of all the main characters, their names, and which side they are on (Avengers or X-Men) and lists virtually every A-list hero in the Marvel Universe, as well as a few B and even C-listers. The point being, the very first page lets you know that there are going to be over 50 characters in the story, and even the most seasoned reader will need a guide. Before we even get to the story.

In the wake of House of M and Scarlet Witch depowering all but 200 mutants, things aren’t going well for the X-Men. Almost all are living on the island Utopia under the leadership of Cyclops, who I have always found to be the dullest character in the Marvel Universe. Seriously, he shoots lasers out of his eyes and falls in love with psychics. He’s as two-dimensional and single-minded (single sighted?) as his name implies.

Anyway, apparently the Phoenix Force is returning to Earth, and its chosen vessel this time around is a young mutant girl named Hope (how appropriate). Cyclops has been training her to accept the power of the Phoenix, and it’s obviously bringing up a lot of emotions due to his experience with the Phoenix the last time around and the subsequent death of Jean Grey.

Now, for those of you keeping score, there’s already two major storylines providing the backdrop for this current one. While I’m familiar enough with the events of both, I haven’t actually read House of M or the original Phoenix Saga (yes, yes, shame on me). The point I’m trying to make here though, is that I didn’t know about either of those stories, I would be majorly confused by about page 10.

Now, the Avengers are also aware that the Phoenix is returning and are concerned about what will happen if that powers falls into the hand of the remaining mutants. Captain America especially seems to be concerned, which is odd considering he was a popsicle the last time the Phoenix showed up. Anyway, the Avengers decide that the best course of action is to land a helicarrier on the shores of Utopia and take Hope away from the X-Men, leading to the first of many, many epic battles between the two teams and fulfilling the promise of the title.

For the record, the fanboy in me loved seeing these two sides clashing, although some of the match-ups felt a bit uneven. At any rate, half a dozen fights later, everyone ends up on the moon, with Tony Stark firing a big gun at the Phoenix Force (because despite being a genius, his solution to everything seems to be “Let’s blast it!”). As a result, the Phoenix is split up into 5 different vessels: Cyclops (of course), Emma Frost, Namor, Colossus, and Magik (who I had to look up online because I had no idea who she was. Also, could have sworn Colossus and his sister both died a long time ago from the legacy virus…). Thus, the Phoenix Five is born.

Lead by the one-eyed douche-mutant, the Phoenix Five basically conquer the world and use their new Phoenix powers to try and end war, hunger, and poverty across the globe. A noble mission, but the Avengers don’t take to the new dictatorship and try to oppose the hugely powerful mutants. The rest of the comic flows in a rather predictable fashion of epic battles and few twists and turns until Cyclops’ inevitable defeat. However, once the Phoenix force is reunited in Hope, she is able to use her powers to reactivate mutants’ powers across the globe. Huzzah!

So, to recap, the writers have reused a major storyline from the 80’s to create a universe-wide storyline to completely undo the events of the most recent major storyline and bring the two biggest groups of heroes together into one amorphous, heroic blob of super-powered characters. As if the plots weren’t hard enough to follow already.

Now, don’t get me wrong, this series has its merits: there’s some pretty stunning artwork, especially when the Phoenix Five are around (each of their costumes incorporates the Phoenix symbol in some clever ways) and the fights between the two teams are pretty cool. But ultimately, the book left me feeling empty, like I had just eaten a really sugary cupcake.

Compared to some of the high-minded indie comics I’ve read lately, this feels rather lacklustre and unimaginative. Much like The Avengers film, there was little character development and a lot of reliance on the reader having the appropriate background knowledge.

What do you think about the trends of recent Marvel and DC comics? Is Avengers Vs. X-Men a prime example or the exception to the rule that you need extensive background knowledge to enjoy anything these days? Sound off in the comments or send us your thoughts on Twitter!