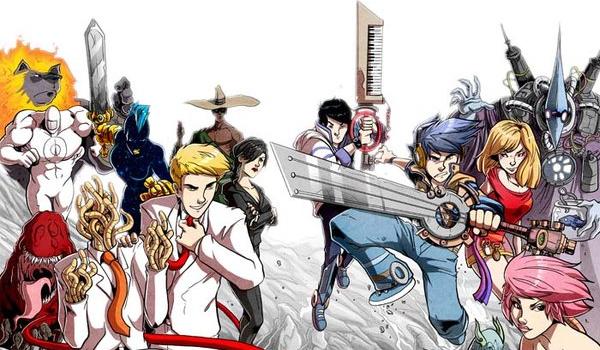 Visually delicious, told with strength and rather witty are some of the things that immediately spring to mind when reading The Heavenly Chord, a crossover between indie titles Afterlife Inc. and 7String. But before we examine the comic itself, lets have a look at the author’s final thoughts included in the back.

Writers Jon Lock and Nich Angell appear keen to remind the reader that The Heavenly Chord was very much constructed as a love letter to any grand Marvel/DC crossover, yet those aren’t the initial thoughts I pondered on when reading this comic. Perhaps it has more to do with the fact that I’ve read this title before reading any Afterlife Inc. or 7String, but The Heavenly Chord is an utter riot all on its own.

The Heavenly Chord itself concerns 7String‘s Zachary Briarpatch who, on his quest of vengeance after the death of his mother in the the world of Melodia, somehow ends up on the Empyrean – the city of the dead, run by Afterlife Inc. founder and CEO Jack Fortune. In true crossover fashion, the pair are at loggerheads at first, before the evil entity known as Requiem makes himself known, and wishes to bring the multiverse together in chaotic glory. Zachary and Jack must put aside their differences and take on Requiem in order to save both their worlds from total destruction.

Don’t be put off if The Heavenly Chord sounds too much like a typical comic book crossover, because that’s what it proudly proclaims itself to be. In doing so, the entertainment factor is revved up to extremes. It not only revels in its own conventionalism, but just about breathes fresh air into its well-worn plot structure via the types of characters/worlds who come together.

And plenty of that air is down to the mouth-watering artwork. Nich Angell provides the bright, bubbly visuals that bring the story to the gargantuan cosmic levels that the plot itself spins forth. There’s even a glorious pik’n’mix selection of artwork from a variety of artists at the back of this novel, featuring contributions from Vince Hunt, Shaun Debbie, Dani Abram, Nikki Stu, Mark Pearce, James Stayte, Jess Bradley, Ash Jackson, Jack Tempest and Will Tempest. Ash and Nathan Ashworth also provide a magnificent cover image.

The Heavenly Chord is huge slab of candy-coloured fun, and entices the reader to go and indulge in the separate adventures of Zachary and Jack. Any true believer of comics would be a fool not to check this out.

You can catch Jon and Nich at this month’s Thought Bubble, where they’ll be launching the physical edition of The Heavenly Chord! Plus, why not check out 7String here, and Afterlife Inc. here? And once you’ve read any of these titles, let us know what you thought of them in the comments or send us your thoughts on Twitter!