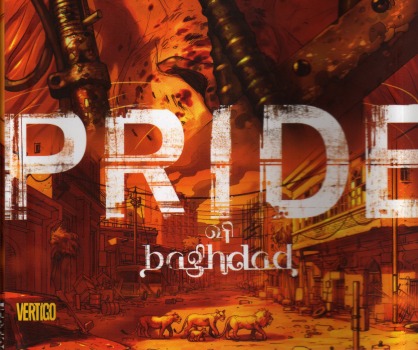 Many stories throughout the world of comics are told through the eyes of fictional characters living in a fictitious universe. Brian K. Vaughan and Niko Henrichon take us on a different path with Pride Of Baghdad. Set in the Spring of 2003, we get a glimpse of true event in the eyes of real animals. We begin inside of the Baghdad Zoo in which a bird tells a lion named Zill that the sky is falling. Zill dismisses the bird and looks up out of curiosity. He sees three U.S. Fighter jets flying incredibly low right over his head. He is soon approached by Safa, an older lioness with only one good eye. Ali, Zill’s cub, also comes running up exclaiming the exciting news of what they all just saw.

We’re then taken to two cages; one holding another lioness named Noor and one holding an antelope. Noor is trying to convince the antelope to join her plan of taking down the zoo keepers so they can all escape. The antelope soon realizes that the only thing that Noor could possibly want would be to eat the antelope, which soon leaves Noor left alone in her own cage. Ali quickly approaches to ask Noor what is happening and Noor tells Ali that nothing has happened. The two go back and join up with Zill and Safa. Zill tells the story of his pride and how he became separated from them, mentioning that he always loved to watch the horizon. The 4 lions are quickly startled as a dead donkey pummels to the ground in front of them. Zill looks up in a panic to see the zoo keepers sprinting away in sheer horror.

Before they know how to divide the donkey amongst themselves, a great explosion sends each lion flying back. Zill tells the three to run for their lives as another jet roars by, followed by a second explosion. They make it inside of a caged den and watch the thick black smoke engulf them. Safa wonders if they have all been killed, but is soon corrected by Zill that they are now indeed free as they gaze upon a chunk of the wall having been blown up with no further walls or fence to hold them inside of the zoo.  Noor and Zill take Ali with them as they plan to leave the destructed zoo, but Safa refuses to take her chances of being killed in the wild and decides to stay behind.

The three lions see chaos erupt as the other animals run in different directions. A giraffe exclaims happiness as she begins to tell the lions that the sky is opening. Her sentence is cut short by a bomb explosion which blows the giraffe’s head to smithereens. Zill quickly tells the two lions to get out of the way of the giraffe’s body that almost falls on them! He then notices another bomb is falling from the sky but cannot warn Noor and Ali in time. The bomb explodes near them, sending Noor and Zill in different directions. Ali is blown away by the impact and is caused to roll down a hill. Ali awakens surrounded by wild monkeys. They pick the cub up and begin to walk off. Ali shouts for help and is taken away to Monkey Island, a small fortitude of rocks compiled with power sticks and cables. Noor and Zill soon realize that Ali is missing.

Gathering their senses, Noor proclaims that the Apes must have him. They chase the captive cub down and eventually catch up to the Apes. Zill screams to the Apes to free her cub but the Apes refuse. A body of water has separated them now and the Apes know that the lions cannot swim. Suddenly Safa shows up on the back end of the wall of the island and once again warns the Apes of the immediate danger they will be in unless they give the cub up. Laughing at Safa’s old age and appearance, they begin to make fun of her. She sprints down and takes an Ape down, inviting the rest to fight. Some decide to attack and Safa quickly throws them into the water. The rest begin to scatter as Safa approaches Ali and brings her back to Noor and Zill.

Ali begins to complain of an empty stomach when Zill suddenly realizes an animal they can potentially kill and eat off in the distance. It’s the antelope from the zoo! As Safa quickly explains how to bring him down, Noor tells her to back off and let the antelope go. She then yells to the antelope explaining that this is their way of telling the antelope that the lions have kept their word and that they could have all been free from the beginning if they had agreed to her plan about escaping the zoo.

The 4 lions make their way out of the outskirts of the jungle and soon head in to the city. Noor and Safa notice a band of horses and the lions quickly take cover before they are seen. They are all very hungry and desperately need food. As Noor is about to attack, a bomb goes off nearby which frightens the horses and they begin to flee. Zill knows he is too heavy to sprint so he offers to stay behind and watch Ali. Noor and Safa quickly agree and take off after the horses with the thought of being able to at least catch and kill one of them. The horses eventually reach the entrance of a mansion and run inside. Noor soon enters and is overcome with emotion as she bears witness to a wall painting. It is of a lion that bears a resemblance to Zill. She becomes confused and scared. Safa soon approaches, wondering if this is indeed the den to the keepers of the zoo. They soon hear a weak voice from another room and go to investigate. They find a badly beaten and chewed up lion who is barely breathing. He murmurs how lucky Safa and Noor are to have not been enslaved since they still have their claws and teeth. His eyes soon roll over white as he passes on. As Noor and Safa ponder about how he was treated, a great voice who claims the name of Faser warns them of no escape. Lurking in the shadows before revealing himself to be a great bear!

Outside of the mansion, Zill and Ali notice a few horses walking around in circles. They suddenly hear Zill scream in terror. Back in the mansion, Faser declares that if one lioness give themselves up that the other will be set free. However, if they choose to attack then they will both die. Safa and Noor quickly take the bear on in a two-on-one battle. They are no match as the bear quickly throws each lioness off of him with ease. As he is about to end the life of Noor, Zill approaches and demands the bear to leave her alone. Noor also declares that he is a fighter and doesn’t give Faser enough time to think twice. Noor jumps onto the back of Faser’s neck and sinks his teeth into him. Faser lets out a roar and gives Zill enough time to get off and tackle Faser through a weak point in the wall. The both fall many feet before hitting the ground. Zill then signals Ali to come out and scare the horses, causing them to gallop toward Faser. They stampede over him leaving him to be hardly left with breath and life. Noor and Safa come outside and motion to end the bear, leaving Noor to proclaim that the bear should not have a quick death.

Ali finds a small hill of ruble which leads to the roof of a building. The 3 lions follow him up. Ali looks out into the evening sky and watches the sun set. Zill grins as he watches his son, before collapsing to the ground from a loud crackling noise. Safa notices a small bullet hole in Zills back. She and Noor realize that the zoo keepers must be nearby. She tells Noor to escape with Ali while she fends them off. Before taking another step, Safa is riddled with bullets. Her mangled body collapses to the ground as Noor and Ali watch in horror. Noor becomes enraged and beings to sprint towards where the shots were fired. Many guns are fired and both Noor and Ali get shot dozens of times. Their bodies are both hurled back many feet as the men with guns approach. One of them is in sheer shock. He then declares that he needed to put the lions down since he feared for his life as the lions began charging them. We are made aware that the men are not zoo keepers. They are U.S. soldiers. The story concludes with one soldier declaring that the lions could not have been from the wild…..they were free.

Altogether, this book is definitely a forgotten gem. The artwork is impeccable and the dialogue is very gritty. Both Brian K. Vaughan and Niko Henrichon deserve allot of credit for making such a touching true event into the form of a graphic novel. Many may not remember it or even know it happened. Those whom choose to read this book however will definitely need a few minutes to collect themselves after they finish it.

Have you read Pride of Baghdad? What did you make of it? Let us know in the comments section below or send us your thoughts on Twitter!