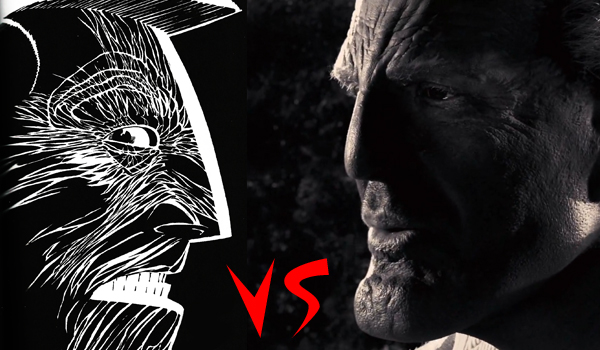 6. The Movies Adapt The Comics TOO Well 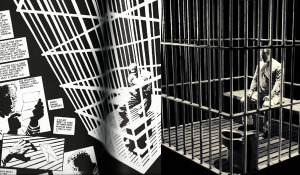 The Sin City comics have a clear advantage due to the novelty of the story and art style. Overall, the books took in at least seven Eisner Awards for their groundbreaking work. The films, while inspiring many imitators of their own, cannot claim the same credit due to Rodriguez’s painstaking frame-by-frame recreation of Miller’s panels. Rodriguez certainly deserved praise for his ability to accurately translate the imagery from paper to moving image, but ironically, he created a situation where pre-existing fans didn’t see anything they hadn’t already read. My film school buddy borrowed my Sin City volumes prior to catching 2005’s Sin City and came back stating that the experience was redundant for him because Rodriguez did too good a job of visually recreating the original source material. For neophytes, this category would result in a draw, but it was probably the loyal veteran comic fans that mostly fueled the buzz and filled the box office coffers. 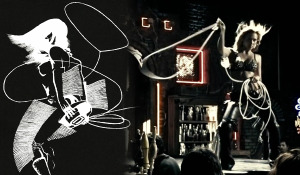 Another film benefit that ironically backfired were the huge celebrities filling out the cast. On the page, Nancy Callahan was a stripper elevated to divinity by her trademark silhouetted figure caused by the sharp lights worshiping her presence on stage. How is it possible that the illustration looks more animated than the live-action scene? On film, we see Jessica Alba in a terrible wig limply twirling a lasso with the passion of damp toast while adhering to the same non-nudity clause in all her contracts.

Hartigan is hard to recognize sometimes due to Miller’s highly-stylized drawing technique in That Yellow Bastard which makes Bruce Willis easier to follow, but the film is also so stylized that all the celebrities pop out more as themselves rather than as people who exist in that world unless caked in prosthetic makeup like Mickey Rourke as Marv. The result is Hartigan’s opening monologue sounding like Willis reading the comic to us like a bedtime story. There are some exceptions to the rule, but for every plausibly gritty Carla Gugino and Josh Brolin you get, you’re also obliged to accept an unconvincing Alexis Bledel and Jamie Chung both too wide-eyed and wholesome for their roles, and it gets distracting in a way a comic book can’t make you feel. 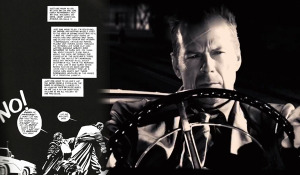 The comics get to have time-independent internal monologues. Most people probably don’t have thoughts or memories in speaking real-time, but for Miller on page, it’s easy. One full frame page of Marv walking down an alley gave an entire sidebar for internal thoughts. However, translated into film, you get Mickey Rourke walking down an infinite alley just to get all the words from the comics in. Actually, that scene’s monologue was wisely edited down, but the aforementioned Hartigan one-page back-story introduction led to Bruce Willis driving an awkward amount of time just to be able to say everything.

This was an artifact of the film-noir inspiration, a time when these internal monologues were commonplace, but when Miller began Sin City as part of Dark Horse Presents, he only had up to twelve pages to work with each month so he artfully filled the pages with words where they would fit, a feat that would devolve into awkwardness when translated back into a real-time scene. Internal monologues can still work for the modern sophisticated audience, but keeping them their length as written in the comic book doesn’t time succinctly enough aloud.