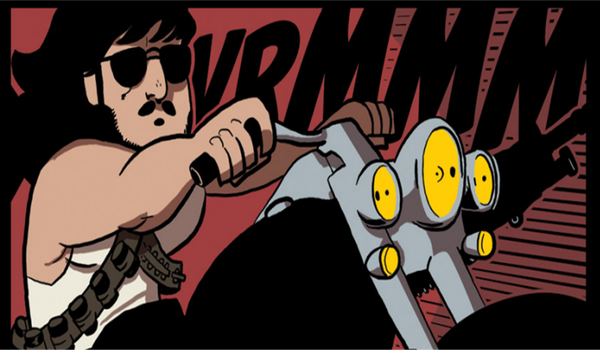 The appropriately named Holy F*ck is a four-part comedy/action miniseries created by Nick Marino with colouring by Daniel Arruda Massa, though this review only covers parts one and two. You know, in the delicate ocean that is religious parody, I’ve never imagined Jesus as a gun-toting, muscle bound action hero – guess what this comic does? Yes, the Son of God is portrayed here as an 80’s action hero but actually has a personality, starring in this amusing comic that steps on the toes of the easily offended of religious faith and does what could be considered outrageous things with some very familiar figures from numerous religions.

A nun name Maria opens the story by storming her way into a dodgy den somewhere in Japan, finding Jesus getting high with some naked women. I never thought I would see that with my own eyes, let alone writing this down. After scolding Jesus, Maria explains they have to save the world in ten days. It turns out a company named Polydynamus Inc. is run by a pantheon of various deities led by Zeus and Isis to kick off a long-planned nuclear apocalypse and then save the world through faith and old school worship. Needing an ally, Jesus and Maria fly to New Jersey to recruit Satan, who is a spectacled character dressed like a middle aged American dad, and in a gay relationship with Jesus. Obviously the smart thing to do in this predicament is to take it to the gods and blow them away with machine guns. However, when Maria is kidnapped by the gods, Jesus and Satan leap into action to rescue her.

Now let’s address the elephant in the room – these comics make fun of religion in general, particularly Christianity, with Zeus and Isis playing antagonistic roles, and numerous other deities appearing in cameos. One notable absentee is Muhammad, though that might have been intentional regarding recent tragic events in Paris. Nevertheless, the parodies are completely harmless and just meant to be for laughs rather than causing offence. I admit, despite not really being religious, I was surprised by the comic’s portrayal of Jesus. Satan, not so much.

The artwork is cartoony and colourful, though there is the noticeable alteration of style in some parts of the issues. The two issues so far have been very funny, with moments I laughed out, particularly when Jesus leaps onto a motorbike only to be beamed up by Satan into a spaceship to get him to the badguys’ lair quicker. Both issues also have an extra short story in the final pages showing Jesus in his early years and finding absurdities in his own status as the messiah, including his abandonment of his disciples after learning Mary Magdalene slept with Matthew and she punches him in the face. The second involves Jesus meeting Shen Zhi on a quest to slay a dragon. The outcome is hilarious thanks to the short and sweet use of the comic’s art.

Holy F*ck is definitely a unique comic that has some good laughs, fun visuals, and a lot of effort put into it by its creators. The first two issues are already available in stores, with the third recently released in March.

What future escapades could occur in Holy F*ck? What are your thoughts on this type of parody? Sound off in the comment section below or on our Twitter feed.