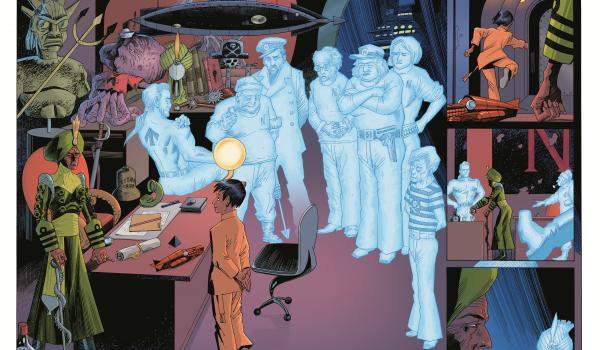 The final part of the Nemo trilogy set in the League of Extraordinary Gentlemen universe, “Nemo: River of Ghosts” continues the adventures of Captain Nemo’s daughter and successor Janni Dakkar as we find her in 1975, or is it 1941, or whenever (does the date still matter?), as she embarks on, potentially, a final voyage down the Amazon – a last chance to put to rest the ghosts of the past.

First off, Kevin O’Neill‘s artwork is as delightful as ever and a joy to behold. Each panel is time well spent. Which is just as well, as Alan Moore has run out of ideas (something which gives me no pleasure at all to say, being a huge Alan Moore fan).

Their previous outing in The League of Extraordinary Gentlemen: Century trilogy hinted that the series should probably have ended sooner, with criticisms that it was a glorified Where’s Wally? as each panel was filled with eye-candy characters and a story lacking the rest of the original League (now mostly dead). Moore’s pop culture references seemed to show that he was now too old or out of touch to really get post-modern culture and has become a moody bloke hiding away in Northampton while the rest of the world moves on. On a second read, Century has many positives and is well worth checking out. The Nemo series, however, is a disappointment and River of Ghosts is a work that says it’s time to close the book before Moore ruins the League of Extraordinary Gentlemen legacy for good.

Sure, there’s the usual cute intro pages and spoof ads (Clifford Irving‘s “Nemo The Last Science Pirate”, “True Sweat Magazine For Men”), but there are panels that seem straight out of “The Savage Land” to the point that I hoped Ka-Zar would arrive and provide a character of interest. Sadly he didn’t. And was that a spoof of a Jurassic Park” moment, or a homage, or just a steal? Who cares? A character named Mabuse? Great stuff, Alan, you’ve read Norbert Jacques and/or watched Fritz Lang (and Metropolis references also), thanks for those.

This is lazy work with characters that simply aren’t interesting. Moore’s Mina Harker/Murray in League of Extraordinary Gentlemen was a strong character and a worthy leader of the group; Quatermaine the opiated hero; a glorious Mr Hyde; a treacherous Invisible Man. Now we have Janni Dakkar who reminds us how interesting a character Captain Nemo was. As the story fades, we return to Where’s Wally? with Creatures from the Black Lagoon popping up and serving no real purpose to the story, as well as the now increasing numbers of pneumatic models that Moore seems to drool over in his growing and worrying fixation with pornography. Oh, and pseudo-Nazis as well, they’re always a sure winner, or maybe not.

The League of Extraordinary Gentlemen series (including the extraordinary Black Dossier) is work that stands as amongst Moore’s finest, but even the most die-hard of fans have found their patience sorely tested of late.

Moore has become the cliche of the grumpy old man. It’s showing in his work and this seems an increasing cash cow to fund Occupy Comics. By the end, I just thought “Whatever. ‘Liver of Goats’ would keep my interest more”. A pointless addition.

For fanboys who can see no wrong.

What did you think of Nemo: River of Ghosts? Sound off in the comments or send us your thoughts on Twitter!