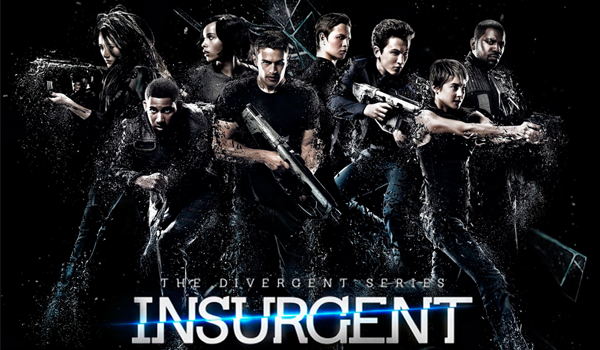 “The Diet Hunger Games” continue with part two of the Divergent series, Insurgent.  As usual, it is less engaging, less surprising, less impressive, and less everything than its most direct competitor of young-adult heroines fighting against dystopian societies.  If Divergent author Veronica Roth wasn’t intentionally aiming to create a lesser simulacrum of The Hunger Games, then she suffers from the bad timing or the sheer brilliance of Hunger Games that results in Divergent resembling a mere shadow.  It is a double-edged sword, however, as lacking the comparison would make Insurgent rather irrelevant to discuss at all.

When we last left the Divergent Tris (Shailene Woodley), she had just stopped a coup led by Erudite head Jeanine (Kate Winslet) who was mind-controlling the Dauntless to eradicate the ruling Abnegation faction.  If you’re lost already, no one will blame you.  Divergent is like high school chemistry in that the concepts are very basic but masked with unnecessarily complicated names to create the illusion of being very deep and complex while in reality being rather, excuse the pun, formulaic.  What makes it worse is Candor, Abnegation, and Amity don’t have the memorable zing of Gryffindor, Hufflepuff, or Slytherin.

Anyway, Insurgent begins with Tris, boyfriend Four (Theo Jones), brother Caleb (Ansel Elgort), and frenemy Peter (Miles Teller) hiding out among the anti-violence Amity faction but are forced to escape from Jeanine’s Erudite commando team who are hunting for Divergents.  While on the run, they meet with the Factionless who are organizing a revolution against the Erudite which is contingent on Four recruiting the now fugitive Dauntless survivors to join the cause.  Throughout the film, Tris is dealing with her own regret from the events of the first movie, and because of that, trust is tested, loyalties turned, secrets revealed, treasures discovered, and action ensues, and this only sums up maybe the first half of the movie.

In two hours, a lot happens, but it’s more quantity than quality, but I don’t mean it like how every Transformers sequel had longer, more plotless, and more pointless robot battles.  Instead, Roth empties her pockets of as many young-adult, angst-ridden, adventure novel story tropes as she can think of and jams it into this sequel, but each individual element lacks anything that jumps out as uniquely interesting.  You can peel red potatoes, Idaho potatoes, Yukon Gold potatoes, and eastern white potatoes and mash them into the same bowl but you’re still only going to taste “potato” in the end.  The story by the now 26-year-old Roth revealed that the author needed time to mature her writing and that the film producers and director Robert Schwentke should have taken more liberties to evolve the film into something more on par with The Hunger Games.  The last fifteen minutes of the film were honestly very intriguing and piqued our interest in the next installment, and that just shows that Roth has talent as a writer when it comes to world creation and the grand overarching plot scheme, but she needs to be more creative when it comes to stories that happens on the smaller, more personally relatable scale. 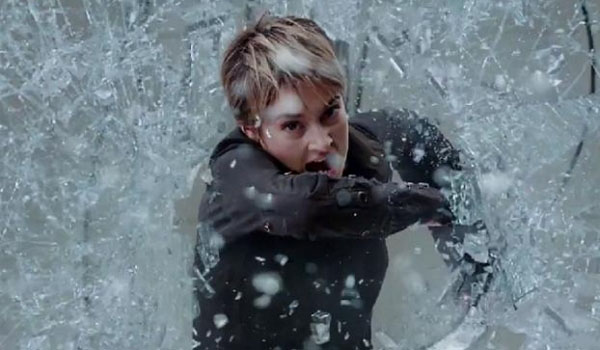 Woodley seems like a decent actress, sporting her pixie hairdo from starring in another book adaptation, A Fault in Our Stars, but the reason her performance pales in comparison to Jennifer Lawrence’s Katniss is that Tris, like the rhyming formless echo of Katniss that she is, is written in such a generic, tragic-hero way that everything Woodley tries to bring to the character through her acting is only what we’ve already come to expect from Person A in Situation B whereas in a 20-second closeup on Lawrence, Katniss felt shock, horror, helplessness, transitioning into anger, courage, and strength all without saying a single word in one of Mockingjay: Part 1‘s more memorable scenes.

The sound editing deserves credit for giving execution-style gunshots the loud pop to enhance their impacts, but some of the visual cutting couldn’t hide Woodley’s fake fighting skills.  Of course the director, the fight choreographer, and the actress herself can share the blame on that, but regardless of whose fault it was, the result is it’s become too hard to believe in Tris as the powerful warrior we’re supposed to respect her for being.  The music is decent but generic, and even the special effects, as spectacular in scale as they are, came from the Dark Phoenix school of telekinetic dis-assembly as seen in X-Men: Last Stand.

Insurgent is fast-paced, but predictable.  To maintain this theme of unoriginality, Hollywood greed will again split the third book of a trilogy into two movies, despite the fact that Allegiant presumably contains only roughly the same amount of plot as Insurgent, if the books’ page counts are of any indication.  Allegiant: Part 1 could be the franchise killer if the pace slows down enough that we’re given the time and opportunity to realize each plot element is so pre-packaged that we become aware that we should be bored.  If that happens, I’ll copy what my wife did in the theater for 80% of this movie, play Candy Crush on her phone.

Who would win in a fight between Katniss and Tris?  Is it unfair to compare Divergent to The Hunger Games?  What do you think about splitting the third book into two movies?  Sound off in the comments or send us your thoughts on Twitter!