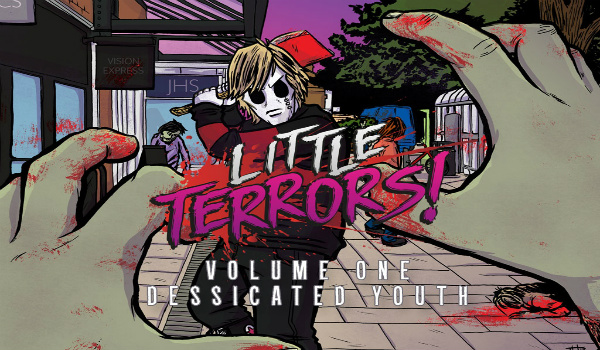 Halloween fast approaches. What are you going to do? Well, only you can answer that, but what we have done is have ye olde electronic sit down with Jon Scrivens, creator of Little Terrors! Check out all the monster mayhem at the Little Terrors! website, then head on over to the Kickstarter page and have a look at the awesome rewards that Jon is offering to all you generous souls out there. But…err…read the interview first.

AP2HYC: What was the inspiration behind Little Terrors!?

Scrivens: Little Terrors! was something I began creating after having a rather vivid zombie apocalypse nightmare. I was circling several ideas for a webcomic, and reading books such as Y: The Last Man, Hellboy, and The League of Extraordinary Gentlemen made me want to put a bit of a spin on the story’s concept.

AP2HYC: What sets it apart from other post-apocalyptic stories?

Scrivens: The vast majority of post-apocalyptic stories seem to follow a sole human survivor, and eventually groups of them struggling with rebuilding society and fighting. It’s more often about the people (which I love) but I wanted to add a twist to it; the survivors are also the monsters too.

AP2HYC: Without giving too much away, what are some of the changes you will be making for the TPB (trade paperback) release?

Scrivens: The biggest change is the recolouring of issues 1 and 2. There will be subtle dialogue tweaks just to bring the characters’ voices into line with how we show them now. 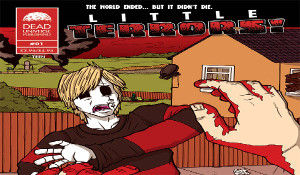 AP2HYC: Since this is an ongoing title, is there anything you can tell us about future stories of Little Terrors!?

Scrivens: The next arc explores the bigger picture. So far we know the zombies seem to be spread across the UK, with other mystical occurrences like Water Spirits in Japan. It also shows the group split up and potentially shows what happens across the world and maybe other dimensions too.

AP2HYC: I see you mentioned “gargoyle monks.” So…what are they?

Scrivens: The still unrevealed big bad creates them with some dark magic. They are literally lesser demon spirits possessing stone bodies. That’s why a good smack of a bat smashes them into dust!

AP2HYC: You’re the creator of Little Terrors!, but Patrick Cline is the writer. Tell us a little bit about the creative process that is involved in each issue.

Scrivens: We started our partnership on the “Origins” issue, and we discussed the concepts and the characters and then I left Pat to scripting. Unlike the original webcomic that I did solo, we’ve discussed and developed ideas further and in different routes, such as we’ve already revealed who killed Jonas. We didn’t even bring that up in the original.

AP2HYC: I like the rewards aspect of your Kickstarter campaign, especially the Lego mini-figure of Jonas. Did someone have to paint all those little guys?

Scrivens: I spent hours hunting down pieces that matched Jonas exactly. For the red and black striped jumper I’ve been painting with my Citadel paints on each one. No jumper is exactly the same! 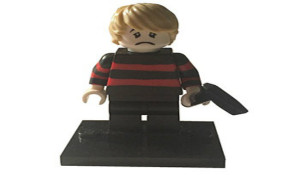 AP2HYC: This book will be chock-full of extras. As for the exclusive pinups, which artists are you most excited to be working with?

Scrivens: I’m excited to be working with each of the artists. Matt Rooke did the cover for the “Origins” issue, so I’ve already had the pleasure of working with him. His pinup is a thing of beauty!

Brett Uren of course drew the “Origins” issue and we’ve worked on Torsobear together, so I expect great things from his take on Damien. Phil Buckenham and I have just wrapped our yarn for Torsobear 2, so I’m certain his take on Frankie will be sublime.

Andy W. Clift is my long time table buddy over the last few years and he did a variant for issue 2, but I’m excited to see his developing style for Jonas. Josh Sherwell and I haven’t had the chance to work together, but I’ve been blown away with his work on The Kill Screen with Mike Garley and Mike Stock. He always seemed a logical fit for Dwayne, the shotgun wielding maniac.

AP2HYC: What are some of your all time favorite comics?

Scrivens: Being a child of the 80s I’m very much in love with Teenage Mutant Ninja Turtles (not the recent film, yuck!) and the recent TMNT run by IDW. Some of my favorites are The Legend of Luther Strode, Saga, Y: The Last Man, Preacher, and many of the volumes of The Punisher, especially “Welcome Back Frank.”

AP2HYC: What can we expect from the Little Terrors!/Bertie Bear crossover?

Scrivens: We’ve held back on the crossover as Andy W. Clift and I have been involved in so many other titles, anthologies and projects in the last year. When we get to it (hopefully some time in 2016), it’ll be a blend of the great stuff from both titles. Bertie needs to have a battle of sass with Bones; they’d lay the verbal smackdown on each other!

Alright gang, so what do you think? Are you getting a monstrous need to consume the first volume of Little Terrors!? Let us know in the comments section and on our Twitter page!