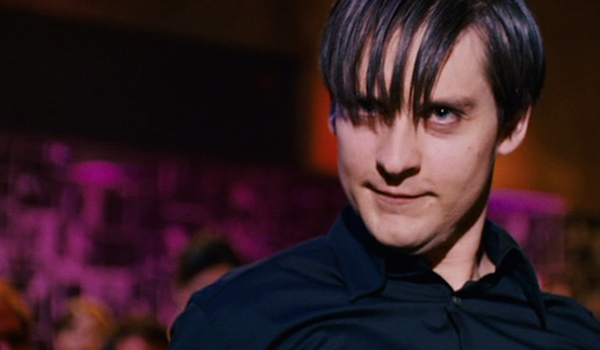 With his first two Spider-Man outings, legendary cult director Sam Raimi created the definitive cinematic representation of the character… for the time being anyway.

Raimi’s first two films were imbued with the charm, humour, and action that have made the Spider-Man comics so popular for so many years. Spider-Man and Spider-Man 2 were loved by critics and audiences alike, and many even consider Spider-Man 2 to be the best comic book film ever made. Unfortunately, with Spider-Man 3, Raimi stumbled, faltered, and ultimately fell.

The third film finds our hero Peter Parker, played by a returning Tobey Maguire, in a blissful relationship with the love of his life Mary Jane Watson. Blissful that is until an ooze-like alien ‘symbiote’ crash lands and attaches itself to Peter’s moped. Such rotten luck. This alien then attaches itself to Parker and starts to bring out his more evil tendencies, but only if you consider a comb-over and dressing in black evil. I know I do!

There is also the matter of Flint Marko who becomes Sandman, revenge-set Harry Osbourne who becomes the Green Goblin Mach 2, AND the introduction of Gwen Stacy and Eddie Brock/Venom.

Which brings me swiftly to the biggest issue with this movie… Spider-Man 3 is far too overcrowded. The film has no clear line and instead leaps from set piece to set piece, plot point to plot point. Characters come and go and are either just wasted or serve no real purpose.

The Stacy family, Venom, and even Parker’s turn to ‘the dark side’ are rushed through to get to the end. Even at a bladder-aching 139 minutes, there still is not enough time to let the story and characters breathe and grow in a way that feels organic.

This overstuffing would not be so bad if the rest of the film had been crafted as well as the first two instalments. Instead, we are given an abundance of cringe-inducing scenes and clichés designed to become mocking internet memes. One element which is often forgotten when insulting this film is that it actually has a soap-opera style amnesia plot convenience. Harry Osbourne hits his head in a brawl with Spider-Man and actually contracts amnesia. In a big budget follow-up to the greatest comic book film ever made. Just think about that for a second. Actually, don’t. This film does not really deserve to be pondered, which just makes writing this article all the more painful.

The one thing everyone does remember when insulting this film is Parker’s dancing. A routine he does twice. I can’t even talk about it. Just Google it. I’ll wait.

This would make a terrible enough film without even mentioning the retconning of Uncle Ben’s murder and therefore the retconning of the event that made Peter Parker become Spider-Man in the first place. Without spoiling it… actually screw it; Flint Marko killed Uncle Ben by accident.

This is not a clever twist that changes the perception of an already transpired event, this is incredibly lazy writing, done with the sole purpose to connect Sandman with Spider-Man in the simplest way possible.

The entire Venom saga was handled terribly. It is a master-class not only in how not to make a comic book film, but how not to make films period. Not only would I rather watch paint dry, I would rather watch dried paint. Sure, Raimi was supposedly forced to cram in Venom and this clearly irked him, but he still should have been able to make a better film than this. Nobody comes away from this film clean, and that includes the audience.

Although, it should be said that one positive is that they somehow made a fantastic trailer. Google that before you Google the dance routine and gawp at the fact they are the same movie.

What did you think about Spider-Man 3? Do you agree that it was a travesty of a film? Let us know in the comments or tell us what you think on Twitter.