Home » SPIDERTEMBER: Spider-Man Toys I Would Have Killed To Own As A Kid 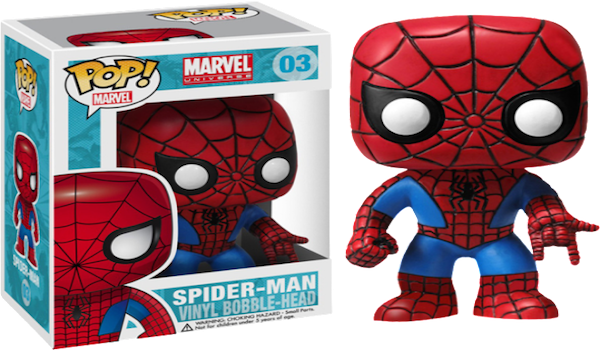 Ever since I was a kid watching the Spider-Man cartoon on a weekend morning in the early 90s, I have loved the web-slinging protector of New York with his witty remarks and flashy fighting style that was a major part of my weekends with Grandma. One of my favourite toys as a kid was a stuffed Spider-Man with velcro hands that my Auntie Amy got me on a trip to Leeds from a charity shop. Even though it wasn’t the current toy or an action figure, I would use it to battle the evil monkey and various other stuffed animals I had.

Now that I am an ‘adult’, I still find myself lusting after some of the newer toys that the eight-year-old me would of loved to own and the adult me would definitely put amongst my collection of Lego and Nerf Blasters.

One of the most impressive toys to come out recently is the Hasbro Masher figure series where children can create superhero mash-ups by mixing the arms and legs of any mashers figures to create the ultimate wolverine clawed, web-slinging, hulk smashing hero. 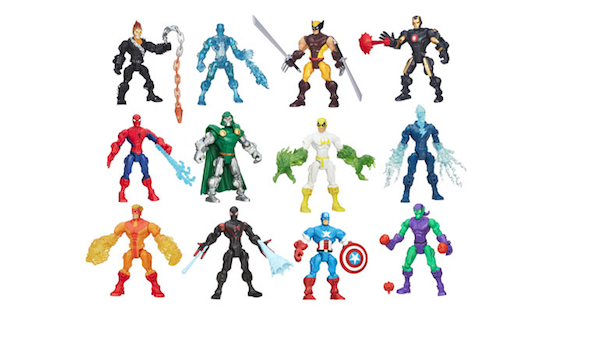 Marvel Super Hero Mashers Spider-Man Vs. Rhino Figure Pack (rrp £24.99) comes with two figures with missile launcher, webs, and other swappable accessories. This double pack as a kid would have provided me with infinite creative mash-ups for battling the fierce armoured Rhino and web-winged Spidey against my other figures.

The great thing about these guys is you can also get Avengers, X-Men, and other Marvel figures as well as Transformers which all mash together, which would all me to make the ultimate Wolverine/Spider-Man/Optimus superhero.

Most collectible figures are 6-12” realistic moulded figures with various action features that come in big window boxes that people never open, but this isn’t really my cup of tea as I tend to like things like Disney Infinity or Lego Superheroes where the characters are more stylised, allowing me to actually use them.

This is where the Funko Pop! Vinyl figurines shine out from the rest for me with their colourful cartoon figurines and their varying poses, repaints, and funny enlarged bobble that look great on my office desk or randomly placed on book cases to stare at people.

Pop! Vinyl has most Spider-man characters including Venom, Sandman, and other villains, but the figure I would love to get my hands on is the 2099 Spider-Man (#81) as I love the futuristic blue costume.

The classic Spider-Man #03 is the one that most reminds me of the Spider-Man cartoon, and will probably be my next office companion as I love the bobble-heads and it’s only about £10!

Action figures may be great for decorating my desk or as kid where I used them to create awesome battles against the WWE hoards and evil stuffed animals, but now I find myself mainly lusting over toys with a bit more fire power such as the item I never had as a kid. 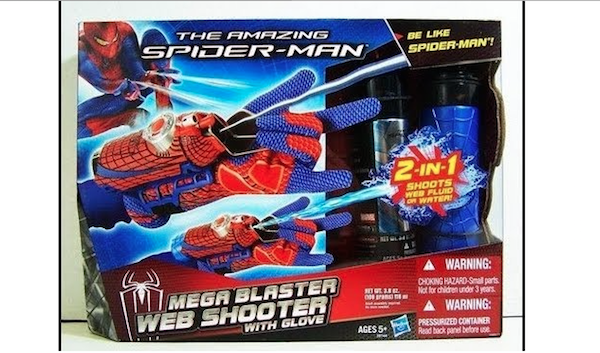 The classic web slingers from 90’s that fired silly string were banned in my house by my mother as the silly string stained clothes and would dry and stick to furniture never to be removed, but to my joy they are still available with an added bonus: they now also can fire water so I can annoy my girlfriend without any worries of stained clothes.

The Mega Blaster Web Shooter (£24.99rrp) is the one I would go for as it is similar to the original blaster but can now use standard silly string cans, unlike their previous generation, which were known for the costly refills.

This little blaster is something that would make up for the ban imposed by my Mum all those years ago and would go great with that Spider-Man morph suit I have had my eye on for a while, but mainly would be used to drive my girlfriend crazy and take the boredom out of watching Ghost Hunters.

Lego is without a doubt my favourite toy collection ever made, and the Marvel Superheroes Spider-Man sets created for the Ultimate Spider-Man series are no exception. Though I would love to get my hands on the massive sets with sprawling structures and massive vehicles, it doesn’t really fit in my display case or on top of my monitor. 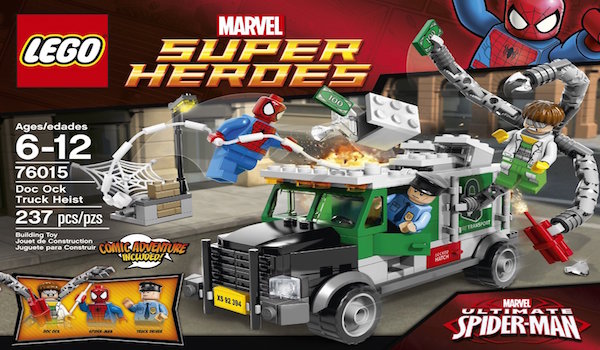 LEGO Superheroes Doc Ock Truck Heist 76015 (£19.99rrp) is a simple set that fits perfectly on my desk or display case. Even though it’s a small set, it includes three mini-figs, a vehicle with exploding roof safes, and a Spider-Man launcher that all make this an awesome little set.

Although the Rhino and Sandman Villain Team-Up set is so much bigger, I love simple little Lego sets as it shows you what the Lego guys can do to get so much action out of simple pieces.

Marvel’s Amazing Spider-Man franchise has a massive range of toys and collectibles that have all been really well engineered, and although these are but a few, I love the retro web blaster the most (even though my heart should be with the Lego) because it gives me something that I didn’t have as a kid and probably is even better than the original!.

Are there any particular Spider-Man toys you wanted in your youth (or even nowadays)? Let us know in the comments or on Twitter!