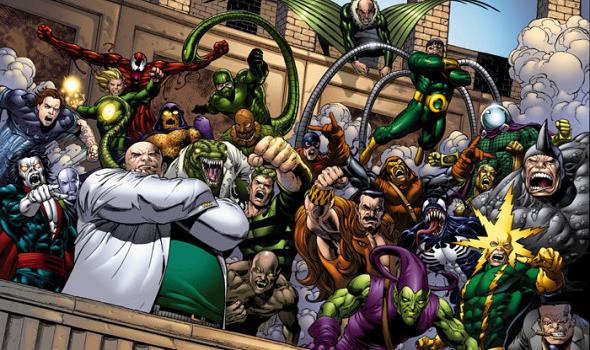 Spider-Man has probably the biggest, baddest, meanest amount of enemies in the Marvel Universe, and now having introduced the web-slinger himself into the MCU the writers and creators now have a pick and mix of the best villains to feature in their films. All of them are dangerous in their own special ways; The Green Goblin killed Gwen Stacey, Doctor Octopus took over Spider-Man’s body for most of a year and Kraven famously “killed” him. So if they get to be in the films, they need to be done right, but if they are they can change the MCU as we know it.

They can all be introduced easily in the already expansive movie universe, as shown in Captain America: The Winter Soldier with Falcon’s mechanical wings we can easily be introduced to Doc Ock’s robot arms or Green Goblin’s hover board. Hell, they can even be introduced in a similar way like in the five Spider-Man films (as long as it’s not Venom in Spider-Man 3, we don’t talk about that.) In fact, one major Spider-Man villain has already been introduced; Kingpin. Played amazingly by Vincent D’Onfario in the 2015 show Daredevil he has already been set up as a formidable foe for MCU Avengers, Kingpin is the ultimate crime lord, he has most of New York in his pocket and can easily be put into the movies. Although not slamming a head in a car door way he was in the TV show which might not go down well with the kids. But his potential is limitless, especially now we have Spidey on the block who has clashed with Kingpin in the comics so many times. My guess is that the filmmakers will hint at Norman Osbourne in Civil War and make him the main villain in the standalone Spider-man movie, a way I’d like is really subtle hints such as the Oscorp building in the background or even a TV interview with him on in the background, as long as it doesn’t takeaway from the main focus. Anything as long as it’s not the Green Goblin from The Amazing Spiderman movies, again lets not talk about that.

A character I would die to see in the MCU is Venom, my longtime favorite villain of Spider-Man. And with Guardians of the Galaxy setting up the universe and alien species the symbiotes can easily be added to the MCU, they could go with the Eddie Brock’s classic looking Venom or Eugene Thompson’s “Agent Venom“. Personally either is great and Agent Venom would fit in better with the look and feel of the Captain America films, but to face off against Spider-Man, classic Venom with the split mouth and weirdly long tongue is all you need. But on a side note Agent Venom is currently a member of the Guardians in the comics so if they ever need to change the roster in the films I’d be happy with the addition of him somehow.

Another fan favorite Spider-Man villain who should get some screen time is Mysterio, a master of illusions and tricks he may not be main villain material but he definitely deserves some time on the golden screen. I just want to see their costume adaption of his, I’ve always loved the fishbowl for some reason. As long as the creators don’t re-use the same villains from the previous Spider-Man films he will feel fresh and exciting, they’re great and some were done really well but others were not (Venom). And as an audience we’ll get bored seeing the same characters, that’s whats kept the marvel movies so fresh over the past couple of years, the influx of villains. I mean, we got The Winter Soldier, The Mandarin and Ultron all in just over a year. I’m not saying cut them out completely, especially Spider-Man’s arch nemesis Green Goblin, but don’t go so heavy on them.

And as we’re talking about Spider-Man’s enemies we can’t go without talking about the Sinister Six, a team up of some of Spider-Man’s greatest enemies. We almost had a spin-off movie headed our way but that fell through when Sony cancelled The Amazing Spider-Man, I was a bit disappointed at that because even though they weren’t great movies I still enjoyed them for their action. And I love team up movies, Avengers Assemble was a life changer for me. And what’s better than a team up of Super-heroes? A team up of super-villains, because face it, we all prefer the villains. And if we get to see the Avengers vs the Sinister Six I may literally die.

The various villains of Spider-Man’s world can change the MCU, and definitely for the better. We’ve already seen a main Spider-Man villain in the MCU and they can definitely expand the already growing roster of villains with some of the best in the Marvel Universe. I’m certainly excited to see what happens and you should be too.

What would you make of the Spider-Man villains appearing in the MCU? Sound off in the comments section or send us a Tweet!