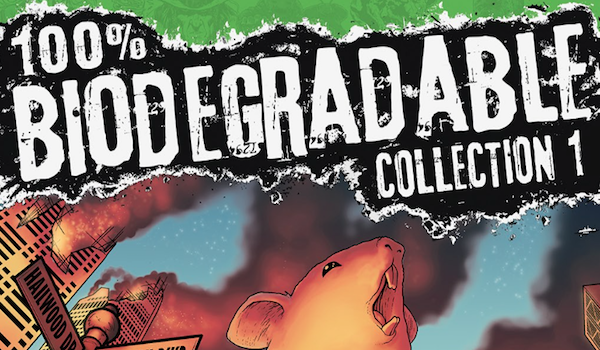 With this collection, you get the best stories from Issues 1-6 of the quarterly digital sci-fi anthology; whether it’s giant rampaging rodents, paranormal ice cream salesmen, hard-boiled detectives, adulterous martians or kung-fu kitchen antics you’re after, there’s a little something for everyone!

In addition to this, Issue 10 of the 100% Biodegradable digital anthology has just been released on both DriveThruComics.com and Comicsy.co.uk, priced at $0.99/69p

Diving into Issue 10 of 100% Biodegradable, you’ll witness a bunch of truckers tear their way across Hell’s Highway in an attempt to bring aid to those who can afford it, a lone soldier battling invaders and isolation, two workshy layabouts facing off against the psychotic android scourge known as “The Milk Machine”, Travis Wilson crossing the hazardous mutant-filled wasteland of post apocalyptic London in the fourth instalment of the Death Duty series created by John Freeman (Crucible, Judge Dredd Megazine) and Brett Burbridge, and the return of popular detective series Sideburns by Jim Alexander and Jon Haward.

The 30-page quarterly digital anthology is available on Drivethru here, for $0.99, and on Comicsy here, for 69p.

A ComiXology release will follow at a later date. Stay tuned!