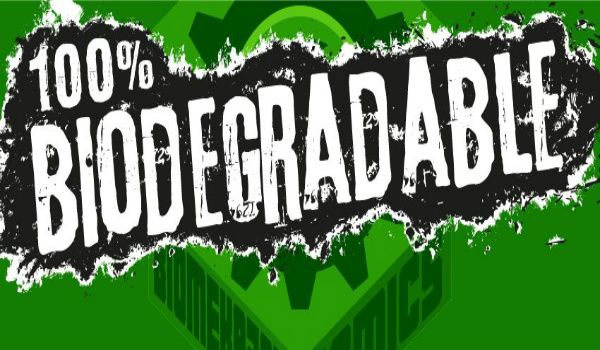 100% Biodegradable has been one of the strangest and most original anthology comics in recent years. We spoke to creator David Hailwood to discover what he has in store for future editions of the series:

AP2HYC: So, why is the series called 100% Biodegradable? Will the comic itself disappear into the earth if left outside for a long time?

Hailwood: I think the anthology is far more likely to crawl up your pyjama leg whilst you lay sleeping, and build a nest in your brain. It’s a slippery little beast of a comic, full of biological oddities and mutated atrocities; a place where gigantic mutant guinea pigs rampage gaily through the streets, and paranormal ice-cream salesmenreign supreme.

On a practical level, choosing a title that begins with a number puts us at the top of the comic listings, which is always a bonus!

AP2HYC: Can you give an overview of the tone and style of the series?

Hailwood: Being a marginally twisted individual, I tend to gravitate towards darkly humorous strips. There’s also a fair share of twist in the tale sci-fi stories, b-movie horror, and gritty detective pulp.  To keep the comic accessible to new readers, the majority of strips are self-contained, though there are plenty of recurring characters, such as The One Eyed Wench, Sideburns and Marren Kane. We also have an eight part sci-fi series from John Freeman and Brett Burbridge, titled ‘Death Duty’, which is exclusive to the pages of 100% Biodegradable.

AP2HYC: Can you talk a bit about all the different creators and how they came onboard?

Hailwood: I’ve been knocking around on the indie comic scene for close to twenty years, which has allowed me to rub shoulders, tentacles, and various other body parts with a lot of ridiculously talented individuals. The main bulk of 100% Biodegradable creators (Tony Suleri, John Kirkham, Neil Alexander, Simon Mackie) came stumbling groggily and bleary-eyed from the pages of the Temple APA (a comic art amateur press association, started in the nineties by Kyle Kimmons); their contributions, combined with John Kirkham’s tight design work, gave me strong foundations upon which to build the anthology.

I was also keen to invite a few professionals on-board, as it’s a good confidence boost for new creators to find their work alongside the pro’s, and it helps catch the eye of readers and reviewers when there’s a few‘known’ names in the credits. I first encountered Jim Alexander and Jon Haward’s ‘Sideburns’ inside the pages of ‘Bulletproof’ (a short lived anthology from editor Matt Yeo), and Graeme Neil Reid’s ‘First Impressions’ strip made me chuckle heartily when it appeared in ‘Meanwhile…’ (a brilliant anthology from Soaring Penguin, which has recently resurfaced). They were kind enough to let me republish these classic strips, which paved the way for more professional creators such as John Freeman, Alan Burrows and Kek-W to get involved.

As word spread, submissions began to trickle in of their own accord, and a few staples of the indie comics scene (Paul H. Birch, Jimmy Furlong, Chris Sides and Chris Redfern, to mention but a few), were added to the ‘regulars’ roster, along with promising new talent such as Ken Reynolds (now my Assistant Editor), Brett Burbridge and Denis Vermesse.

Although 100% Biodegradable started off as a UK comic anthology, thanks to ComiXology’s international reach we’ve begun to attract creators from across the globe, accepting submissions from France, Australia, Canada, Poland and various other countries. In fact, we’ve been inundated with so much high quality material that we’ve been forced to increase the page count (at no extra cost to the readers) from 30 to 36 pages, as of the next digital issue. 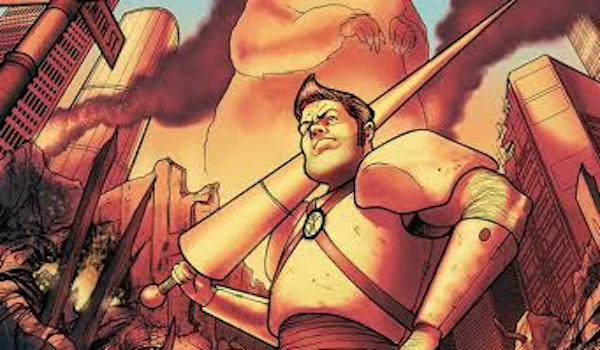 AP2HYC: Were the creators given free range to each tell their own original stories?

Hailwood: As long as the submitted strips contained a strong element of sci-fi/fantasy/horror/adventure, then the creators were given free rein to be as inventive as they liked. There’s a few restrictions imposed on the content in order to keep the comic suitable for a ‘15+’ audience (we attempt to keep swearing/nudity/excessive gore to a minimum whenever possible), but we have been known to make exceptions if the strip’s too good to pass up.

Originally we were looking for self-contained strips only, though John Freeman pitched so many brilliant series ideas (all off shoots of his ‘WarWorldz’ shared world project, devised back in the nineties when he was an editor at Marvel UK. More info is available here, that we could hardly say no. 100% Biodegradable is very much a comic that’s shaped by its contributors, and it’s evolving all the time.

AP2HYC: What makes 100% Biodegradable stand out from other horror anthologies?

Hailwood: Well, for one thing, it’s more of a sci-fi/fantasy/horror hybrid than straight-out horror, bursting at the seams with strong, entertaining stories displaying a diverse mix of art styles and a wicked sense of humour.

With 100% Biodegradable, it was never my goal to create the most startlingly original anthology around; simply the best comic I could produce with the resources and creators available.

Back in the nineties when I started out, almost all small press/indie comics in the UK were created and sold using a combination of a work photocopier, and the small ads section in Comics International. Things have progressed a tad since then; there’s a range of social media sites available for getting the word out, and a wide variety of high quality digital and print on demand choices (Comicsy, Drivethru and ComiXology being our main three). These days, it doesn’t have to be a costly experience to achieve professional looking results, if you have the time, patience and good will of the creators.

AP2HYC: Do you plan to continue 100% Biodegradable?

Hailwood: After two years as a digital only anthology, we’ve only just expanded into print with our first collection (containing the best material from issues 1-6, squeezed into 140 pages), and we hope for this to be a regular occurrence; our next collection is already in the process of being assembled and will feature content from issues 7-10. We’ll continue to collect all four quarterlies released after that, for as long as the earnings from sales will allow.

I’ll also be investigating the possibility of releasing single print issues of 100% Biodegradable, and there’s a few one shots and mini series from myself and Tony Suleri in the works, such as Marren Kane and Technofear.

Currently our long-term goal is to reach issue 22 as a quarterly, so we’ve still got another 3 years ahead of us yet. It’s possible we might continue after that as a yearly anthology, though it all depends on available time/stamina, and popularity of the comic.

The first 10 issues of the quarterly anthology are available in digital format at the following places, for just 69p/$0.99:

The first print collection is available on Drivethru Comics in premium format, for £15/$22.99. If you already know and love 100% Biodegradable, let us know in the comments section or send us a Tweet!