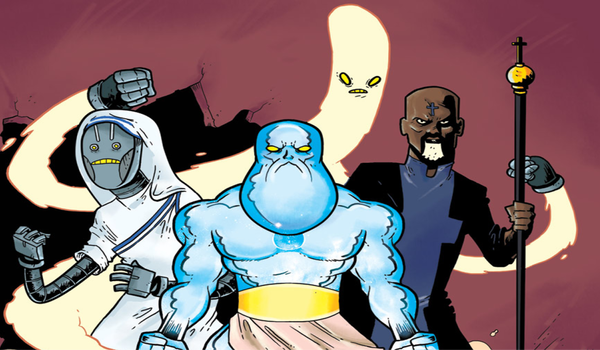 Several months ago, I reviewed the four-part action comedy comic book Holy F*ck created by Nick Marino and Daniel Arruda Massa. Now, the first two issues of the sequel have arrived. The fun concept behind this comic book is that Jesus is a gun-toting action badass who is very down-to-earth and as human as you and me. In this version, he is bisexual, in a relationship with a gay, Ned Flanders-esque version of Satan, and has a nun named Maria as a moral compass and action sidekick. Jesus did a lot of things that would enrage many Christians, but I think that was the clever thing about the first volume of Holy F*ck; it took a humoured look at certain aspects of religion and society and depicted Jesus and other religious/mythological figures as superheroes, which is a very creative idea. However, reading Holy F*cked feels like a different comic compared to the first, or at least for a while.

Following the death of Zeus and prevention of the Apocalypse, Jesus has since gained a more mundane, normal life. He lives with Satan in Los Angeles and appears to have a job selling skateboards, judging by his van. Jesus returns home to find that Satan is pregnant. I guess being a demonic mythological figure allows the Devil to change genders on a whim. Either that or he is a hermaphrodite. Jesus is thrilled, informing Maria, who is no longer a nun but maintains her do-gooder service by running a homeless shelter. Everything is pretty good for the son of God. Though, a new threat lingers in the ruins of Mount Olympus in the form of Zeus’ son Hercules. Seeking revenge on Jesus, Hercules is enraged when he learns his nemesis is going to have a family and decides to worm his way into his life by posing as Maria’s boyfriend.

When I first read the two issues, I thought the style and atmosphere was a little more blunt in terms of comedy. It lacked the subtlety or poignancy of Holy F*ck, and was being crude for crude’s sake; though it does say on the cover that the comics contain violence and nudity so at least it gives you a head’s up. However, as the issues progressed, I did find myself enjoying it more. Jesus is just viewed as a normal guy and no one is going gaga around him, which opens the question, “What if Jesus was around in the modern day?” No doubt some certain areas of the world would treat him as the Messiah, and others as a radical. But I quite like this version of events.

Hercules makes an interesting villain since he is essentially the evil counterpart of Jesus, even down to resembling him, being the son of a god, and has superhuman powers. However, he is an anti-villain, deeply mournful over the loss of his father, family, friends, and his home thanks to Jesus and co. And he even seems to care for Maria, openly calling her when he kidnaps Jesus with the intention on destroying him using dynamite and a nuclear power plant.

However, it looks like Holy F*cked is going the way of The Avengers, Maria summoning a team of superpowered individuals to aid in the rescue of Jesus: The New Apostles. We have Cosmic Moses, a Dr. Manhattan-like character, robotic Mother 2resa who can appear as a pixelated character preventing hackers and internet trolls, the Secret Pope who appears to be the Van Helsing of this comic and has art style akin to Sin City, and finally, the Holy Spirit, who battles evil aliens and/or mutant creatures. All of them are summoned via glowing holy crosses on their hands, banding together for what looks to be an exciting clash of the titans in the next issues of Holy F*cked.

Give us your thoughts on Holy F*ck and Holy F*cked. What do you think of the series? Sound off below or leave us a comment on our Twitter feed.