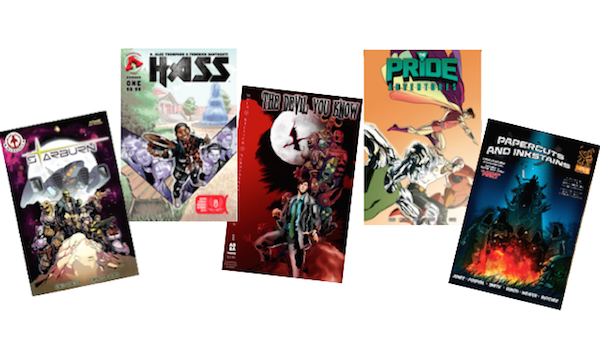 It’s that time of year again. The time of year where you’re frantically scrambling to find the perfect gift to bequeath unto a family member or loved one.

An armful of awesome indie comics!

Creative? Yes. Thoughtful? So long as you buy the right one for the right person, definitely! Something that’ll keep ‘em occupied! Hell yeah! Whether they’re slow or fast readers, you’ll have at least a few minutes to scurry to the fridge and gorge on the food and beverages you vowed to save for everyone.

Here are just a few of the awesome indie comics we think will make great gifts this holiday season!

This series is particularly good if you’re not 100% sure what someone specifically enjoys but at least know the general genres they’re typically into: sci-fi, the supernatural, maybe even a dash of dark comedy. Each of the four issues (technically three issues but the most recent was so massive it was split in two) are written as anthologies, meaning they’re essentially comprised of a few short stories each.

In my opinion, you can’t really go wrong with this. The absolute worst thing is to buy a comic for someone that they end up not enjoying. It’s often hit or miss where the single-story comics are concerned, and if it’s a miss both you and the recipient will end the holiday season slightly bummed. Which is why Papercuts and Inkstains is the perfect way to go! With Papercuts and Inkstains, a gift-receiver is at least three times more likely to enjoy it, simply because there are more stories to enjoy.

What makes Papercuts and Inkstains so enjoyable is the fact that you get a small taste of multiple stories and themes that are long enough to be well-rounded and resolved, but short enough that you don’t lose interest. You get the most bang for your buck, side note one of the stories in #2 literally involves an all powerful buck hell-bent on taking over the world, and can hand it off knowing that you’re kind of giving multiple gifts in one. Way to go!

If you know even the slightest bit about what a friend or loved one typically enjoys reading, Papercuts and Inkstains might be the ideal comic to buy them.

You can buy the Papercuts and Inkstains Bundle in the Madius Comics online shop and get Issues #1, 2, 3A, and 3B!

The Pride / the Pride Adventures 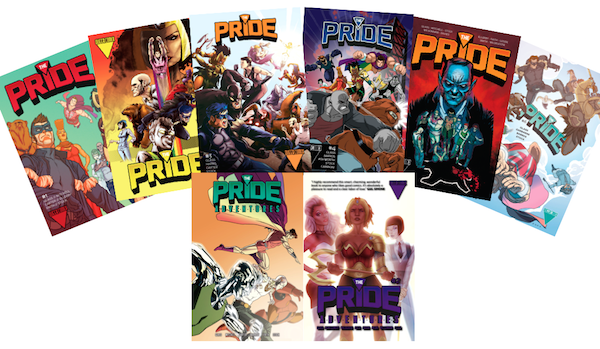 It’s important to emphasize the fact that absolutely anyone can be a superhero no matter their race, gender, or sexual orientation. It’s equally important to share said fact with as many people as you can, meaning the Pride Adventures, and the six-issue the Pride series, are an ideal batch of comics to purchase and gift this holiday season.

It’s rare to find a comic whose content is just as striking as its visuals. Both the Pride and the Pride Adventures combine striking colors with equally powerful social commentary, both of which seem to accentuate one another and serve to keep readers’ interest. Both the visuals and the content are symbiotic, boosting one another in order to convey varying moods and effectively ensuring that specific messages are coming across.

While the Pride is a team of superheroes, the focus of the comics has less to do with fighting super villains and more to do with combating the prejudices and discrimination that members of the LGBTQ community often face. The comics do a superb job at highlighting the pain that is felt by the LGBTQ community due to the, often poor, way they are treated, while simultaneously highlighting the strength and support within the community itself. Much of the stories within the issues deal with life lessons that many people would benefit from reading, namely because it is often easier to understand a point that is being when reading about other people and characters who are learning such things.

The Pride series would be a particularly suitable gift for the younger generation, who we all know will soon be in a position to make changes based on the positive and insightful messages that the comic series delves into.

Be sure to head over to The Pride shop and get your hands on the series before handing them off to some lucky people on your gift list!

Firefly? So thirteen years ago.

Guardians of the Galaxy? A year and a half is like a full decade in Marvel time!

But if you know someone who’s jonesing for some space outlaw adventures, you’re in luck because Starburn is a comic that exists and… you guessed it: It’d make a sweet gift for a fan of misfits in space. A bit closer to Guardians of the Galaxy in terms of the eclectic crew that’s gallivanting across space, Starburn is a fun book that thrusts readers into whichever adventure our main characters find themselves in.

The concept of intergalactic outlaws isn’t new, but Starburn puts a fresh spin on it with the inclusion of a lizard-esque ship captain, a handful of humanoids, a character that looks like space’s version of a wolf, and what is essentially a space dinosaur. Each character is distinct and diverse, and successfully make space pirates seem wholly entertaining. Each issue of the current four packs in an abundance of twists and turns that are only accentuated by the bright artwork that accompanies the solid story.

What’s especially great about Starburn is the fact that it’s a series that can genuinely be enjoyed by most ages. There’s a nice balance between story/character development and fast-paced adventure, which makes the comic a delightful read for anyone with even the slightest interest in space outlaws. Despite having a clear genre, the stories themselves would likely manage to keep the interest of readers who don’t normally gravitate towards sci-fi space adventures.

Starburn is a thoroughly enjoyable read that would surely keep anyone entertained, thus making it the perfect indie comic gift this holiday season.

All four issues of Starburn are currently available on Comixology! Go get ‘em!

Have you or someone you know been in search of something that could be described as being a cross between American History X and Romeo and Juliet?

Then boy is Hass the right comic for you to snag this holiday season. Because, despite how odd that combination may seem, Hass manages to successfully integrate some of the major themes of each well-known story into a single comic that is rife with violence, romance, and, most importantly, sharp writing.

While being an entertaining read in its own right, the fact that Hass also delves into larger issues makes it that much more appealing as a comic. The issue of racism becomes prevalent in the comic, which is important since it’s one that is equally relevant and present in our own society. What’s especially appealing about the approach Hass takes with the subject is the fact that it isn’t underlying, it’s a central focus and makes it clear that racism is unfortunately still very much something that exists today. The realism of Hass is one of the main draws of the comic, which expertly creates a world inside the comic that can successfully reflect some of the genuine issues in our world.

The combination of fantastic artwork and a storyline that doesn’t seem forced is what’s especially great about Hass. At no point does the plot seem to drag on, nor does it seem unrealistic as certain characters begin to interact and set-up the rest of the series’ over-arching themes and storylines. The balance between real-world issues, and entertaining comic stories, is key to the success of Hass, and is what makes it a comic that is worth sharing with others.

Get your hands on Hass #1 while you can and be sure to get it off your hands just as quickly by gifting it to someone else! You can get it in digital and print format so, whether your friend is tech-savvy or old-school, they’ll be sure to love it!

The Devil You Know

Let it be said straight off the bat that this is not a comic that a small child should be presented with on Christmas morning. It’d likely scar them for life and make Santa Claus synonymous with Satan and other traumatic visuals. Basically what I’m saying is that: THIS IS NOT RECOMMENDED FOR THE WEE ONES.

That being said, The Devil You Know is a comic that would be a pretty solid gift for the 17+ crowd. It has striking visuals, a dark plotline, and enough intrigue to maintain readers’ interest and keep them entertained throughout.

We’ve seen heroes become villains before, in fact, the Dark Knight gave us a pretty solid quote about it: “You either die a hero, or you live long enough to see yourself become the villain.” The Devil You Know takes this concept to a whole new level by setting the central character, Greydon, on a mission to take down Satan and seek revenge for the death of his family. Seems relatively cut and dry but the caveat to the whole situation is that, upon destroying Satan, Greydon himself will become the new lord of the underworld.

The majority of the characters are all morally grey, almost none can be considered genuine heroes including Greydon himself, but there’s still something that makes you want to root for them. It’s easy to acknowledge the general d!ickishness of them while still hoping that they manage to reach their goal and find whatever messed up closure it is that they’re looking for.

The Devil You Know is a fun bit of entertainment that would be particularly appealing for those interested in the genres that tend to gravitate towards the supernatural and death. It’s like a hodge-podge mix of themes from Dexter, Lucifer, Constantine, and The Punisher, making it an ideal gift for any individuals you may know with an affinity for revenge, death, and a little bit of hell

Be sure to grab a hard copy of Issue #1 of The Devil You Know from AA88 and then snag all of the following issues over at Comixology!

These are just a few of the awesome indie comics I think someone would be pretty psyched to receive as a holiday gift. If none of these necessarily fit your style, be sure to check out our COMICS section for the lowdown on some of the other sweet comics we’ve reviewed, perhaps you might find another that strikes your fancy!