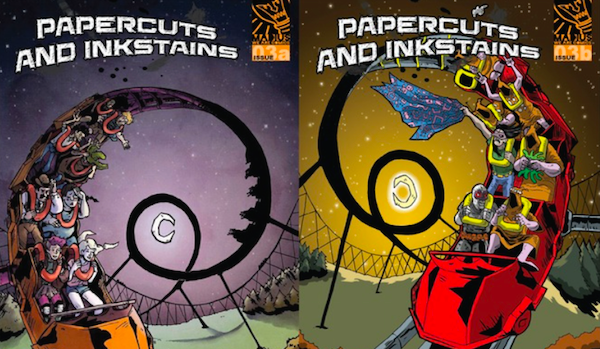 Christmas came early for me in the form of not one but two new issues of what’s becoming a much-beloved comic for me: Papercuts and Inkstains.

I suppose technically it’s really just one mega-issue that was smartly divided into two appropriately-sized ones (hence the 3A and 3B in the respective upper right-hand corners). Call them what you will but, whether you consider them to be one issue or two, you should definitely call them awesome.

I had the pleasure of reviewing Issue #2 of Papercuts and Inkstains a few months ago and, full-disclosure, it was one of the first reviews I’d ever written where a comic was concerned. Add the fact that Papercuts and Inkstains is a series of the indie comic variety and you can understand why I might have been a little wary about tackling the review.

Lucky for me, I loved it.

I could probably wax poetic about it, which I kind of did in the aforementioned review, but I’ll just skip having to run to a thesaurus to find more words for, “awesome,” and instead just reaffirm that Papercuts and Inkstains #2 was the ideal comic to bring me into the fold and introduce me to some of the wonderful indies that I’d previously been entirely unaware of… meaning when the latest issue(s) from Madius Comics popped up in my inbox I was pumped.

With good reason too because, once again, I found Papercuts and Inkstains to be a thoroughly enjoyable read and a visually eclectic look that created a solid and symbiotic little anthology.

Before I get into reviewing the content of each issue, and the individual stories within them, I need to take a moment to give all the kudos to the incredible visuals that are the 3A and 3B covers. Drawn by Rosie Packwood and Mike Smith respectively, the cover pages of Papercuts and Inkstains 3A and 3B are (dang it, where’s that thesaurus I mentioned?) awesome. I personally am a sucker for some eye-catching and eye-popping artwork and each issue has both.

Once again the introductory visuals do a rather superb job at cluing you in to what should be expected from Papercuts and Inkstains: a dark, fun, rollercoaster of a comic anthology. Portraying the characters from the individual stories as the poor souls strapped into the rollercoaster was ingenious and I can’t fully articulate how good these covers look side-by-side. Also, major kudos for keeping the theme consistent for each. One could have easily decided to instead focus on doing a cover specific to the content within each part, but I think it was a smart decision to utilize the rollercoaster on both to visually point out the fact that, though split in half, 3A and 3B are cut from the same metaphorical cloth, rather, paper.

Anyways, done gushing about the covers. Let’s get into the actual stories! 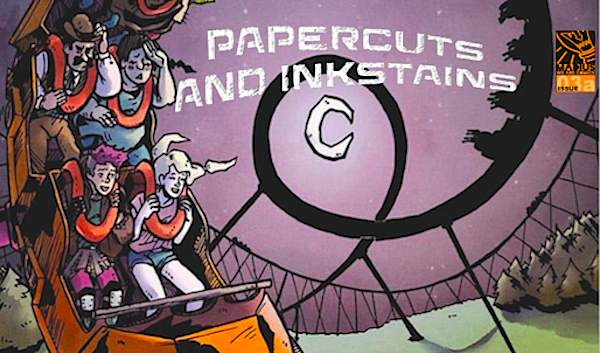 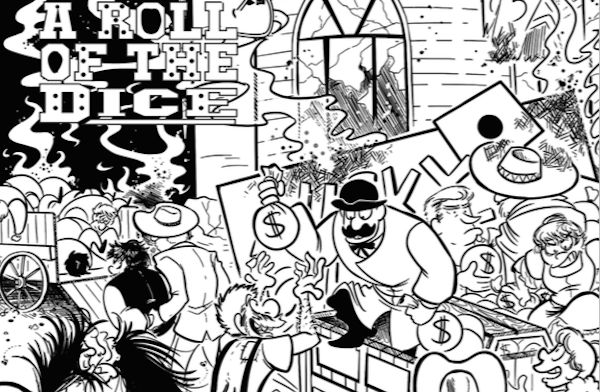 The story itself is a fun little heist tale that brings together a ragtag group of bar patrons and sets them on a mission to scope out a new, business-stealing, casino and, “rob the bastards fer all they got.” There’s kind of an old-school western feel to the story, empty saloons and drunkards wearing cowboy hats, which only aids in accentuating the ridiculousness that is a group of eclectic people, in a bar, getting together and planning to take down an enormous casino.

“A Roll of the Dice,” is essentially what I imagine Ocean’s Eleven would be like were it set in the Wild West and spearheaded by even more absurd characters.

It’s humorous in the sense that most of the characters are bumbling idiots who I wouldn’t trust to gamble in a casino, let alone rob one, and does a solid job of emphasizing this and not taking itself seriously in the least. The muscle of the group is a woman in a dress, the bomb expert’s mustache looks to be bigger than he is, and one of the team members is so drunk that I’m still not totally sure what his skill set is. All in all, it’s a fun read that focuses on the everyman triumphing over the bigwig corporation. Never a plot that gets old.

As far as aesthetics… I don’t know what it is about Sprecher’s art but, for me, it’s wholly reminiscent of some of the old-school Looney Tunes cartoons I watched as a kid. There’s a simplicity to the style that, for one reason or another, reminds me of the classics from Warner Brothers that would always air late at night when it was way past my 5 year-old self’s bedtime. I just kept thinking about Yosemite Sam from and all of the chaos that he got into on screen while scanning the panels of, “A Roll of the Dice.” It’s a pretty cool thing to draw something that is able to invoke such feelings of nostalgia in complete strangers, so my hat goes off to Sprecher for the accomplishment.

What I’d also like to note is one technique that was particularly helpful where in distinguishing the present from the past. The subtle rounding of the panels is a smart way of differentiating the times because it’s noticeable enough that it only took two for me to realize the implication, without being so overwhelmingly apparent that it distracted from the story.

I suppose you can’t really have a sci-fi/horror/fantasy/miscellaneous anthology series without one.

Thankfully, “Vampire Wonderland,” is not of the typical variety, focusing almost more on the sarcastic internal dialogue of the main character than the actual vampires. Something that I myself am appreciative of. It’s hard to take a general idea like vampires, which has been used so often as of late, and give it large enough spin to make it interesting but Sambrook and Jones manage to do it.

Mostly because, again, the vampires are more of the subsidiary focus of the story.

The story is a quick one, not necessarily for the reader so much as the actual events in the story itself likely occur over a span of a few minutes. “Vampire Wonderland,” essentially just details how Sabi (the central character) gets from point A to point B with a hoard of vampires hot on her tail. While it could have easily been a boring affair, the story manages to pack in a decent amount of action and an abundance of sarcasm and humor. There’s something weirdly satisfying about reading puns as dad-like as, “Hey, man, lend a hand?” (in context you’ll get it) and equally satisfying are the few tidbits of information we get about the epidemic and the importance of Sabi in fighting the epidemic.

Fans of the Walking Dead will likely appreciate the necessity to decapitate the monstrous vampires, and will especially enjoy the fact that, like Michonne, Sabi uses a Katana sword to do it. 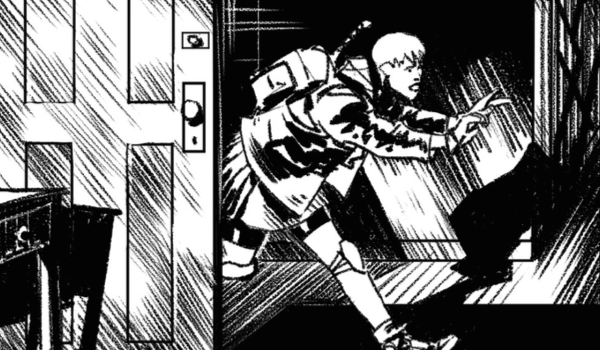 The visuals are ones that likely wouldn’t have worked as well had it not been for the actual content of the story. It’s a dark story, meaning the thick line work and heavy contrast between white and black serves to accentuate the doom and gloom of a world overrun by vampires. Similarly, because much of the comic is actually quite action-heavy, Moore seems to have focused more on motion than facial details, something that, again, actually proves beneficial. 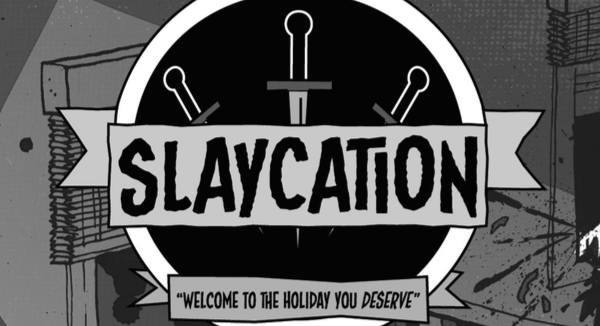 I’m not sure if this means I should see a psychiatrist but… I think, “Slaycation,” was by far my favorite of 3A’s stories. Both in terms of plot and aesthetics.

“Slaycation,” is picture-perfect until it most decidedly isn’t, following a group of friends as they travel to a remote cabin… almost immediately putting readers on edge. Because we all know what a remote cabin in the woods means for a group of young friends on vacation, right?

“Slaycation,” pretty quickly brings with it a huge twist that I didn’t anticipate and immediately takes a detour from the standard horror formula. The detour is a good one guys. It’s a really, really, good one. So good that I’m moving on to discussing the visuals because I don’t want to spoil it in the slightest.

Packwood’s visuals are just as Grade A as the twist in the story, due large in part to the fact that they have a generous combination of white, grey, and black. It’s not a two-tone comic, which means that there’s a significant amount of detail and shading within the line work. I have a particular affinity for visuals that strive to distinguish characters and setting through shading, and really enjoyed the way that Packwood managed to make so much standout despite not using any color.

As a whole, Issue 3A of Papercuts and Inkstains was another solid one from Madius. There was a nice progression from, “mostly harmless,” to, “graphically violent,” and, though not necessarily suited for a younger audience, the comic managed to remain humorous and fun throughout. I’ve said it before but the sarcasm and dark humor that always finds its way into Papercuts and Inkstains tends to be the most consistently good thing about the series.

Read about Papercuts and Inkstains 3B on the next page!