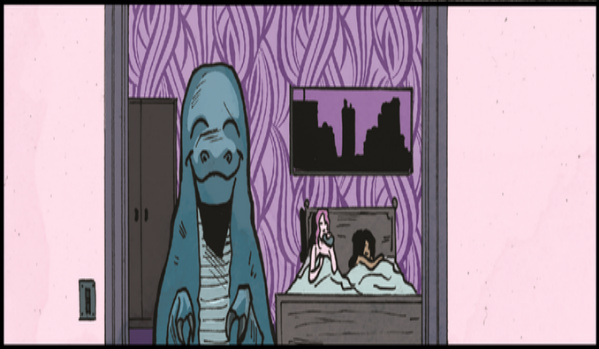 Doc Dino. That title alone had me sold. A doctor who is also a dinosaur? Now that there’s some good old fashioned creativity. We spoke to creators Chris Welsh and Tom Ward to find out more. Check out our interview, and while you’re at it, contribute to Doc Dino here.

AP2HYC: I understand that the idea came from a party?

CW: Yes. Well, sort of. Tom and I have these monthly meetings that we call Pitch Parties. The intention behind them is to make sure that we’re both working on new stuff, all of the time. We get together in a pub, have a few drinks, and pitch ideas at each other. Some are good, some are bad. Some go nowhere… but every now and then, something like Doc Dino comes out.

I honestly don’t recall who came up with it, but it sparked something in us. We both loved the idea and decided it should be something we collaborate on.

TW: We’d been drinking so yeah, let’s say it was a party, that makes it sound like we have friends and get invited to stuff. One of the initial parts of the concept was that we wanted to create a comic where reviewers opening line would be “This should be the stupidest thing I’ve ever read, but actually it’s pretty good.”

AP2HYC: So, why exactly is a surgeon a dinosaur?

TW: Surely you mean why exactly is a dinosaur a surgeon? We are who we are man. Rexley comes from an aristocratic family so he had a lot of pressure put on to him to have a respectable career, which really boiled down to either medicine or law. After butting heads on the wrong side of the law in his rebellious teen years that door was pretty much closed to him. Besides, he genuinely enjoys helping people and he has access to prescription drugs so he’s pretty happy being a surgeon, until, y’know, he gets fired at the start of the book.

CW: There isn’t really a reason, per se. I wish there was, but the truth is we just found it really funny and ripe for development. In the story itself there is some justification – he’s tied to his old ways, stuck in the life of an aristocrat who has never really had to want for anything. In the world, he’s a literal and figurative dinosaur. People want to replace him with new blood.

AP2HYC: Are dinosaurs a common occurrence in this world?

CW: There are a few, his father for example, and a couple of acquaintances, but generally speaking he’s the sole dino in his story. And he wouldn’t have it any other way.

TW: Not really, some of the richest dinosaur families managed to avoid the extinction event but no one really makes a big deal about it. Rexley likes to be the centre of attention, other than his dad’s leg there’s no other dinosaurs in this book. Terrence Dactyl, tactile legal advice doesn’t show up till the sequel, He’s Rexley’s lawyer and is a Pterodactyl obviously.

AP2HYC: Would you describe this as a medical drama with dinosaurs or is there more to it?

CW: Though it is essentially ER if Clooney was a dinosaur, there is so much more to it than that. It’s our loving homage to everything we love – 80s action film plot lines, dinosaurs, revenge, Jurassic Park, and the current batch of adult-orientated cartoon series such as Archer, Rick and Morty etc…

AP2HYC: It’s our personalities, our influences, and our senses of humour put down into a comic book.

TW: Sure, Doc Dino is about a dinosaur who practices medicine but it’s really about friendship, lost love, courage, self esteem, hubris and overcoming the past. It’s an emotional journey that also has a bunch of laughs. I think people will find Doc Dino surprisingly relatable, there’s a little Doc Dino in all of us, especially if he’s checking your prostate.

AP2HYC: And I understand that it won’t be for kids?

CW: Maybe it’s suitable for some really awesome kids who know how to handle adult content, but generally no, it isn’t. There are adult themes. Naughty words, some violence, just stuff you probably don’t want to subject your six year old to.

There’s nothing super gross or seedy going on, it’s by no means the Serbian Film of dinosaur based buddy-medical-drama comedies. It’ll probably be rated 15+ so you probably wouldn’t want to give it to your kid but they’ll end up stealing it off your book shelf and giggling to themselves when you go out. But then again parents buy their kids Grand Theft Auto and Call of Duty, and all them new fangled video games where you can shoot prostitutes and shit, and one time at a comic convention a 12 year old told me to go fuck myself because I suggested my other comic Merrick: The Sensational Elephantman probably wasn’t for kids and then his mum told me to sell it to him anyway, so what do I know? 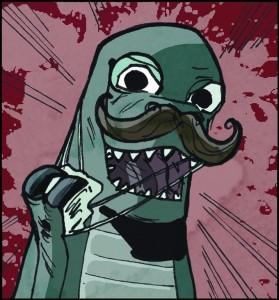 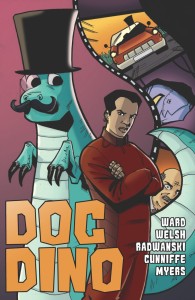 Have you contributed to Doc Dino‘s Kickstarter yet? Let us know when you do in the comments section below or send us a Tweet!