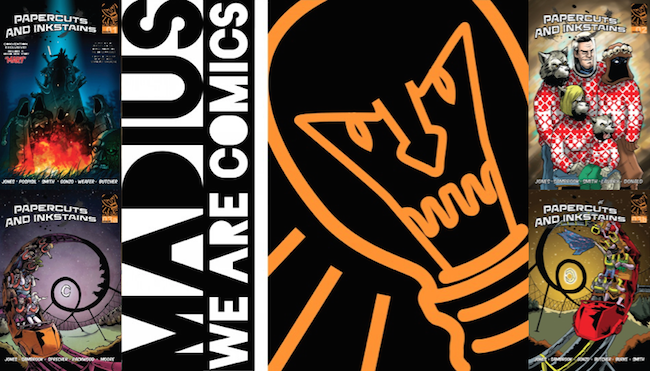 Check out our interview with Madius Comics’ Rob Jones and Mike Sambrook, the masterminds behind this diverse comic series!

AP2HYC: I think the obvious first question should be: Where did you get the idea for Papercuts and Inkstains? It’s such a wholly unique comic, largely due to the fact that it provides multiple stories in each issue, and I’m curious as to what the inspiration behind it was.

Mike Sambrook: It started out very much as Rob’s baby, until I muscled my way in. It was originally a column Rob was putting together for our friend Lee over at Intercomics, exploring Rob’s first steps into comics, joining the fandom as an adult, and the challenges and uniqueness that it presented.

Rob Jones: Yup, it was a sort of social experiment as a late twenties guy getting into comics, which lead to me writing a scene with John Constantine in a bar, arguing with some guy; people thought I’d ripped it out of a script when I hadn’t. After that, I kind of got the bug of writing scripts. Mike was an active reader and would participate in all the polls/questions etc. I would put to twitter and such, and we got on really well, so we decided to have a go at “living the dream!” We wanted to have a play with ideas and tropes, and experiment with the idea of writing comics and the whole process!

MS: Exactly. The whole idea of Papercuts is about experimentation and trying out new things. The short story format lends itself to this really well as we get multiple opportunities in each issue to explore different visual aesthetics and genre options. We like to try and keep people guessing throughout each issue and we like to try and surprise people. Multiple stories per issue really lends itself to helping us achieve this. Papercuts is a brilliant way for us to stretch ourselves, take storytelling risks and gives us a tremendous opportunity to work with an amazing array of artistic collaborators.

RJ: Plus, it allows us to hone our writing abilities, see what works, what doesn’t, and tweak and adapt as we go. If people are really receptive to something, we can see about making it a multiple strip story, if not, they’re pretty self-contained, and as such we can leave them off with that single story.

AP2HYC: Going off of that, what’s the process of actually selecting which stories make it into each issue? I assume that there are many that don’t make the cut (correct me if I’m wrong), and I’m wondering what you take into account when deciding what should be included in each print. Genres? Length? Visuals? Storylines?

MS: Generally, we are always writing. Both Rob and I are forever sending each other emails, badgering each other with phone calls and erupting out of each other’s toilets with crazy half-formed ideas. We like to throw inspiration at each other and see what sticks. Then sooner or later something will just land for both of us and there will be an element that just catches our attention and fascinates us. I mean, this can be for multiple reasons, whether it is a clever narrative trick, a solid character, or sometimes just a joke we want to build around; and that’s it – we are off and running. We tend to work via Google drive, and for mine and Rob’s collaborative pieces we just slowly form them together, tweaking and amending until we are both happy that it lands.

For the most part, the stories are written by either Rob or me, but we’ve also had a brilliant superhero story from our own internal force of nature, Nick ‘The Gonz’ Gonzo. When it comes to our solo pieces for Papercuts, it is just all about communication. We make sure we include each other in the process to ensure that nobody spends too much time wandering down a blind alley and try to help each other out to make sure every story is as good as it can possibly be.

The length of the stories is largely out of our hands. Of course there is some flexibility but we aim to have three stories in each issue, and with the page count largely fixed at around 30 pages, it gives us a pretty solid framework. Each story we aim to be between about 6 pages and 10. But as always, there are exceptions. When it comes to stories and genres, we don’t like to think there are any restrictions at all; like I said earlier we like to keep people guessing as much as possible – sort-of an “anything’s possible” sketch show with an unlimited budget. But then, just as you start to get comfortable with jokes, we will throw something different at you. In regards to stories that don’t make the cut, not so much. As I mentioned, communication is a massive element of what we do, so we are always involved in each other’s stories long before they are finished. That way it ensures we are all happy with the direction each piece is taking and there are no nasty surprises for any of us.

RJ: Except that one nasty surprise that one time involving a jellied eel, some long johns, and a blowtorch, but we worked out the kinks there and it was fine…

AP2HYC: As someone who absolutely dreaded the obligatory group projects in school, I’m thoroughly impressed by how many people are involved in the creation of this series. I’m especially curious as to how you co-write such an eclectic batch of stories and manage to make them all cohesive. Is the writing process usually pretty symbiotic where Papercuts and Inkstains is concerned… or is the final product something that emerges from a gladiator-like battle where the victor takes control?

MS: Well, there has certainly been many a gladiatorial battle between us, but it is never anything to do with stories. That’s just a weekend hobby. For some reason Rob jumps at every possible opportunity to wear knee-length sandals. Really though, group work is the reason we do this. There’s no way we could do any of this without the support and input of each other. The whole Madius crew is just brilliant; they are a never-ending tidal wave of enthusiasm, positivity, encouragement and support. Writing can be an incredibly draining experience and in a lot of ways can be very isolating. I think working as a team like we do really helps limit the negatives of that and helps everything gel together into a cohesive voice.

RJ: We are very fortunate in the fact that Mike and I seem to “get” one another very well. And so it makes for a pretty smooth creative process. I mean it’s even gotten to the point where we can finish each other’s…

Nope, must have gone to go buy more stilts… But still, we are lucky to be able to work so cohesively together on so many things, and it’s nice that we play with different genres (we’ve got a comic which is Jam and Jerusalem meets the Thing coming up, plus an issue which even has a THEME!) so that’s been great. I think the only time we ever bicker is when it gets down to the wire and I’m lettering pages and Mike is constantly editing, grammar policing and such, but that’s more because I am a huge grump. Mike is a cracking editor and by lettering ourselves, we can edit right up until print day, which really helps. 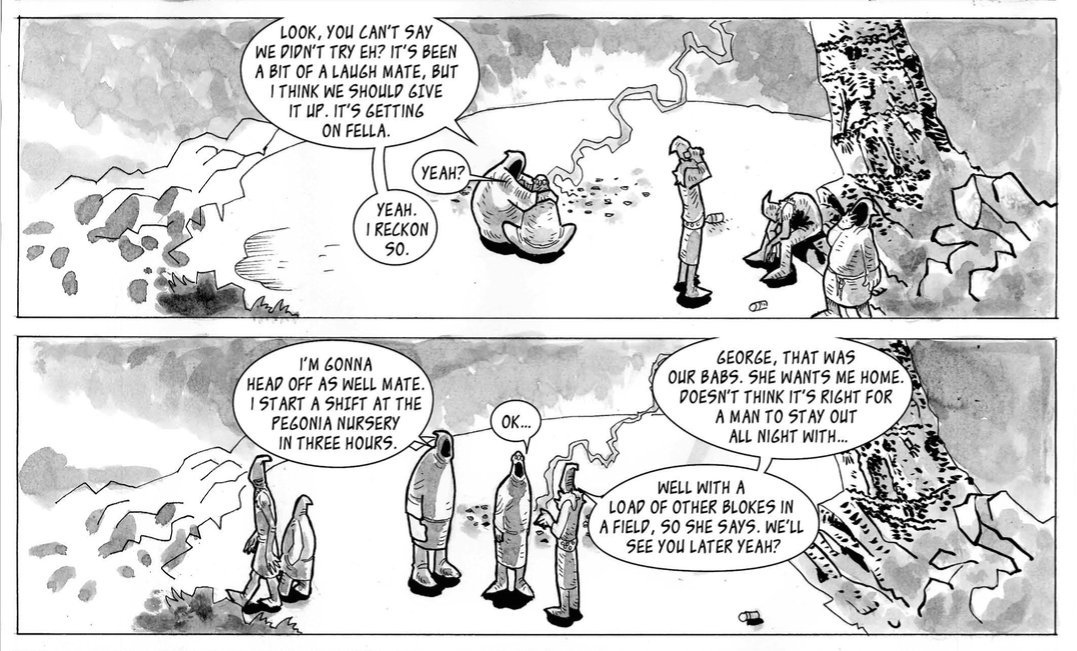 ‘Profits of Doom’ Papercuts and Inkstains #1