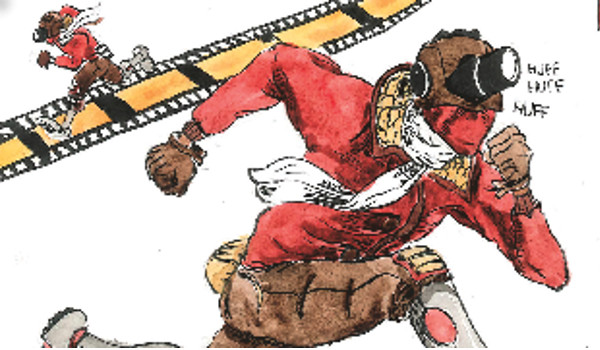 Post-modernist pioneer and occasional lavatory attendant Marcel Duchamp once stated, “Art is wherever I choose to look”; words which kept coming back to me as I read Camera-Man:Take 01, a highly enjoyable new comic by artist/writer Jack Devereaux.

The eponymous hero, Camera-Man, is made distinctive by the fact that he is both hero and observer. While not entirely a new trope (Deadpool’s continuous pop-culture narrative does something similar) Devereaux’s creation takes the idea of the disengaged, marginal protagonist to a whole new level as he and his team-up partner, Boom-Box, fight crime on the mean streets of “Fume City”.

Camera-Man is not your typical wholesome WASP super-dude. His costume consists of a grubby set of leathers and a cowl with a single camera-lens eye, which gives him the look of a hipster cyclops. His power is the ability to “digitise” and enter the CCTV system of Fume City to travel wherever he wants. And that’s about it. In his own words he can “watch” but is “pretty useless on the streets”. He can’t fight, prefering to dazzle wrongdoers with his flash setting. His first encounter with the villainous “Cassette Head Crew” involves him tripping over, getting hit in the face and being saved by a teenage girl. In other words (unless you happen to be a billionaire playboy in peak physical condition and holding an arsenal of gadgets with which to fight crime) he’s basically you or me.

Camera-Man smokes, eats takeout dinners and lives in a bedsit. When not navigating thought cyber-space, he uses his landlord’s telephone to save money. Moreover he is lonely. A trip to the corner shop affords an opportunity to talk to the girl behind the counter or, even more pathetically, her dad. He wonders if they could be called “his friends”. This reversal of heroic norms is what makes the character such fun to read. Neither boy’s own wish-fulfillment or antihero, Camera-Man occupies that negative, protean space the rest of us live in. In the real world, as in Fume City, who we are is more often than not defined by what we’re doing and with whom. I completely identified.

And Devereaux’s artwork matches the tone of his storytelling perfectly. Circuit boards, high-tech gadgetry, even Camera-Man’s programming code inspired speech bubbles are painstakingly hand-drawn rather than cut and pasted. Far from undermining the tech-focused storyline, this deliberately wibbly-wobbly draftsmanship conveys a real sense of the emotional fragility of our hero. The more complex the the technological landscape of Camera-Man’s world gets, the more intense Devereaux’ s pencilling becomes. Thus the technological remains in a constant, fascinating dialogue with the human.

In fact, if one were as pretentious as moi, the artwork would no doubt remind one of the French concept of jolie-laide or beautiful-ugly. Nowhere is this more apparent than in the fabulous character of “Boom-Box”, a spunky female crime-fighter with the powers of late 70s alien technology. Her refreshingly crooked, asymmetric features inspire empathy in the reader and are a nice counterpoint to Camera-Man’s permanently hidden eyes. Will they form a super-team? Is there romance in the (fume-laden) air? Whatever happens, identifying with a character is the first step to caring, and I found myself at turns both amused and pleased by Boom-Box’s ambivalence towards her own powers and her alien lineage. After all, who listens to their mother’s backstory…even if she is from space?

Again the emphasis is always on the subjective, lived moment rather than the objective realities of Devereaux’s world. According to Camera-Man, Fume City was built upon the heads of colossi to raise it above the smog – a fantastical, surrealist premise – yet his existence is governed largely by ennui. He turns to crime-fighting through sheer boredom rather than civic duty; an idea I found refreshing and real compared with the usual murder of a father/mother/uncle/pet gerbil backstory. He has weird powers, Boom-Box has weird powers, yet what they can do is less important than how they are feeling at any given moment.

All in all, Camera-Man represents an impressive first outing for Jack Devereux as both artist and writer – conceptually interesting, beautifully drawn and satisfyingly rough around the edges in the way a cool indie comic book should be. My hope is that “Take 02” will follow soon and that, when it does, Devereaux will continue to be as gloriously immediate and left-of-field in his examination of modern city life as he is now.

Have you read this snappy title? Let us know in the comments section or on Twitter! Find Jack Devereaux’s work at instagram.com/clouddevereaux, devereaux-doodles.tumblr.com and on Twitter @Deverfro