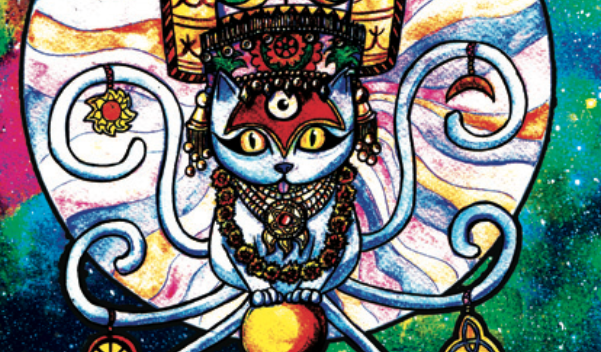 Kitty Jenkins is one of my favourite comics creations: he’s a wannabe sage, a mystical cat prophet who swans from one story to another screwing up lives across all of time and space. When creator Daniel de Sosa made it clear he planned not just a new Jenkins book, but an actual graphic novel, I felt a little trepidation. After all, Kitty Jenkins is by his nature a one-joke cat, a sketch comedy character whose appeal is partially in the variety of settings he can be applied to. How would he hold together a book-length narrative?

De Sosa’s response to this is issue is to present a kaleidoscopic parody of religious and fantasy fiction, mixing elements of Dune, Moebius, Gaiman and copious Eastern religious symbolism. Purrvana finds Jenkins in the middle of a cosmic dance of life, where he imbues countless worlds with intelligent, sentient beings. And then, of course, he returns to screw it all up millenia later. At its heart, Purrvana isn’t a plot driven graphic novel: it’s still a collection of short stories starring your favourite cat and least favourite prophet, strung together on a loose framework of cyclical transcendence and religious adherence. But here, de Sosa begins to present a case for Jenkins finding a permanent home: this collection is themed, following philosophical and religious themes previously discussed in Fuck You! Kitty Jenkins (sort of- his cosmic butthole returns in a triumphant cameo). In displaying Jenkins against a backdrop of fervent religious belief, grand schemes which span light years and consume thousands of years of history, de Sosa is just raising the stakes on the main joke behind the character: he’s a dick who doesn’t care about the outcome of his gags, whether it’s picking on a little boy in a gig audience or creating and abandoning intelligent life for millenia. And I wouldn’t have it any other way.

The other major treat here is the artwork in the book, which is sublime. Influenced by Moebius, and containing references to all sorts of religious iconography (I caught lotus blossoms, mandalas, Jainist hands and illuminated orthodox icons in there), de Sosa’s intricate pencilwork is incredibly finely detailed. Each image presents a vast variety of sights to take in, and for the scholar of Eastern mysticism or cat butts, this is a delight. These carnivalesque images are brought to life by intensely saturated ink washes, drawing the eye through an unearthly palette to match the high fantasy of the story. A typical frame sees a young woman on a giant mouse crossing a vast savanna punctuated by votive statues of Jenkins, washed in greens and purples – it’s heady stuff, and serves to underline the central joke of the book without overwhelming it. This is a book that deserves to be owned in print.

Armed with a one-note sketch character, de Sosa has expanded the Kitty Jenkins mileu into vast landscapes, labyrinthine temples and epic themes without reducing the simple humour of a cat farting out enlightenment. In doing so, Purrvana successfully provides a blueprint for future large-scale Jenkins adventures, and does so with great style, considering its vast ambition, unique vision and technical aptitude.

Have you read Purrvana? What did you make of it? Let us know in the comments section below or send us a Tweet!