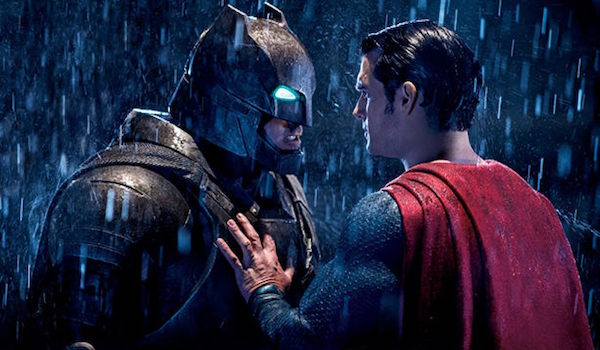 The dynamic between Batman and Superman has been explored to the greatest depths over the course of their near-century long existences. The range of their various encounters crosses the spectrum with one end being their World’s Finest team-up, to the other end as opponents at battle – depicted perfectly in Frank Miller‘s “The Dark Knight Returns.” We may be seeing the full scope of this history in Batman v Superman: Dawn of Justice which is heavily implied by the title and subtitle, and also exposed by the possible spoiler-filled trailers. The yin and yang of their relationship makes the deciphering of their comparisons and contrasts so enthralling as they do represent two sides of justice. The necessity for loyalty and conflict which exists between Batman and Superman is much like the relationship between Batman and The Joker. The differences that create friction, resulting in violent conundrums, showcase the strengths and weaknesses of Batman and Superman. While Joker is a black mirror to Batman’s soul, Superman exemplifies Batman’s strong heroism which can never fully come out of the shadows.

As can be seen in the trailers and TV spots for Batman v Superman, we are getting a much different take on Batman than has been previously exposed on screen. In the final trailer, we see a scene of Batman taking down thugs in a wrestling beat-down style that should keep you in the hospital for months. For many, this is an authentic Batman that shows experience, with high skill embedded in his brawn. Zack Snyder has openly stated that this Batman is heavily influenced by Miller’s classic, which suggests a meaner, colder Batman who pushes the boundaries and consumes the darkness he spits out onto enemies. This Batman has been hardened by, “the bad history with…freaks dressed like clowns.” While it appears that Batman’s motive for confronting Superman stems from the fact that Superman’s mere presence on Earth has lead to countless casualties, I’m sure the clash of ideologies will reveal how they represent different facets of justice. If Superman stands for Truth, Justice & The American Way, then Batman’s vigilante quest will undoubtedly raise the same caution as his stance on Superman’s inability to prevent innocent deaths.

But as we all know, Batman and Superman become friends and are both a part of the Justice League. That doesn’t mean their individual approaches to defeating evil change. Their differences are apparent, but they both strive to save the day which calls on both of them to hone in on their strengths to achieve that victory. Even when there’s a constant disagreement, Batman and Superman rely on each other’s determination for good to overcome their oppositions. Much so, Batman and Joker’s constant battle never wavers as Joker points out they need each other, and will continue to as long as they live. Batman cannot kill Joker, while Joker would have no fun without Batman. This is displayed perfectly in J. M. DeMatteis‘ “Going Sane” when The Joker attempts to live a life of normalcy upon discovering Batman is presumed dead. Without Batman, Joker has no opponent to stand against his wave of crime, just as Batman has no mission without a Joker to conjure up havoc.

While it is heavily rumored that Batman will appear in Suicide Squad, we have yet to confirm whether the Ben Affleck Batman and Jared Leto Joker will officially square off. Though we can easily assume in this universe they’ve had more than a few fights. After all, I don’t think the Joker’s grillz are just a fashion statement. The Joker has helped shape Batman into the emblem of fear which helped fuel his desire to don the cape and cowl in the first place. But if Joker lures Batman further and further into the dark, Superman helps to bring him closer to the light.

Are you excited to see the DCU Batman, Superman and Joker? Will this Batman and this Joker actually face one another? Let us know in the comments or on Twitter!