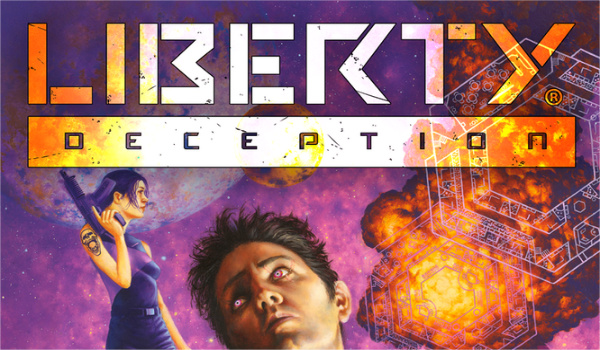 Greetings friends and welcome to another independent, creator-owned comic book review! Today we will be taking a look at Travis Vengroff‘s Liberty: Deception #0, a lead-in to Liberty: Deception, Volume 1, which will be released in October later this year. Liberty: Deception is published by John Dossinger Publishing, and features a script by Vengroff, art by Casey Bailey, and lettering by Eduardo Camacho. We’ll talk a bit more about the upcoming Liberty Deception, Volume 1 in just a bit, but for now let’s get this prequel issue open and check it out!

Liberty: Deception #0 is relatively short even for a comic book, and comes in at just twelve pages. For a prequel issue this works just fine in my opinion, and despite the short length we still get a good look at the world that Vengroff is trying to build. After an initial botched attempt at harvesting resources from a newly discovered solar system, communications with the “alpha colony” were cut off mysteriously, leaving the colony to their own devices. Hundreds of years pass and wouldn’t you know it? After generations of bickering and conflicts forged, the newly formed society has begun to live in harmony with one another! Just kidding, tee-hee. Rival gangs, slavers and psychopaths pad the landscape of “The Fringe,” a wasteland not unlike something you might see in Mad Max, while Archon Reeve and his military regime rule over the utopian city of Atrius. Of course this leads to all sorts of conflicts between the wasters and the elite, and you can be sure that in The Fringe all manner of sick, twisted, and depraved activities take place with each new day; including cannibalism! Yum!

In this prequel issue of Liberty: Deception we meet the Conways; Claw, Gust, Liv, and Will. The Conways are hard drinkin’, card playin’ weapons dealers who are on their last dime, and they will do just about anything for food. See, in The Fringe there exist “water and meal tokens” that seem to be a hot commodity since, you know, people cannot live without food or water. I wonder if Archon Reeve has anything to do with this wonderful little system? Despite not learning much about Reeve in this issue of Liberty: Deception, I get the feeling he’s not really the nicest guy.

Claw hatches a plan to sell some weapons to the Prox gang, a smaller gang that he believes will pay handsomely for a cache of new arms. At first everything seems to be going well until the Prox gang leader begins his own brand of “negotiation” with Claw, which includes simply taking the weapons and not paying the Conways a single red cent! Ehem, or whatever kind of currency is used in The Fringe. Luckily the rest of the Conways have been waiting in the wings the entire time and open fire on the Prox gang, which leads to some seriously spectacular violence! Oh yes, this is what I love about independent, creator owned comics! 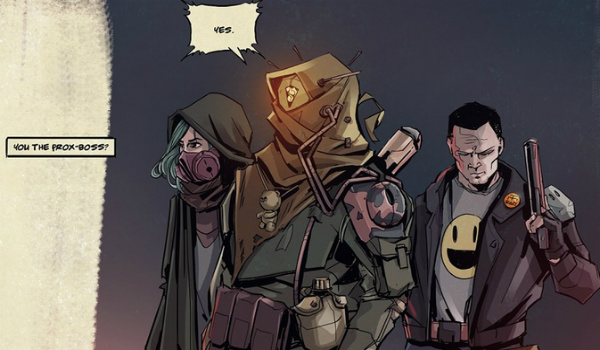 Brains are blown out of the backs of heads, faces are bitten off (not even kidding), and swords go through flesh and bone like a knife through hot butter! Looks like the Conways will live to sell weapons another day, and they found some free tokens too! The very last moment of this issue suggests that the Conways plan to take the bodies of the Prox gang home with them and make Jerky…with the bodies…yeah…so, who’s hungry?

Vengroff’s script is fantastic and he does an excellent job of giving the Conways their own little vernacular, which really helps to put you right in the story; it isn’t overbearing and it gives a nice sense of authenticity to the characters. In the end, it’s a little unnerving that one might actually root for the Conways considering their dietary habits, but I was glad they won the day nonetheless. That can be tricky to do and Vengroff nailed it down with ease in Liberty: Deception #0.

Bailey’s artwork in this prequel issue is absolutely amazing. I cannot think of any other way to describe it; this guy knows what he’s doing. The cover artwork is incredibly impressive, and I was pleased to see that the quality of Bailey’s work was consistent throughout the interiors of Liberty: Deception #0 as well. In all honesty I found it somewhat reminiscent of Fiona Staples‘s work in the incredible Saga, and I would be inclined to say that this is quite an achievement. Have a look for yourself: 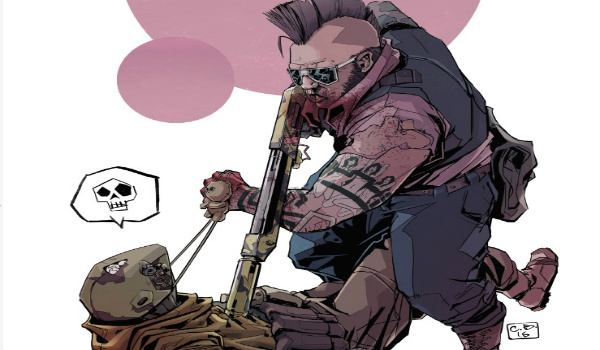 According to a short blurb in last page of this issue, we will be delving into the city of Atrius in Liberty: Deception, Volume 1, which I am very excited to see. In this short, twelve page prequel there was so much to like that I can’t imagine just what Vengroff has planned for a lengthy release. Bring it on!

For more information about Liberty: Deception visit the official website here, where you can purchase issue #0 as well as a neat looking book called the Fringe Iconography Guide. Then, take a little stroll over to their Kickstarter and help support the upcoming Liberty: Deception, Volume 1! There are all sorts of premiums depending on the donation, including a variant cover by Don Dorman. Well, what are you waiting for? Go do it!

Will you be checking out Liberty: Deception? Voice your comments, questions and concerns in the comments section below or on our Twitter page!