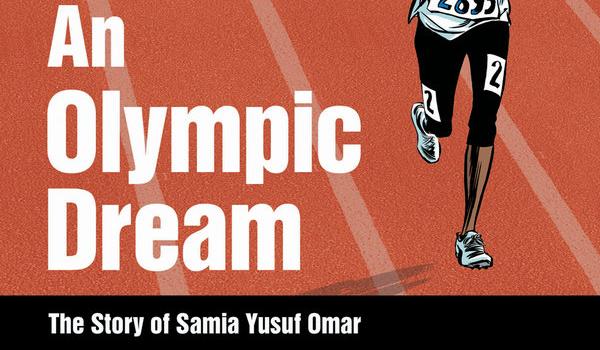 I don’t pretend to be an expert on the recent surge in refugees escaping their war-torn homes and seeking shelter on European countries, but Reinhard Kleist‘s An Olympic Dream is an eye-opener into the effects these refugee crisis’ have on the individual. The countries in which refugees escape to are, mostly, only able to gaze at the crisis through the media, brief yet headline snaps on our TV screens, in our newspapers, on our Twitter feeds, before scrolling on to the next bit of news.

We’re aware of the crisis for sure, but viewing the crisis in such a way as the above creates a distorted image, one that lumps weeks, months, perhaps years of terror into a single news bulletin which we digest quickly before devouring the following headline. An Olympic Dream does much to tune our distorted image into something clearer and more direct than any news item can deliver, made all the more effective by the fact that this is a biography, not a work of fiction.

An Olympic Dream tells the story of Samia Yusuf Omar, an Olympic runner who competed in the 2008 Beijing Olympics. The novel follows her journey as she travels to Europe in the hope of training to become the best runner she can possibly be. However, her journey is one shared with many other refugees escaping their toxic homes for better lives, or at least different ones. Omar must trek across unforgiving deserts, thieves, and human traffickers, all to escape her politically dangerous home.

Samia made headline news in 2012, not for eventually competing in Europe, but for drowning on her journey to the continent itself. Such a sadly doomed fate gives An Olympic Dream a sour after-taste once you’ve read it, but it also makes the book all the more compelling to read.

Even if you’re not familiar with Samia’s story, it’s readily apparent that Kliest has translated her story with a sensitive immediacy in his artwork and his structure. The artwork, all in black and white, is both sharp and rich, economical in detail and forthright with the emotions the characters exude. There are several lengthily passages where dialogue is all but gone, allowing Samia’s story to be shown and not told in an understated yet powerful manner. We see her intimated, abandoned, threatened. Everything that could possibly go wrong in her journey to Europe does, but Samia’s resilience in the face of such dangers lends a warm atmosphere to the proceedings.

Have you read An Olympic Dream? What do you make of it? Let us know in the comments section below or send us a Tweet!