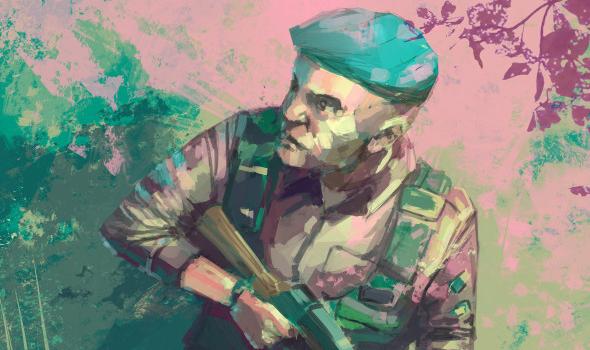 River God presents as a mixture of thriller, science fiction and horror. It opens with the discovery of two dead bodies, seemingly falling victim to a raging river. What soon becomes apparent however, is that the local authorities are aware that there may be more going on with the mention of other missing people and the evident prevalence of organ trafficking in the area.

Set against the backdrop of the African countryside the police have enough on their plate with attempting to stop local poachers, without having to investigate something that they don’t understand, or don’t want to understand. What we come to discover is something much more sinister than simple drug trafficking. Something much darker, and more difficult to define lurking below the surface.

Throughout the first issue, and part of the second, Willmott’s writing offers the reader hints and snippets of information to whet our appetite that keep us hungry for more, though at times the lack of answers does result in some confusion between story lines and characters. This is exacerbated by the lack of use of character names and the lack of obvious distinguishable features between a lot of the characters. That said, towards the end of the second issue answers are given, just enough that the reader begins to piece together a puzzle but still has pieces missing, leaving a desire to read the third and final installment and gain the whole picture.

Whilst the artwork is impressive, and through its simplicity offers a stronger focus on story and dialogue, this simplicity does make it difficult to differentiate between characters. This aside, the images are atmospheric with a strong use of overall colouring to help identify locations. The images used on the covers are little short of beautiful and draw potential readers in immediately.

River God is an intriguing and original comic that tells its story through layered narrative and simplistic yet effective artwork. Whilst identification issues plague the story and at times makes it difficult to follow, along with holes in the story, these are for the main part dealt with by the end of issue 2 and the reader is left with a desire to answer the remaining questions, which hopefully come full circle in issue 3.

Find out more about the comic, where to purchase it and the Kickstarter campaign here

Have you contributed to River God‘s Kickstarter yet? Let us know in the comments section below or send us a Tweet!