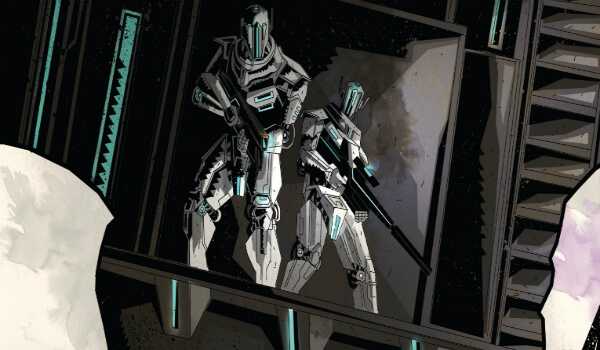 #1 of Fractal literally starts with a bang, with a bus crash at an airport, that may or may not have been deliberate, leaving a ton of people dead. We then cut forward some time later, with protagonist Bryce, a survivor of the incident, at work in his boring, routine office job in a kind of dystopian future that he sincerely wishes he wasn’t living in. “If only there were some sort of computer that could fix this mess we call society”, he laments to himself.

To be honest, my main gripe with this issue was that I felt that it didn’t give a clear enough overview of what exactly had happened to the world in which it takes place. Sure, we can tell that it’s dystopian, and that the people are being oppressed, and that violence is clearly the norm, but little explanation is offered as to why or how it came to be this way. I guess that’s something that will be explored more as the series progresses, but still, I would have preferred the opportunity to have familiarised myself with the world from the get-go.

Anyway, Bryce is not content to become a “cog in the machine”, as he calls it, so he sets out to try and make a difference by acting as a covert agent, and almost getting himself killed in the process. I wasn’t too sure about the exact nature of the mission that he was trying to pull off here, other than that it was something to do with tracking someone in possession of mysterious piece of technology that could somehow be linked to the discovers of pocket dimensions. Overall I found the plot of this issue to be a little bit to vague, but I’m hopeful that it will be fleshed out more in future issues. Bryce himself is also a very interesting character who has clearly been through a lot of trauma in his life (including the crash t the beginning), so I would definitely like to learn more about him and his backstroy as the series develops.

But what #1 lacks in plot, it more than makes up for with its stunning artwork. From its gorgeous watercolour style cover, to its use of dull grey and brown to depict a grim and gritty futuristic urban city, this is indeed one very pretty issue. No, there weren’t a whole lot of colours on display in the book, with the aforementioned brown and grey making up the majority of the visual content, but rather than make it seem less interesting to look at, the dark (both figuratively and metaphorically) look really suited the kind of story that writer and illustrator Daejuan Jacobs was going for here. This issue certainly soars high in the visual department.

Although I found it to be somewhat lacking in plot and character development, #1 of Fractal still managed to draw me in and make me want to learn more about the strange and mysterious new world where nothing is ever as it seems. Combine that with the great artwork, and this is definitely a series that has strong potential.

Have you read Fractal? What did you make of it? Let us know in the comments section below or send us a Tweet!