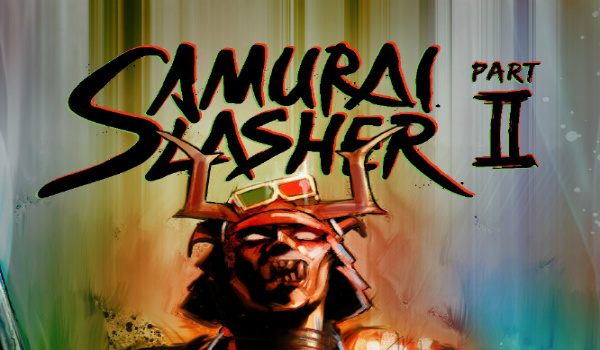 Every once in a while a comic book comes along that is both shocking and endlessly entertaining, perfectly executed yet so bizarre, and that stands as a triumph of the sequential art medium. Samurai Slasher is one of those comics. Yes friends, Samurai Slasher is the kind of independent, creator owned comic that I just love to get my hands on. Full of violence, language, loud rock music, drug use and hookers, Samurai Slasher is absolutely not for children so please take care when reading this review. Let us begin.

Samurai Slasher Part II is the appropriately titled sequel book to Samurai Slasher, which we previously reviewed. Like its predecessor, Part II is made up of several short stories that feature either the blood-thirsty Samurai himself, or someone that is possessed by one of his missing artifacts. This time around creator Mike Garley and his team of artists managed to throw in a 3D version of one of the stories, and there I was unable to find my 3D glasses (sigh), but that’s really just my own problem now, isn’t it?

Rather than looking at each of the nine stories separately, we’re going to go through this massive, nearly 100 page anthology and pick out some of the parts that I found to be the best, starting with a delightful little story called “Hookers, Cocaine, and the Samurai Slasher.” 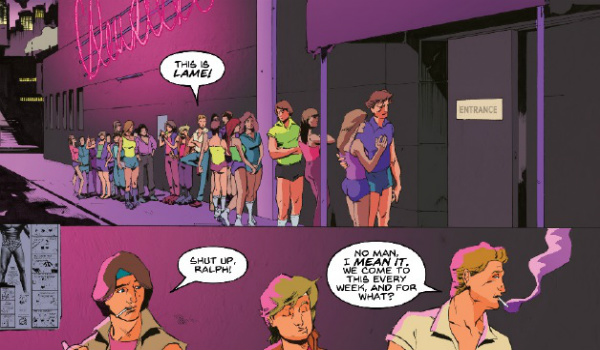 No, you didn’t read that wrong. This story actually contains all of the things mentioned in the title, and it’s absolutely glorious. Inker Cian Tormey and colorist David B. Cooper manage to capture the feel of 1980s Miami with aplomb in “Hookers, Cocaine, and the Samurai Slasher” (man I love that title), complete with a roller skating rink. And I don’t mean those newfangled “rollerblades” either.

Since the Samurai Slasher’s initial defeat, his body was dismembered in order to keep him at bay, but that didn’t stop his armor from imbuing its unsuspecting wearers with incredible strength and a blood lust to match. In every story there is sweet, sweet violence and carnage and many characters are killed in often hilarious ways! During the course of the book hearts are ripped out, jaws torn off, bodies set ablaze, and there is even a comedic domino-effect style “accident” at Stonehenge that results in the deaths of a bunch of cultists. Take that!

Did I mention I love this comic yet? Because it certainly bears repeating, and I probably won’t stop saying it to myself as I sit here for some time. In another amazing moment in Samurai Slasher Part II, we’re treated to a support group meeting in “The Samurai Slasher vs. Sole Survivors.” In this story we meet a bunch of lucky survivors of the Samurai’s wrath, who have taken it upon themselves to hold meetings to help each another cope with the horror. Not for long though, as the Samurai shows up one day and permanently adjourns the meeting! …You know, by killing them all…ehem. Garley pulls no punches in his writing; no one is safe, and I absolutely love that.

Samurai Slasher doesn’t take itself too seriously, if at all, which is one of its greatest strengths. I always found that brutal violence blends well with comedy, and that the two somehow enhance one another’s effects when placed side by side. While all the stories are generally hilarious in Part II I found “Meeting the Samurai Slasher” to be the funniest, but that might be because it ticked some nostalgia boxes for me.

In “Meeting the Samurai Slasher” we meet a ridiculously jacked-up army soldier who has an unexpected meeting with the Samurai. This leads to a very “Mike Haggar from the Final Fight video game moment” when the soldier rips his clothes off and reveals himself to be a very well trained fighter. Interestingly, the soldier also bears some resemblance to Guile from the Street Fighter series of fighting games, and even does the obligatory “final form” schpeel that many video game players should be more or less familiar with by now. Too bad he ends up being impaled on a flag pole by the Samurai. Oh, and a television set is also smashed over his head to comedic effect.

There are a couple more “versus” features in Part II that also include the Samurai taking on a Stonehenge cult and the “Army-Robo-Samurai™”; the latter of which has a connection to a story from Part I. To put it bluntly, Samurai Slasher Part II is packed with more content than you can shake a katana at! Admit it, that joke was pretty clever.

The creative team behind Samurai Slasher Part II is as large as it is incredible. No less than fifteen different artists are featured in the book’s pages, and everyone does an exceedingly fantastic job. Garley writes each story, while Mike Stock handles all the lettering. This is one of those comics that really is a team effort and if you haven’t had the chance to check out either book you really, really should. 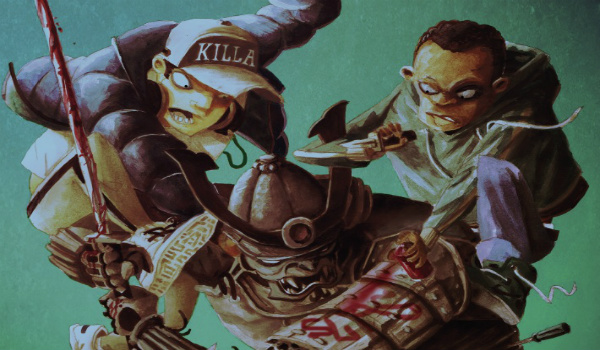 This picture is just one of the many extras included in the book.

Lastly, Samurai Slasher Part II includes a lengthy appendix that features concept art, posters, and all kinds of other fun stuff. This little extras section even has its own title: “The Samurai vs. The Additional Material.” How appropriate.

For more information about Samurai Slasher check out Mike Garley’s official website here, and then use your expert typing skills to dial in the address to the Kickstarter page so you can support this amazing book! Or, you could just click this handy little link I have provided; it all depends on how difficult you like your internet surfing experience to be.

What do you think of Samurai Slasher? Is it all its “slashed” up to be? Let us know in the comments section and on our Twitter page!