Home » Who Is Doc Savage? 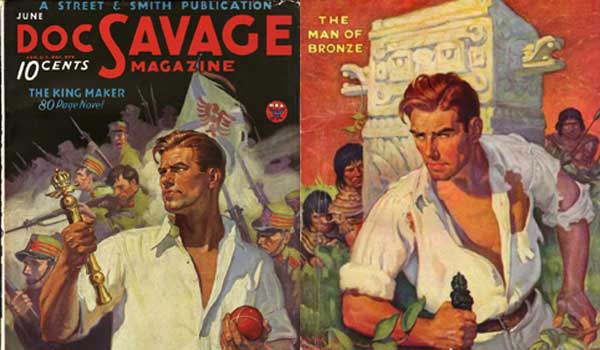 It would be interesting to know exactly how many people watching comic book films today realise the debt of gratitude that is owed to a largely forgotten pulp fiction character from the 1930s?  A character that is unique in the history of the medium in that he has appeared in comics from both Marvel and DC. A character and his team of loyal fighters for justice, who Stan Lee has credited as being the forerunner to superhero teams throughout comic history and without whom there would have been no Superman or Avengers or Fantastic Four. The Man of Steel owes everything to the Man of Bronze.

Doc Savage, Man of Bronze, was created by publisher Henry W. Ralston and editor John L. Nanovic at Street and Smith Publications, with additional material contributed by the series’ main writer, Lester Dent. He first appeared in March 1933. Clark Savage Jr was raised by his scientist father (murdered in the first novel) to become almost a perfect human being in terms of strength, mentality, and physicality. He even had an Arctic Fortress of Solitude to escape to, in order to think through the solution to defeating evil. Whilst having no superpowers, Doc Savage and his team of friends, who fought together in WW1, went on to fight evil wherever it existed. Before Bruce Wayne built the batcave beneath Wayne Manor, Doc Savage, living on the proceeds of a gold mine, had his base on the 86th floor of a New York skyscraper, with a fleet of cars, boats, and planes at a secret hangar on the Hudson River. Like the Dark Knight, the Man of Bronze using a wealth of gadgets in his battle against evil. Through pulp novels, radio plays, comics, and even in one film (George Pal‘s poorly received 1975 outing which became low budget and camp when the studio cut its budget at the eleventh hour, leaving only a guilty pleasure for fans of the character), Doc Savage has maintained a loyal, if small, following.

The Doc Savage Magazine ran from 1933 to 1949, but it was the reprints from 1964 that enabled the character to gain a new following. Doc Savage: scientist, adventurer, martial artist, detective, master of disguise. He owed more to his pulp origins than to the world of the comic book heroes like Superman or Batman. But in 1941, after having appeared in The Shadow comic, Doc Savage became a superhero, getting his own comic, becoming almost indestructible having survived a plane crash in Tibet and discovering a gemstone of special powers. By 1948, Doc Savage in comics would be gone, not reappearing until a one off appearance in 1966. But, in 1972 Marvel Comics resurrected the character, who would appear in various forms and for various publishers ever since. Doc worked with a team of experts, The Fabulous Five: Lieutenant Colonel Andrew Blodgett “Monk” Mayfair, an industrial chemist; Brigadier General Theodore Marley “Ham” Brooks, an attorney; Colonel John “Renny” Renwick, a construction engineer; Major Thomas J. “Long Tom” Roberts, an electrical engineer; and William Harper “Johnny” Littlejohn, an archaeologist and geologist. The Fabulous Five would prove to be the blueprint for crime fighting superhero groups to come.

The word is that Iron Man 3 director/writer Shane Black is to shoot a new Doc Savage film starring Dwayne “The Rock” Johnson. Black has a history of adopting a post-modern approach to his work. Doc Savage may need more of the seriousness of The Dark Knight and less of the Iron Man 3 quirkiness if he is survive a second attempt at the big screen. Of the first outing, speaking in 2013, star Ron Ely said: “It was sad it didn’t work. The studio sold it down the river. The hierarchy changed, the budget got taken away. We were a nice, cohesive unit but weren’t given the tools to do the job.” Whatever happens with the reboot, if it happens, the Man of Bronze is deserving of respect for the influence he has had upon our favourite superheroes. Doc Savage lives on through the reprints of the novels, as well as the comics, but perhaps it’s because he seems a product of another age, along with characters such as The Shadow, The Phantom, and The Rocketeer, that has prevented Doc Savage gaining the wider respect that he deserves as a character? Doc Savage’s oath was:

“Let me strive every moment of my life to make myself better and better, to the best of my ability, that all may profit by it. Let me think of the right and lend all my assistance to those who need it, with no regard for anything but justice. Let me take what comes with a smile, without loss of courage. Let me be considerate of my country, of my fellow citizens and my associates in everything I say and do. Let me do right to all, and wrong no man.”

Not a bad way of thinking.