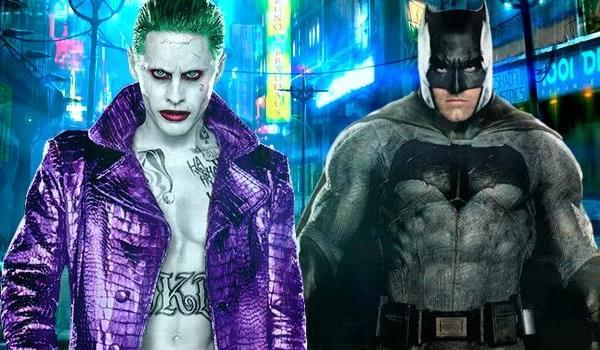 It would be an understatement to underplay the division that Batman V Superman created upon its release and to this subsequent day amongst DC fans and general connoisseurs of the superhero sub-genre. This was made worse still by the various announcements and rumours that proceeded the film’s release. How one perceived and accepted these announcements largely depended upon what side of the divide you found yourself on, whether you loved the film or hated it. Personally, I absolutely adored the film, so when news such as Charles Roven‘s minimised involvement in the producing of future DCEU projects not yet filmed emerged or Jeremy Irons comments to the Daily Mail on the film being “Overstuffed” surfaced, I frankly felt rather disappointed.

The proverbial really hit the fan-boy when it was announced that Suicide Squad was undergoing reshoots due to fears on Warner Brother’s behalf that it needed more humour, the studio supposedly scared that Batman V Superman had proved too glum for audiences familiar with Marvel’s more comedic tone. This proved to be wholly untrue resulting in the director of Suicide Squad David Ayer, stepping into the fray and denouncing the claims. To summarise, Ayer established that films today often undergo reshoots and that he had been offered more money to include various other set pieces and additional footage, largely due to Warner Brothers adoration for the film and lets be honest, who wouldn’t take more money from a studio? I mean not only is Suicide Squad the most anticipated movie on Twitter of 2016, early screenings of the film have yielded a showering of praise from test audiences.

So here’s where I wade in as both a DC super fan and as an advocate of Batman V Superman attaining the masterpiece status I think it is truly deserving of. Whether you’re worried about the DCEU or not, I believe its popularity and ability to thrive ultimately rest upon a singular facet, one tick box which will determine whether it is likely to succeed or not and that’s the cannon. If in doubt, stick to the source material and no more is this going to be evident than via the one aspect I believe will be scrutinised the most: the interaction and relationship between Batman and the Joker.

I’m going to nail my colours to the mast now and decree that Batman and the Joker are not only the two biggest hitters in the DCEU’s comic roster but are also onscreen, hell they’re the biggest protagonist/ antagonist relationship in Superhero movies stat. Comparisons have already been made with regards to Leto’s portrayal of the Clown Prince of Crime with that of Jack Nicholson and Heath Ledger, which is inevitable. I can only hope that the haters fall by the wayside as they did with Affleck, his portrayal of Batman proving to be one of the unanimous positives to come out of Batman V Superman. So what can we hope to see from these two juggernauts? What source material will be revealed to us old or new? Here are the six classic Batman/Joker moments I hope will feature in the DCEU in its forthcoming features:

6. A Visit to Arkham 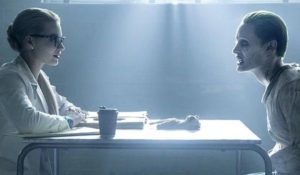 Now as the picture above indicates as well as a plethora of other set photos posted on Ayer’s Twitter feed, we are returning to Arkham and one can only hope it is under the circumstances of the Paul Dini and Bruce Timm one shot, “Mad Love” (More on this later). That said, what I would really love to see is one of the many face to face conversations we have come to love both in the comics and Animated series between Batman and the Joker often from the confines of the Joker’s Arkham cell.

These moments have yielded some truly memorable moments over the years and often contextualise the disjointed relationship between the two, often projected via Batman’s dilemma at having to constantly imprison and recapture the Joker, whilst the Joker desires the attention the cat and mouse nature of their relationship provides. We have seen live-action moments like this to an extent, for instance the GCPD interrogation scene in The Dark Knight, however to date, I believe Arkham has not be captured on film to the degree that fans crave e.g. the depictions of Joel Schumacher and Christopher Nolan.

5. Will Batman Break his One Rule? 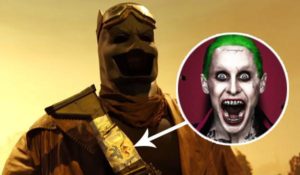 If like me you spotted this Easter Egg during the viewing of the film, you’ll have no doubt been nudged off the edge of your seat that little bit further, a spectrum of questions piqued. Is the card used as a trophy, a reminder of Batman’s previous exploits like those he houses in the Batcave or alternatively, does it serve as an indication that Batman, pre Knightmare incarnation, has killed the Joker? The mouth salivates at either explanation.

The Joker has and always will be the biggest test of Batman’s moral code and although this goes a little awry in Batman V Superman with his death toll, the exploration of a maniac like the Joker being allowed to live yields a treasure trove of potential not to mention if it coincides with Number One on my list. We’ve seen Batman kill the Joker before in Tim Burton‘s Batman as well as save him for that matter in The Dark Knight; which will the DCEU decide to opt for? 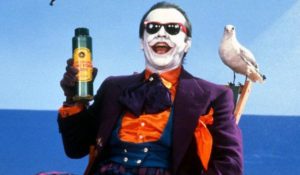 A must have. Laughing gas or Joker gas renders its victims horrifically disfigured, a macabre grin left after the victim literally laughs themselves to death. A calling card often left for Batman to find, this is the ultimate weapon when it comes to expressing both Joker’s insanity and his complete lack of humanity. Whether in a standalone film where the residents of Gotham are plagued by the gas, Batman needing to find a cure or just a creative way for Leto’s character to dispatch his victims, it would serve as a return to a fan favourite not seen since Batman (1989). 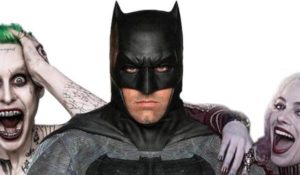 As mentioned earlier with regards to the “Mad Love” story, an investigation into Harley’s besotted state with the Joker, regardless of his abusive nature is paramount in creating a dynamic between the two characters. More important however, is Batman’s role in their relationship and the role he fulfils. One of the most endearing qualities of Batman in previous years has been his desire to see justice brought down upon all those who commit awful criminal atrocities such as the Joker and Harley, yet paradoxically, he maintains his desire to save Harley not just from the Joker’s criminality but also from herself. This battle to achieve both justice and retribution simultaneously has always proved an intriguing one. 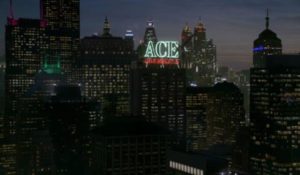 With Ace Chemicals both featuring in the Turkish Airlines promotional campaign for Batman V Superman as well as in the film itself via a brief glimpse during the Doomsday battle, I think it is safe to assume that Ace Chemicals will play a large part in the DCEU. Moreover, we have also seen a leaked picture from the set of the Suicide Squad depicting the infamous chemical plant as well as witnessing the Joker leaping into a vat of chemicals to retrieve Harley Quinn in the Suicide Squad trailer. One can only hope that we are given an origin story unlike that of Burton’s Batman (although marvellous in its own right) and more akin to that of the seminal Batman: The Killing Joke, whereby we are introduced to a down on his luck comedian (never formally named/identified) who is forced to commit a crime at Ace Chemicals dressed as the iconic Red Hood, only to be foiled by Batman.

Despite Batman’s best efforts to rescue him, the man lands into a transformative vat of chemicals and with that, the Joker is born. For me this would serve as a perfect catalyst/ driving force between the two: a man obsessed with the  person present at his creation juxtaposed with that of the crime fighter who is plagued with the guilt of not having saved the man and in failing to do so creating one of his biggest villains.

1. Death in the Family 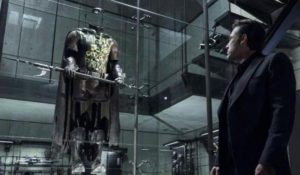 You saw this coming a mile off, right? For the love of God, it has to be the right time now doesn’t it? With it recently being confirmed by Warner Brothers that this is indeed the Robin suit worn by ex- sidekick Jason Todd, we must be on to some crowbar swinging brutality, surely. For this to ultimately work, I believe the DCEU needs to heavily stick to the Under the Red Hood storyline.

The thought of a resurrected Jason Todd holding Bruce Wayne to account for allowing the Joker to live after murdering him, a captive Joker there to witness this heart wrenching moment… well its too good an opportunity to miss. I don’t care how they crowbar it in (pun very much intended), fans have been waiting for this ever since Todd returned in all his badass glory.

So, did this list put a smile on that face of yours or did it leave you laying beaten and bloodied like a metaphorical Jason Todd? Have I left any iconic moments out? I’d love to hear from you in the comments below or as ever, on our Twitter page.