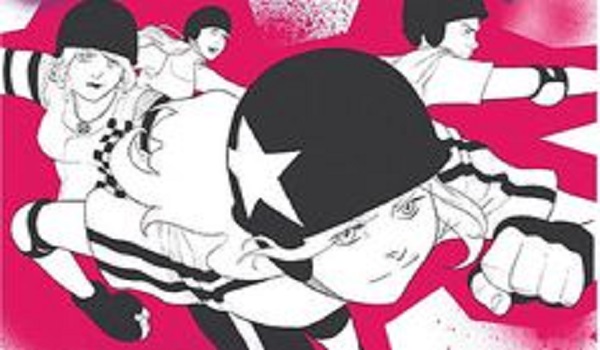 First and foremost, Fast and Frightening is very different from most comic-books out there. This in turn is both its advantage and disadvantage. The central theme of the narrative is roller-derby. Now I am unfamiliar with the sport so a lot of the narrative was lost to me. However, the characters is where the story really shines. Fast and Frightening follows a group of women who want to form their very own roller-derby team and the process of gaining this dream.

The protagonist, Stephanie Brandon, comes from Canada and is adjusting to her new life in Coventry, where she comes across roller-derby and decides to form her own team. This in turn creates the nice little sub-plot of her coming to terms with leaving in the UK and gaining a new life and new friends through her roller-derby team.

The whole narrative itself though isn’t anything particularly new, despite being completely different to the usual comic-book format. The story reminds me of films like Bring It On (sue me, I like the odd chick-flick). It has that kind of set-up and all the chick-flick tropes to go along with it, and the characters can sometimes feel controlled by these traits and feel quite stereotypical, even right down to the sub-plots they are involved in and the type of female characters shown within the panels.

This doesn’t necessarily make them weak characters and all do feel relatable and can be fun to follow. I believe the weakness to this series is your liking of roller-derby. Since the narrative relies heavily on you either knowing the sport, or at least being invested in it, I found it alienated me and made it hard for me to be pulled into the world and events going on in the panels. This is why Fast and Frightening is at a disadvantage for being so different.

The one thing that went through my mind whilst reading this comic-book was audience demographic. Having studied Media at college and later Professional Writing at University I know a thing or two about establishing who your audience are, and above all the market you can sell it to. For me, Fast and Frightening has such a hard task of finding a said market because of the themes and story it wants to tell, made worse by it being portrayed in comic-book form. When I think of comic-books the three main categories that spring to mind are Superhero, Science-Fiction and Manga. A story about roller-derby wouldn’t even cross my mind. Secondly, its genre is chick-flick which again doesn’t really fit into the comic-book culture and I feel there wouldn’t be many people who liked both roller-derby and chick-flick’s and also read comic-books. I feel that this entire story would’ve fit better within another medium, like say film or television.

The other problem I had with Fast and Frightening was the art-style. Story is one thing but the visuals of a comic is just as important, if not more so. It determines how invested and involved you will become with the story through how you interpret the design of the characters and their surroundings. This is why I’m peculiar when it comes to comic-books because if the art-style isn’t to my test then I stray clear of them because I know I won’t feel as immersed. Carlos Pedro‘s art-style felt unfinished, almost as if I was seeing the drafts or early concept art instead of the final product. So it did feel distracting to say the least and lent to my disinterest as the characters looked the same and there was little, to no life and colour within the panels.

Something that started off as a nice idea was the inclusion of music. It was established very earlier on that there was background music going on within certain scenes, shown through caption boxes. But this became very overused throughout the three issues with every other page introducing a new song, and so it lost its unique feeling and thus become an annoying tool for effect, rather than a unique element. Plus it is hard to get immersed through music if you don’t know the songs.

What Fast and Frightening does well at though is ‘character’. When the narrative focused on these women interacting with one another I did feel invested because you could connect with them, and from time to time, there interactions were actually amusing and fun. There was a lot of emphasis on the character drama and their struggle and in some ways I wanted them to succeed. But this is where you realise that the whole narrative should have been about these woman’s lives instead of about roller-derby. If anything the roller-derby plot, the whole point of the comic-book, was a distraction from the core storyline: the woman’s friendship. Even the creator, Russell Hillman, admitted in his outro that he became invested in his characters and wants to continue their story outside of the roller-derby storyline.

I believe this entire idea could have been utilised a lot better had the story concentrated on the right plot-threads, i.e. the characters themselves, and been transferred into a different medium as I suggested above. There is potential for Fast and Frightening and I think all it needs is a nudge in the right direction. Feel free to give this story a go and enjoy the positive points that the story thrives at, such as the interesting character dynamics and relationships, which also delves into the diversity of different races and sexualities. Just be warned that if you’re not too familiar with roller-derby, or aren’t fully interested in the chick-flick genre, then you might struggle to connect.

Have you read Fast and Frightening, and if so what did you think about it? Please share you thoughts and opinions in the comment section below or on our Twitter page.