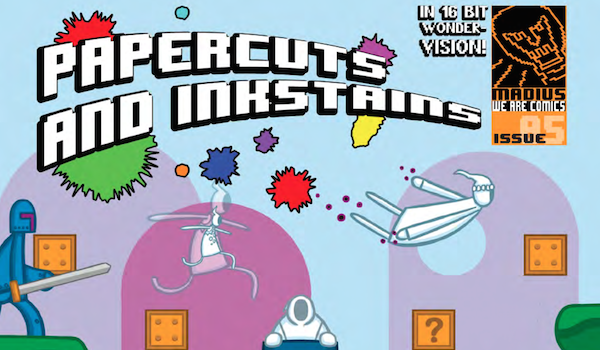 “They’re,” being Madius Comics with the fifth installment of Papercuts and Inkstains.

NOT a bad thing.

It’s a fun homage to some old-school video games that have been overlooked and forgotten with the emergence of the dozen HALO’s and Uncharted’s. With more bright colors than the first four issues had combined, Bob Turner’s cover is a punch-you-in-the-face with nostalgia kind of visual. Seeing new (and familiar) characters in an environment reminiscent of Mario and Co. was a fun reintroduction to the series, and allowed for a seamless start to the first story in the fifth installment.

Also drawn by Turner, “Immersive Gaming Experience,” continues with the throwback vibe of the older video games that is seen with the cover. While the premise of Story #1 focuses on an immersive gaming experience, the comic itself doesn’t require readers to devote too much energy or brainpower to get through it.

It’s succinct, allowing the visuals to tell more story than the written word, and felt a bit like the short cartoons that would play before Warner Bros. older feature films. A bit of mindless entertainment never hurt anyone and, “Immersive Gaming Experience,” is no different. Is it the best story that has ever been told in comic format? No. I wouldn’t even say it’s the best of Papercuts and Inkstains, but it’s fun and self-aware enough to make it an enjoyable way to kill thirty seconds. The self-awareness of the comic, and clever manner in which the title is emphasized, makes it a read that doesn’t feel forced or cumbersome.

The humor lies in the pretty accurate portrayal of today’s gamers. Always eager for the next best thing, the story’s central character finds himself learning the hard way that having the full immersive experience isn’t necessarily something one should seek out when fire is involved.

Like most television Pilots, the first installment of a comic is very rarely my favorite. I was somewhat impartial to the first installment of, “Vampire Wonderland,” seeing its potential but still not entirely sold on the story itself. There were certainly some strengths that I felt could set the story apart from the numerous other vampire tales that we’ve seen recently but, as it was the introductory segment, I was uncertain as to what kind of story, “Vampire Wonderland,” was really trying to tell.

Part 2 has done a great job at picking up the pace and amping up the action. Sabi is still on the run from a hoard of vampires, but this time she comes across the mysterious gunslinger Hannigan… who seems to be more foe than friend. There is an abundance of the dark humor and dry wit that Sabi became known for in her debut.

The introspection that comes with, “Vampire Wonderland,” is probably the story’s greatest strength, focusing more on the internal thoughts of Sabi than inundating readers with meaningless dialogue. It’s the preferable way to provide exposition for a world that readers have very little knowledge of, and makes all new information gleaned seem unforced. The dialogue that is within the story is refreshingly realistic (considering the apocalyptic/vampire setting). Sambrook and Jones have no qualms with making their characters curse, which feels like a more than appropriate reaction when murderous vampires are looking for their next meal.

A much-appreciated small Easter egg within, “Vampire Wonderland,” that I’m not even sure was intentionally included, was the reference to Duck Hunt. It seemed a fitting coda to the theme of older video games and, though, “Vampire Wonderland,” is not a story whose plot or aesthetics fit in the category, it was a nice nod that made the cover that much more relevant.

This gaggle of nimrods continues to be endlessly amusing to me as they carry on trying to attempt to right the enormous wrongs that they have inadvertently caused. The world is still ending, the demon deer has only gotten stronger, and the profits are still as dumb as ever. It’s the stupidity of these men that makes them so loveable because, while yes they are technically responsible for all of the chaos and destruction that has occurred, they really are doing their best to make things right.

Only, “Profits of Doom,” could have a character say, “We’re gonna be humped to death by a pair of feathery, mythical, monstrosities,” and have it seem wholly appropriate. Similarly, only this particular story could have a grizzled old man successfully outwit a pair of sphinxes by appealing to their, “cat side,” and using a pen light to distract them.

An amusing bit with a revolving door is a clear reflection of the overarching humor that Jones and Sambrook have done a stellar job at infusing within this series. “Profits of Doom,” has continued to be the brightest story within Papercuts and Inkstains, due large in part to the characters within it. As mentioned, it is the humor that has always been the story’s greatest strength and said levity predominantly comes from the ludicrous characters that drive the plot forward. The men react as I assume most would if placed in their situation, with a lot of cursing and a couple of unwanted bowel movements.

I’m not certain how many instalments are left, but the closing panel in this issue felt very much like the, “penultimate episode,” for the profits, with the big bad reemerging as our heroes(?) sh!t their robes.

Issue #5 was another solid instalment to the Papercuts and Inkstains series. There was a nice combination between unfamiliar stories/faces and beloved tales/characters that made for a fun read. Once again, despite the darker overtones, the unifying link within the series is humour. Though every setting and character differs, the comedy remains throughout.

Have you read Papercuts and Inkstains‘ latest issue yet? What did you make of it? Let us know in the comments section or send us a Tweet!