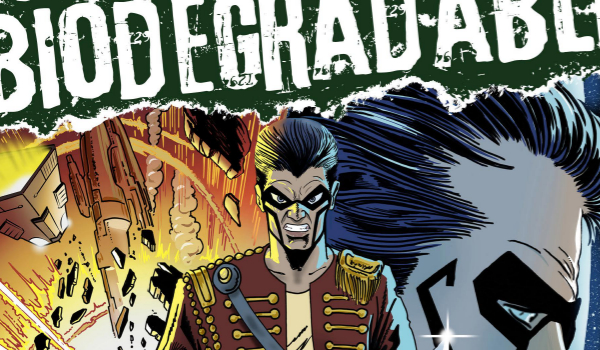 Why do people feel nostalgia?

It’s not a condition we forward-thinking folks at AP2HYC really suffer from. Sure, we like a few songs and literature from the past (it’s hard to fully enjoy something that hasn’t been written yet…for obvious reasons). But what self-respecting comic book fan wouldn’t, given the choice, pick tomorrow over yesterday – even if that tomorrow was a post-apocalyptic dystopia filled with robo-zombies?

True to form, 100% Biodegradable #12 is full of such futuristic dystopias (There are even some robo-zombies called “Deadbolts” in the latest instalment of “Death Duty”). The overall vibe of the publication, however, is that of a 2000AD annual circa 1982. Now, I’m incredibly old (pauses to adjust wrinkled plums under tartan blanket) and have Professor Farnsworth levels of abhorrence to the act of looking back (“Good news everyone, Lot’s wife just turned to a pillar of valuable sodium chloride”). So what’s in 100% Biodegradable for the person who, like me, read “Tharg’s Future Shocks” the first time round but doesn’t yet feel the need to bask in the warm glow of nostalgia?

Editor David Hailwood is the guiding hand behind the publication, with fingerprints on many of the strips. He is writer on the stories “Eat Me”, “Cackbeard”, “Operation Overkill” and “Bernie Quatro”, and, with John Freeman, co-scripts “Death Duty”. His aesthetic and narrative choices colour the entire issue. As a result, 100% Biodegradable reads like an impassioned breakup letter to the slick, franchise driven comics of the major American labels; one that reads, “I know you look shiny and buff; I know my British gnashers are brown and wonky and that I’ve got love handles – But that’s because I have a lot more fun than you”.

Take “Cackbeard The Pirate” for instance. The story is a shamelessly Carry On Columbus style riff on the oft-trodden trope of the space pirate. The British love of puns (the crew of the Jolly Todger faces off against Rastafarian poachers Rob Barley And The Whalers) and alliteration, “Now we be wedged in the backend of a bulbous behemoth”, are lent a gleeful immediacy by artist Dave Thomson‘s colourful artwork. It’s playful, perverse and great fun – A shared contract with the reader to go wherever whimsy and imagination leads, and to plunder whatever conventions are out there simply for the hell of it.

It’s no surprise, therefore, that pirates of one form or another appear in various strips. In “Moby Douche”, writer Jimmy Furlong and artist Andrew Hartmann‘s deliver a witty tale of celebrity chef-turned-buccaneer Ramsey Kinkaid – a blond but craggy bad boy, whose special gift lies in outsmarting his enemies, then serving them a la carte to his crew mates for supper.

“Red Rover” is another laser blast from the past. The eponymous hero is so grizzled that even his spacesuit has a hairy chest (I’m not kidding). Artists Santo and Charlie Hogg are clearly revelling in the opportunity to display their gift for wrinkles, eye-patches and stubbled chins. Writer Mark Bertolini nails the old-school tough guy dialogue too, describing Red Rover as “A man who literally knows where al the bodies are buried…because he buried them”. It’s a Philip K Dick style tale of outer space betrayal, paranoia and self-reliance and I can’t wait to find out what happen next (Oooh, please let it be revenge).

Imaginative as all the tales are, I did find myself wishing that the creativity would spill over a little more into the types of protagonists. Though the world building is exotic, there’s a social conservatism about the lead characters that reminds me a little of the all-white, all-male, all-macho astronauts in the 1950s sci-fi movie Forbidden Planet. Just my opinion, but a few more females, LGBTQs and persons of colour might make for a more relatable future. 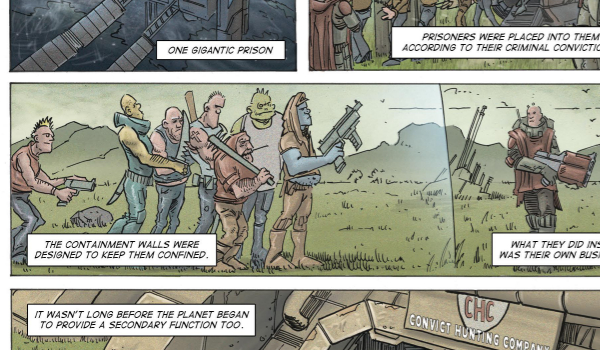 While the diversity of characters may leave a little to be desired, the diversity of artistic styles on display elsewhere is truly impressive. Ian Alexander‘s European bande designe style works perfectly on the short strip “Eat Me”. Denis Vermesse‘s manga infused pencils evoke a palpable sense of claustrophobia in “Operation Overkill”. Brett Burbridge‘s retro imagery on flagship strip “Death Duty” hits all the right notes (the secret lovechild of Krull and Battle Beyond The Stars?) Tony Suleri‘s bold charcoal work perfectly adumbrates the noirish world of robo-sleuth “Bernie Quatro”.

In short, all the artists in #12 put evocation of mood and drama before the drawing of pretty pictures.

And it is this, above all, that makes sense of my feeling of nostalgia, which in Homeric greek simply means “journey pain”. After years lost at sea, Odysseus is moved to tears by nostalgia, but not in the sentimentalised, kitsch way advertisers use to sell soft furnishings. What moves him is the knowledge that, although his own experience wasn’t heroic or glorious, he was part of something important.

100% Biodegradable makes me feel nostalgic because it is also part of something important. It is a punk rock act of resistance against the slick, over-budgeted but under-thought-about stories that abound in popular culture today.

The last story, “Area 101”, is a perfect demonstration. The earth has become a prison planet, divided according to the offence committed. But och, what’s this? Hoots mon, it’s a band o’ William Wallace quoting extreme patriots declaring “freedom” for Scotland. Dan Cornwell‘s artwork could be taken straight from the pages of 2000AD. Chris Redfern‘s story reads like a Pat Mills short. As with the story, the act of nostalgia for a past that never was (the real Wallace was a mercenary) is also a vision of a better future.

Punk rock acts of resistance don’t get old, even if we do. We need them more now than ever. 100% Biodegradable is here to remind us that the resistance will never surrender.

At least that’s our opinion. What’s yours? Readers of 100% Biodegradable, share your thoughts with us on our website or below.