Home » 6 of Watchmen’s Most Iconic Moments 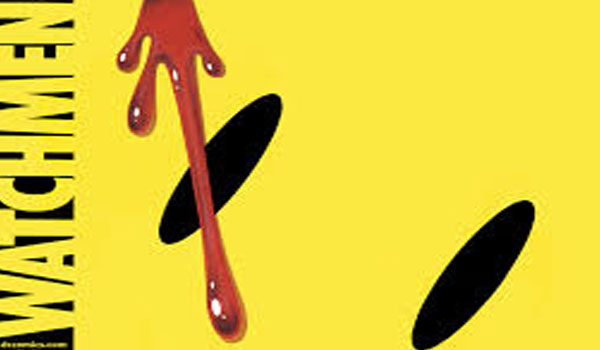 Since its publication in 1986, Watchmen by Alan Moore has by far become one of the most iconic graphic novels to date. It’s dark, gritty and the perfect definition of what a great graphic novel should be. In fact, this is arguably the greatest graphic novel to ever come into existence. With that being said, it’s difficult to pick just six of its most iconic moments. Granted, this list could easily be a top ten, fifteen, or twenty but at that point you might as well just make the entire graphic novel an iconic moment. Which, to a degree, it is.

So below are the six most iconic moments in an already iconic graphic novel series. 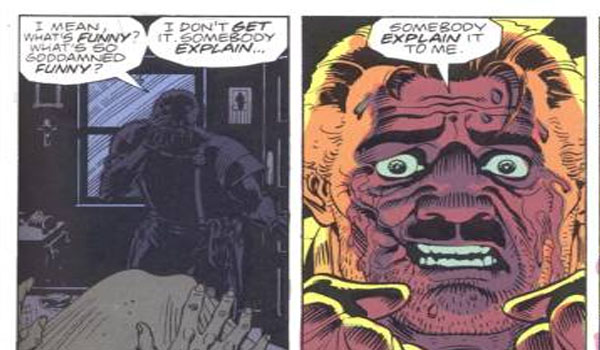 While this may be an unexpected addition to the list, it’s well deserved. One important aspect to Alan Moore’s writing is his strong sense of character development. The Comedian’s breakdown is one of the finer examples in Watchmen. Up until this moment in the story, there really is a question as to just how the audience is supposed to sympathize with a man like the Comedian. Every single one of the characters’ flashbacks of this man highlights the worst aspects of his being. He is a murderer, a womanizer, appears to be completely unsympathetic towards any cause, and is, quite frankly, a terrible person. Arguably, his depiction is so negative it’s to the point where there is a constant question as to why Rorschach is so determined to find his killer. Or rather, it feels as though his death is well deserved.

But then there is this beautiful moment between the Comedian and former villain Moloch. It is chilling to read how someone who appeared to be so evil is suddenly pouring his heart and soul out to a villain, of all people. His desperate need for forgiveness is so haunting both through the dialogue and artwork. You can feel not only how crucial this moment is for the Comedian but also how terrified Moloch is to experience this moment of vulnerability. 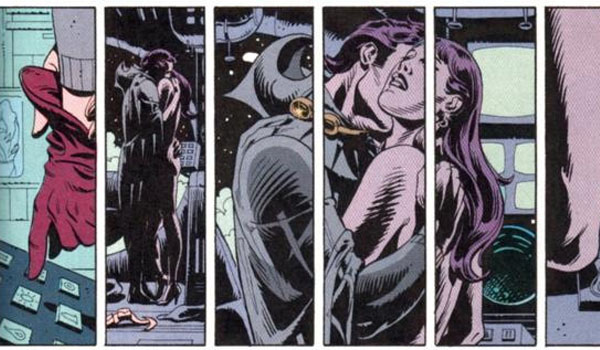 It’s one of the more lighthearted moments of Watchmen and yet it also highlights Alan Moore’s brilliance in character development as it examines a man who, quite simply, needs a sense of over-masculinity in order to overcome his impotency and insecurities. This scene is humorous in a dark, twisted sort of way as it examines why exactly some people in this universe decide to become vigilante’s by night and help fight crime. 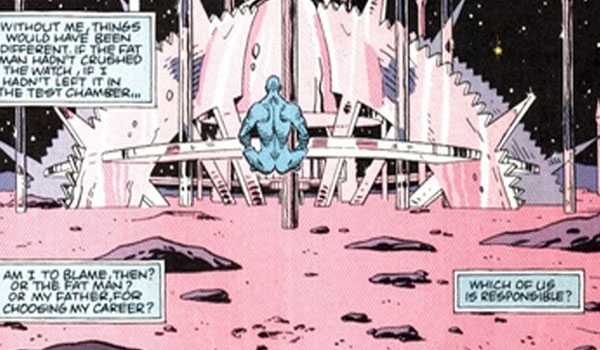 A lot happens during Doctor Manhattan’s sense of enlightenment. This entire chapter focuses on the existentialism and nihilistic themes explored throughout the graphic novel. In fact, this segment is so iconic it is now taught in high schools across the country. It’s the perfect demonstration of the idea of watchmaker, the fluid motion of time and space, the fact that time is nothing but a human construct. Doctor Manhattan’s journey is filled with so much meaning, it would take pages upon pages to describe how rich it is with meaning. 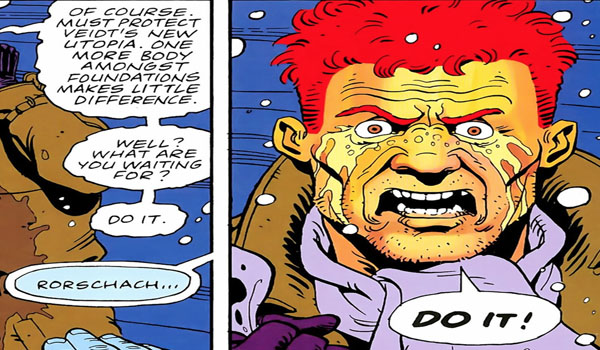 It’s a difficult task to grab an entire audience with a character like Rorschach. On the surface, he is antisocial, deranged, a sociopath. While it’s understandable, his take on the world is bleak to the point where the reader may find themselves spiraling into his thought process by the time they’ve finished reading the series. And yet, we root for him. We root for him because despite all his flaws, he wants justice. He wants to do what is right.

So when the moment comes where Rorschach refuses to step down and compromise in the face of evil, we can’t help but to root for him. And we know given Doctor Manhattan’s stance, things can only end one way. It’s a heartbreaking moment to see Rorschach pull off his mask and reveal Walter Kovacs and to know there is no happy ending in this scene. Despite  Rorschach’s efforts, at this point in time, it seems as though Ozymandias’ crimes will go unanswered for. And it’s quite the downer. 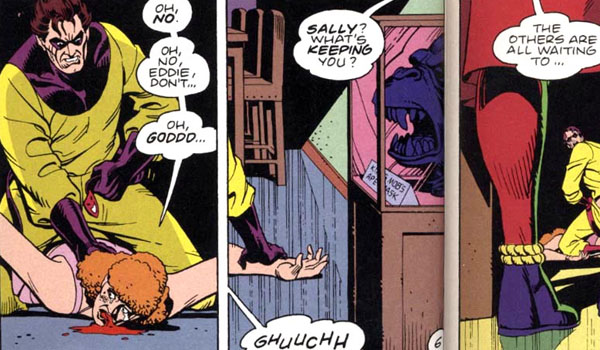 By far on the most grueling moments of Watchmen ironically happens towards the beginning of the narrative. This iconic scene where the Comedian sexually assaults Sally Jupiter is ruthless. It sets the tone of the narrative almost immediately by giving the readers a situation in which someone who is supposed to be a superhero is committing an unspeakable act. While it’s now much more common for superheroes to spiral into dark acts, Watchmen was really one of the first to give us something as gruesome as a sexual assault and to have it happen to another superhero is even more powerful.

It is not even the assault that makes this scene so dark and, arguably, terrifying. While Sally Jupiter is saved by Hooded Justice, she receives absolutely no sympathy from him. In fact, his line to her is “Get up…and for God’s sake cover yourself.” It’s a pretty brutal response given the circumstances and part of what makes this entire scene a perfect highlight of Watchmen‘s overall tone. 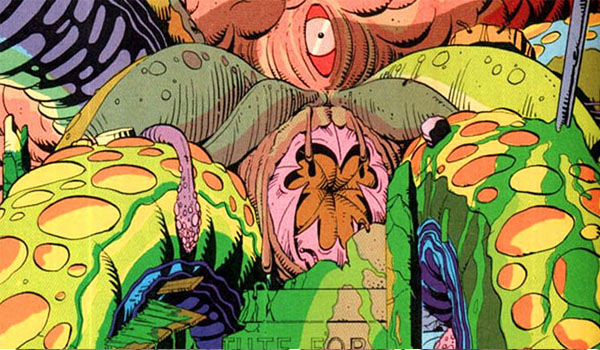 It’s not just the big, bad monster that single-handedly destroys half of Manhattan in one swoop. It’s the confrontation leading up to it as well.

The idea of the villain revealing his intent to his enemies may sound cliche. But in Watchmen, it completely works. It leads you down a path you think you know, one that gives you hope things may turn out all right in the end. But then there’s that single line that shatters the small hope you once had.

Really, the idea of the reader expecting a happy ending from Watchmen sounds silly. But the last moments of Watchmen when Ozymandias reveals his plans fools just about every reader simply because it is familiar. So when it is revealed that his plan has already been carried out, that Manhattan has been decimated, it’s a punch in the gut.


What do you think are some of Watchmen’s most iconic moments? Reply in the comments below or send us your thoughts on Twitter!