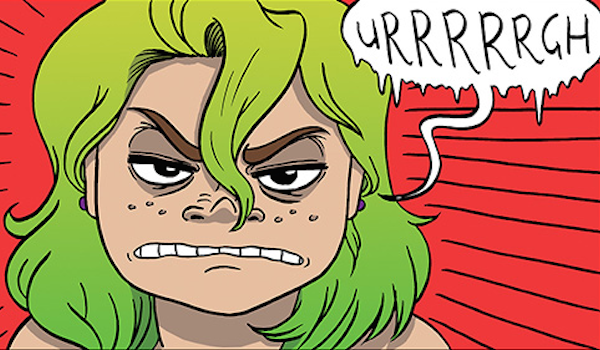 Rachael Smith, artist behind The Rabbit, Artificial Flowers, and the humour comics in the Doctor Who: Tenth Doctor comic series, is launching a Patreon campaign on July 1st to hopefully enable her to continue with her webcomic, Bess.

Bess is a story about feminism, ideals of beauty, and mythological Japanese monsters, and is set mainly in a supermarket in Hull. The story focuses on Lyndsey, a young woman who’s having a bit of a rough time of it lately. Her life is about to get turned upside-down pretty soon though…

In order to reach this monthly goal, Rachael will be offering three different monthly rewards:

1) For $3/per month: Patrons will get access to Rachael’s brand new, Patreon-exclusive diary comic which will update three times a week. Rachael will also post behind-the-scenes photos, brand new comic pages, and info about when she’s working on new projects. Patron’s will also get to see regular updates such as Ask Flimsy before anyone else does.

2) For $10 per month: Patrons will get everything in the $3 reward tier PLUS a brand new Rachael Smith-designed postcard ,with an original sketch and message on the back, sent to you in the mail every month.

3) For $50 per month: Patrons will get everything in the first two reward tiers PLUS an A3, original, signed comic page by Rachael Smith will be sent to you in the mail every month. These pages may be from a completed project, i.e. The Rabbit, Artificial Flowers, etc, or they could be from a project Rachael is currently working on, i.e. Doctor Who.

Rachael hasn’t worked on diary comics since her critically acclaimed One Good Thing project ended at the end of 2014, so she is excited to take on the challenge again for her Patrons!

Be sure to check out Rachael’s previous work and follow her on Social Media as well for the latest updates!