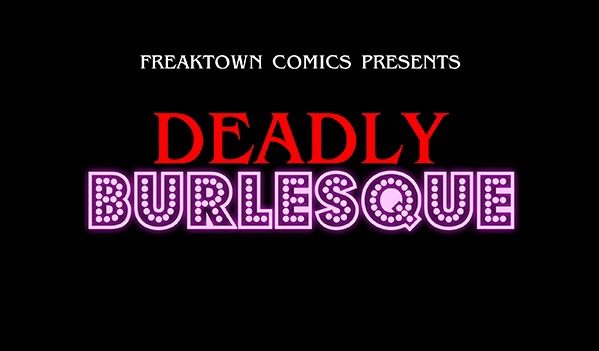 If you are a fan of 80s slasher films you will probably find a lot to like in Deadly Burlesque. Written by Russell Hillman and illustrated by Daniel Bell, Deadly Burlesque is a title from their Freaktown Comics collective. If you are not a fan of this genre then I would recommend that you get your horror fix somewhere else.

It is 1980 in Manhattan and at a burlesque show someone is killing the performers. Like any slashers film this is really an excuse to show people getting killed in extreme ways. The comic is short at only 24 pages and because of that we don’t really get to know the characters at all. There are mainly stereotypes or their one defining characteristic is a setup for the way they are going to be killed. There is no emotional attachment to anything that is going on and thus you do not care about anything that is going on. The best slasher and horror films get you to invest in characters and care about what happens to them. Even if it is to get you to hate someone so you get satisfaction out of seeing them killed. Without these relationships or character development it is just a series of bloody murders with no meaning.

There is also an inconsistency in a relationship between two of the main character in that the very first page makes it seem like they are just meeting for the first time or haven’t known each other very long but then by the end of the story they supposedly have a mentor relationship that has been going on for a while and one of them has learned everything they know about burlesque from the other. This makes no sense and seems like the writer simply forgot what the relationship was between the two main characters.

The artwork also leaves little to be desired. Some of the poses seem stiff and unnatural and left me wondering if someone would even make that kind of pose. There also are inconsistent in how characters are drawn and they can look different from panel to panel. Near the end a character also gets cut on the leg but we never see her with blood or any sign of a wound on her leg after that. It seems like an important detail that was either forgotten or overlooked for the final few pages of the book.

As you can probably tell I did not care for this book at all. I would recommend it to people I know who are fans of the slasher genre and like watching them for thrills or just for the murders. But if you are like me who want a little more character development in your horror stories I would recommend looking somewhere else to get your thrills and chills.