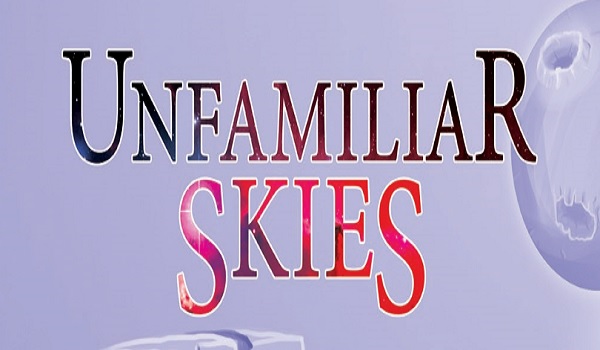 Greetings fellow space cadets and welcome to our review of the five page preview of Sam Webster‘s upcoming comic Unfamiliar Skies! Set to premiere at the Melksham Comic Con this August, Unfamiliar Skies is shaping up to be just what the space doctor (not an existing profession) ordered for fans of movies like Star Wars or comics like Saga. So then, let’s take a look at the five page preview shall we?

Meet Claris Muston, a 19 year old inhabitant of a space ship that was created for the purpose of finding new, inhabitable planets in the far reaches of space. Since humans have a relatively limited lifespan when compared to the vastness of the presumably unending Universe, the scientists who created this ship designed it to support generations of families for the long voyage.

Now, Claris isn’t too thrilled with the fact that her life has been somewhat “chosen” for what some may call a science experiment, so she takes it upon herself to leave the ship and brave the unknown Universe all on her own. Shortly thereafter she encounters just one of the many dangers that lurk in the dark void of space; an appropriately named “void wyrm.” Check it out! 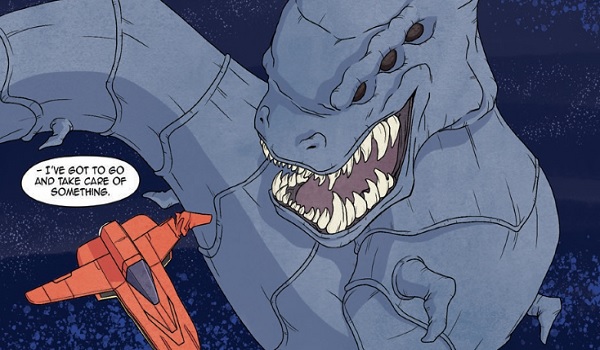 The encounter causes Claris’ ship to crash land on a planet. Crawling from the wreckage, she is greeted by a mysterious inhabitant of the planet who speaks an alien language; and thus, her journey begins.

The five page preview of Unfamiliar Skies gives just enough of a taste of what’s to come to get the speculation rolling. What strange and interesting characters will Claris meet during the course of the story? What manner of dangerous villain will she face, and what kinds of obstacles will stand in her way? Sam Webster explains that Claris is one of the more complex characters he has written, and that he aims to confront some of the deeper questions relating to the existence of humankind; is our insignificance in the Universe significant? How do we fit into the grand scheme of all things? If you’re a deep thinker, then Unfamiliar Skies is going to be a book you’ll want to pick up.

Webster also provides the artwork for Unfamiliar Skies, and if the preview issue is any indication, we’ll be getting tons of imaginative creatures and characters going forward. Everything is well drawn, brightly colored, and is overall pleasing to look at. It’s interesting to see different artists’ interpretations of space and their ideas of how things might look out there beyond the beyond, so that’s another thing to keep in mind if you’re a fan of science fiction…type…stuff…ehem. Look at some more artwork! 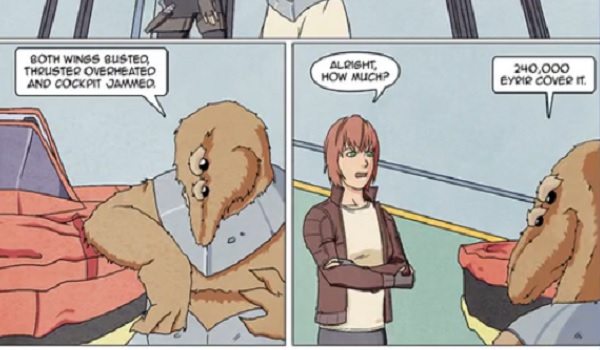 You drive a hard bargain, sir. I’ll pay it.

That weird Fox McCloud (Star Fox) looking guy is named Kaupmadr, and at this point we can only surmise that he is indeed the mysterious alien who greets Claris after her crash landing. Kaupmadr seems to be a bit of a gear-head, and may just be a valuable asset to Claris on her travels. That’s one of the things I’m personally hoping for in Unfamiliar Skies; a “rag-tag” group of space travelers trying to find their way towards a common goal. Call it cliche if you will, but I never tire of it and gazillions of Star Wars fans across the known Universe wouldn’t argue either.

Unfamiliar Skies looks to be one of those stories that can open up in big ways; with the proper support, of course. Visit Webster’s official Kickstarter to check out some of the rewards he is offering, while also getting a fair bit more information about the book. Of course if you’re impatient like me, you can simply download the five page preview for free (yes, free!) and join in the speculation!

For even more information about Unfamiliar Skies and Webster’s other comics, visit his official website and follow him on Facebook and Twitter! If you’re local, stop by the Melksham Comic Con on August 27 and 28 (or both) and pick up your copy of Unfamiliar Skies!

Are you getting psyched up for some space opera action in Unfamiliar Skies? Let us know in the comments section and on our Twitter page!