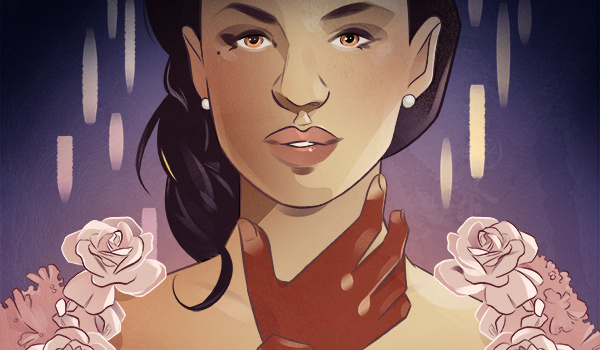 Ahoy there fans of drama and intrigue! We recently had the chance to chat with Robin Hoelzemann, creator of the ongoing webcomic Curia Regis! This series begs the question: “What would you do if you had three months to live? Give up…or steal a country?” Personally I’d go with stealing a country since I’ve basically been trying to do that for a while anyway,…but, uh…don’t tell anyone that, okay?

For more information on Curia Regis and Hoelzemann’s Kickstarter campaign, visit her website and then take a gander at our recent Press Release. So, what are we waiting for? Let’s see what Robin has to say about Curia Regis!

AP2HYC: Give us a little background on the inspiration for Curia Regis.

Hoelzemann: Curia Regis fits nicely into the “fantasy of manners” genre, albeit without the fantasy angle.. I grew up in love with books from Sherwood Smith and Tamora Pierce, and at some point discovered Rainbow Rowell, Melanie Rawn and Maggie Stiefvater. I wanted to see if I could do what they were doing with their character-driven novels in comic form. Add a splash of adoration for The Scarlett Pimpernel and absolutely anything with spies and you’ve got the beginnings of Curia Regis.

AP2HYC: How has your creative approach changed since you first started the series?

Hoelzemann: Does it sound bad if I say I feel like I’m starting to know what I’m doing? I’ve been at this for over five years, and Curia Regis was my first serious comic. A lot of the early chapters involve serious trial and error and if I went back now, I’d do a lot of things differently. So differently, in fact, that Chapter 1 is getting a full redraw and rescript for the print edition of the comic.

AP2HYC: Curia Regis is in many ways a period piece. How much of it is grounded in actual history?

Hoelzemann: These days, not so much. When I first started the series, I was absolutely fixated on keeping the set pieces grounded in the 1740s. There’s a panel early on in the prologue where I started out by drawing a matchbook. It didn’t occur to me until I was almost finished that matchbooks weren’t a common item until the 1890s. What a nightmare! I redrew that panel.

As the series progressed, however, I realized that I wasn’t doing myself any favours. The comic isn’t set in the real world, and actual history wasn’t helping me develop the characters, so I drifted away from it. I think creators need to give themselves the freedom to make those kind of decisions. You can pinpoint almost exactly where I went off the rails by what Lina and Maren are wearing.

AP2HYC: Curia Regis is perfect for the comic book medium. What steps do you take to ensure that it is visually authentic to its time?

Hoelzemann: Given that the comic is now more “18th century-ish,” I get a lot of enjoyment out of tweaking modern things into 18th century styles. I’ve got a huge bank of research on the era, and I borrow and change until I get a mix that looks how I want it to.

In all honesty, I spend more time making sure the characters are visually authentic to themselves. King Regent Alaric wears a lot of dark and heavy fabrics with tight cuts to express control, while Jacques looks like he just salvaged yesterday’s clothes from the floordrobe. I’m focusing a lot on clothes here, but it’s in mannerisms as well. Maren has her hands clasped tightly together in a lot of panels, while Lina is everywhere at once.

AP2HYC: Which artists or works have had the biggest influence on you as an artist?

Hoelzemann: Before I finally got into the groove with Curia Regis, the prologue went through six renditions. 17-year old Robin was very into Sailor Moon and my talent was…shall we say latent? From there, I think it’s safe to say that Mark Buckingham‘s work on Fables and Terry Moore‘s Strangers in Paradise had a controlling interest in my development for a while. Incidentally, Strangers in Paradise was also the first comic I saw that wasn’t focused on plot so much, but rather on the characters. And I loved it.

My own style is much more of an amalgamation now. When I see elements of something I really like, I play around with them a little bit and see how it fits. Sometimes it does, sometimes it doesn’t. That’s part of how artists learn and evolve.

AP2HYC: Describe the process of updating some of the artwork for the collected edition.

Hoelzemann: This is an absolutely monstrous task. Five years of art development means that there’s a lot of lacking in the early chapters. Strangely, I’m still happy with the prologue, so those pages will mostly stand, but some of the characters in the early chapters are just about unrecognisable from their later incarnations. It’s about finding a middle ground between fixing every single panel, and creating a certain level of consistency across the book.

AP2HYC: On your website you talk about live streaming as you work. Elaborate a little bit on that.

Hoelzemann: I have to say, I don’t live stream all that often. But I love interacting with readers and answering questions on the process or comic. More regular live streaming is actually one of the goals on my Patreon.

AP2HYC: Curia Regis updates twice a week. How do you keep up with that schedule?

I think half of keeping up is just dropping your arse in the chair and getting the work done, but the other half is working out what process works best for you. For me, that means working in batches of about six pages. Six pages of pencils, then circling around to inks, then flats, then shades. For me, it’s more efficient and therefore faster. It also means that I generally have a buffer, which is great for making sure that self-care is an element of my day. Going for walks and eating properly need to fit in there somehow.

AP2HYC: Where do you see the story going in the future? Do you have an ending planned?

Hoelzemann: Of course! Diving into a long form comic without an ending in mind just sounds painful. That way madness lies. Curia Regis is almost exactly half way, and there’s some pretty big questions still to be answered. Volume 1 was about setup; Volume 2 is about fall out.

AP2HYC: If the Kickstarter is a success, what’s next for Curia Regis?

Hoelzemann: Well, as a start I’ll actually have some books to take to my conventions in the Autumn! I’m scheduled to be at MCM October in London, and Thought Bubble in November, both of which are fantastic conventions. After that, I’ve got an entire Volume 2 to take care of! And of course there are already other stories milling around in my brain.

AP2HYC: What are some of your favorite comics?

Hoelzemann: Ach, there are so many! I love seeing how the industry has evolved over the past decade. There’s so many of us doing things that are a little different. I will jump through any hoop to get hold of Tony Cliff‘s Delilah Dirk books, and everyone should find a copy of Castle Waiting. There’s a huge treasure trove of comics that are primarily online though, and I can’t recommend Kate Ashwin‘s Widdershins, Pascalle Lepas‘ Wilde Life, and Petra Nordlund‘s Prague Race enough.

I’m also part of a collective of artists called Countershot, and we’re tackling a huge range of character driven comics.