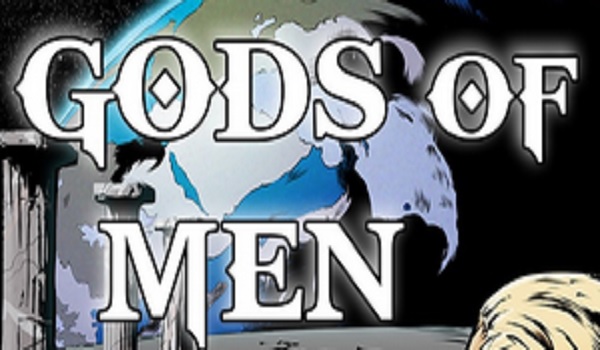 Writer Michael Phoenix and his print line Mythic Press is excited to announce the launch of its Kickstarter for new comic publication Gods of Men, starting on 1/08/2016!

In the year 2045 the Earth and its destiny no longer belongs to its inhabitants nor its leaders. The once great superhero “The Sentinal” has ruled the Earth for over a decade and alters the course of fate for nations and governments as and when he chooses.

After a return to the joy of comic reading, creative writer Micheal Phoenix launches his Kickstarter this coming August for his first comic publication Gods of Men. He describes it as an innovative comic narrative of the use of power and morality.

“When thinking of a subject I wanted to write about I looked to inspiration from the stories that have excited me the most. Watchmen, the seminal work of comic legend Alan Moore, was probably the biggest influence; I wondered, ‘what was beyond Watchmen?’ as in what if a superhero had continued to rule the fates of humanity as part of a greater plan would he be seen as a saviour or demon?

“I’m also very interested in grittier, more realistic and sometimes darker depictions of ‘heroes’ of any kind and whilst it’s sometimes criticised for having been en vogue for many years I still think there are unique stories in that style that are still to be told.”

As part of preparation for the launch, a teaser has been produced that is completely free to download from Michael’s site via the link below. Mostly in black and white but with some examples of the intended coloured end product, it introduces the world and central character “The Sentinal” in all his terrible glory.

The Kickstarter begins 1st August 2016 an runs for the standard 30 days with a target of £2000, typical of a first issue outing on the platform, and offers a variety of pledge levels for the interested backer. Rewards start with a PDF copy of the first issue and progress upwards to include extras such as A4 prints of character concepts and finished pages as well as custom written stories and artwork from Michael and the issue artist, Christian Paris.

Writer Michael Phoenix is a digital marketer by trade but writes short stories and more in personal time as well as the upcoming novella Infinity Chronicles. After a 3 year journey back into the world of sequential storytelling, first visited in his youth as an avid reader of 2000AD, this is to be Michael’s first comic release with him currently developing themes for another series to work on in tandem.

Artist Christian Paris is a graduate of the Academy of Fine Arts (degree in comics and illustration) in Italy where he studied for many years with teachers such as David Messina who recently provided art for the revival of the iconic Rom Space Knight comic for Free Comic Book Day. Christian’s art is dense and detailed and coupled with an excellent ability to realise script direction into thrilling black and white panels with innovative form and dynamic storytelling.

Professional colourist since 2011, Stefano studied at the Academy of Fine Arts (degree in comics and illustration) in Novara, Italy. At first Stefano worked with local comic book artists then he helped international colourists, especially for the Zenescope series of comics. His most notable collaboration is with LRNZ and his comic Golem, published by Magnetic Press in America.

Mythic Press is the publishing line of Michael Phoenix, creator writer and avid comics fan. The print line is characterised by darker pulp tales with a philosophical theme that are aimed at the more adult and questioning reader.