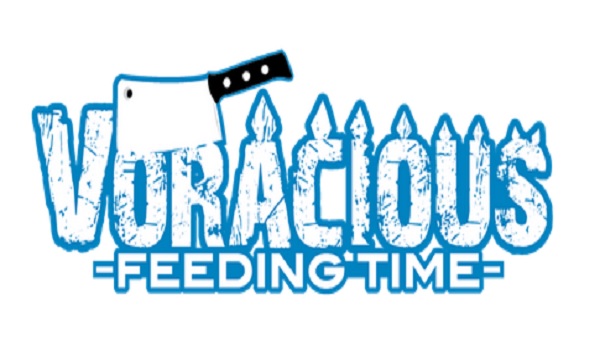 Voracious: Feeding Time is written by Markisan Naso with art by Jason Muhr. It continues the story of the chef Nate Willner who unexpectedly rekindles his desire to cook after he inherits a time travel suit that takes him to the age of the dinosaurs. There, Nate end up eating a Quetzalcoatlus and gets the idea to open a restaurant in the present that serves ancient meat from the past.

The first four-issue series, Voracious, was met with widespread critical and fan acclaim for its quirky take on time travel, engaging characters, humor, sci-fi action and heart. A trade paperback collection of those issues, Voracious Vol. 1: Diners, Dinosaurs & Dives, was released in August.

Voracious: Feeding Time, the new 5 issue sequel is set to debut in December from Action Lab. It will pick up right after the big twist ending in Voracious #4 that TheBrokenInfinite.com called “one of the most ingenious swerves that I have seen in a comic in a long time.” The series takes the story in a bold, new direction as Nate and his friend, Captain Jim, discover that time traveling and making dinosaur sandwiches have consequences they never could have imagined.

By contributing to the Voracious: Feeding Time Kickstarter, fans can help the creators continue their unique series. “Producing a comic is crazy fun, but we do have front-end expenses for creating Voracious,” says series co-creator and writer Markisan Naso. “We aren’t looking to pay ourselves. But we are hoping to get a little help with covering the costs for coloring and production.” 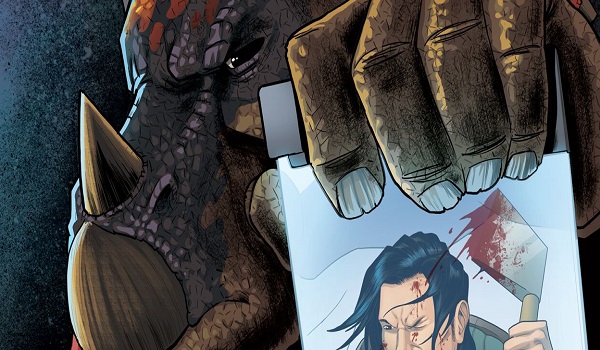 The Voracious: Feeding Time campaign started on August 30, 2016 and will end on October 4, 2016. The team is asking for $5,000. Rewards include physical and digital copies of a Limited Edition Voracious: Feeding Time #1, an exclusive print, a Vocarious T-shirt, an apron based on Nate’s own from the series, fan cameos in the book, sketches, a cover commission for a backer’s own comic, and even a half day in Chicago with Markisan and Jason. “You get all the rewards and then we will take you to our favorite comic shop and a great restaurant for lunch. I’m even throwing in a kick-ass guide to Chicago that I created. It includes all the best places to visit. One of them may or may not have dinosaur meat…”

For more about Voracious: Feeding Time, including preview pages from issue #1 and a video about the series, check out the Kickstarter campaign.

We are humbled by all the amazing reviews and kind words we received for our first series. Here are a few:

“I highly, highly recommend this comic” – Mark Waid (All New, All Different Avengers and Black Widow)

9.5/10 “You know, you should never judge a book by its cover. I’m glad I didn’t because I was in for a surprise.” – www.outrightgeekery.com

9.25/10 “Markisan Naso and Jason Muhr have created a story that after four issues has reminded me of why I love comics…A series that you absolutely need to read.” – graphicpolicy.com

9/10 “This is a gem of a book – a unique premise with amazing execution of the concept.” – www.tmstash.com

Markisan Naso is the writer of the critically-acclaimed comic book series Voracious, published by Action Lab Entertainment. He is also an editor and publishing expert who has managed and revitalized national publications such as Knowledge Quest and School Library Research for the American Library Association. An accomplished journalist, Markisan has authored more than 150 features in print and on the web, covering subjects as diverse as EF5 tornadoes, death metal and Superman. Most recently he wrote a tribute to the late Darwyn Cooke for The Comics Journal.

Markisan has also edited over a dozen books, including The Anatomy of Zur-en-Arrh: Understanding Grant Morrison’s Batman and Voyage in Noise: Warren Ellis and the Demise of Western Civilization for the Sequart Organization. In his spare time he interviews comic book creators for his podcast, Colloquium. He loves kitties and metal. To find out more about Markisan visit his website, markisan.com.

Jason Muhr is the artist, designer and letterer for the critically-acclaimed comic book series Voracious, published by Action Lab Entertainment. He has also worked with Valiant Entertainment and co-created the short story “Like Giants” with Mark Waid for Thrillbent. Jason has a decade of experience as a professional illustrator an graphic designer, providing companies with logo and concept designs, and art for products such as plush toys, remote-control robots, interactive games, garden accessories, pottery and candy. Prior to entering the art and design world, Jason spent six years on the retail side of the comic book market as an assistant manager at Graham Crackers Comics chain of Chicagoland comic shops. To find out more about Jason visit his website jasonmuhr.com

Kickstarter helps artists, musicians, filmmakers, designers, and other creators find the resources and support they need to make their ideas a reality. To date, tens of thousands of creative projects – big and small – have come to life with the support of the Kickstarter community.