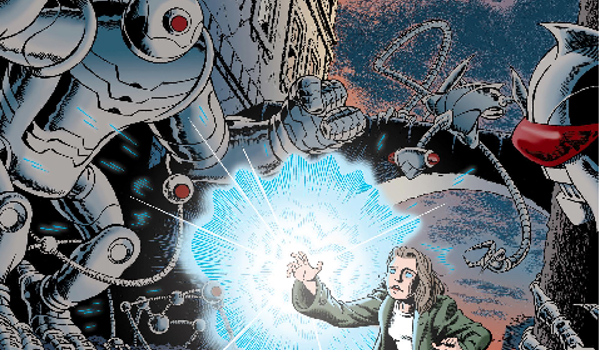 It’s the 13th issue of David Halewood‘s sci-fi and fantasy anthology 100% Biodegradable and, as one would hope, extreme misfortune awaits the heroes of both the serial and one-off strips. What other publication could offer the eager reader bubonic plague, cannibalism, robot uprisings and no less than five, that’s right FIVE, apocalypses (never thought I’d get to pluralise “apocalypse”) in a single issue?

In short, more bad mojo mayhem than you could generate with a hand grenade and a mirror factory.

We warm up with Halewood and artist Ian Alexander‘s beautifully executed short form strip “Eat Me”, where the ever-quixotic cannibal boy expresses his hopes for world peace, only to end up back in the pot again. And that’s just the amuse bouche for the banquet of horrors that awaits.

In “Atomic Control” we get our first apocalypse and a tale of man-versus-machine in old London town. Chris Redfern‘s narrative dovetails perfectly with Edward Whatley‘s art in what can best be described as an old-school meets new-school mash up. The tone is that of a Boy’s Own adventure story, but one that quickly collides with modern concerns like technological singularities and quantum instability. “The controlling of atoms is a delicate thing”, explains the heroine and this delicate alchemy is what gives the tale energy. Whatley’s traditional drawing technique is supercharged by modern methods of digital colouring and image manipulation, culminating in a splash panel of a fusion bomb detonating over the cosily familiarity of the London skyline to dramatic effect.

“The Black Death” takes an entirely different approach with equal success. Hailwood’s comic tale of bubonic plague and chivalric violence is brought to gruesome life in artist Danos Philopoulos‘ expressive, “my Windsor and Newton ink blotter’s fallen down the back of the sofa”, black and white panels.  Both the visual style and storytelling is reminiscent of 80s budget sword and sorcery movies, with the horrific elements of The Beastmaster or Deathstalker blended with the whimsy of Hawk The Slayer to fantastic effect. If, like me, you’re a fan of the genre, then this strip offers a real and rare treat.

Centrepiece serial “Death Duty” continues to steer a course for adventure. Less self-conscious than some of the other strips, “Death Duty” relies on writer John Freeman‘s careful world building and the pure craft of storytelling to work – and work it does. This issue’s somewhat longer narrative arc allows for a highly enjoyable build and payoff, both for the story and characters. Artist Brett Burbridge‘s gleeful art has never been better than in the confrontation between warrior sex-kitten Rourke and the lazy middle-management drones of Ground Control. A ripping yarn that’s hitting all the right beats.

In an issue filled with successes, my personal favourite is “Tiny Skull Attack” by writer Kek-W and artist Lukas Kowalczuk. A short-form, standalone story, it nonetheless punches well above its weight in terms of wit and well crafted storytelling. While it would be a shame to ruin the thrill of the story, the basic premise is that Pluto, disgruntled at its demotion to dwarf-planet status, sends a “War Skull” to attack the scientists responsible; scientists who in turn are the stuff of conspiracy theorist nightmares. The short, sharp satirical shock of Kek-W’s script is brought vividly to life by Kowalczuk, whose art is as schematic as as a prison tattoo, with the primal energy of the sort of caffeine-laced soft drink sold at raves. I’ve admired his standalone artwork in other publications, but never coupled with such a strong narrative. It’s a team-up that really works.

Emmet O’ Cuana and Dave Dye‘s “The Hurly-burly’s Done” is the perfect counterpoint the exuberance of “Skull Attack”, starting as it does with an intimate portrait of an old man grieving for his dying wife. Through a series of impressive visual reveals by artist Dye, we start to glimpse that the ancient lovers are, in fact, lifelong Satanists facing the end of days. I’m not sure if writer O’ Cuana has ever studied improv, but the technique of staged narrative building from the particular to the general is a classic technique, used here to great dramatic effect.

Hailwood continues to delight, adding humorous strips “Cackbeard The Pirate” and “Everlasting Peace” to the melange, with collaborators David Thomson and Tony Suleri continuing to kick ass and take names in the Future Shock style strips. A note of praise also to assistant editor/letterer Ken Reynolds and graphic designer John Kirkham, whose tireless efforts make a selection of disparate tales really feel like a unified whole.

With every issue of 100% Biodegradable, Hailwood’s editorial tastes and punk-rock irreverence shine more brightly. Far from diminishing, his creativity actually seems to increase with every issue. It’s as if the act writing clears the cosmic nano-tubes of his creativity. The act of collaboration allows him to draw inspiration from other artists and writers, ultimately making the comic bolder, more direct and a “must-read” for all lovers of the sci-fi and fantasy comics.

Have you read the latest issue of 100% Biodegradable? What did you make of it? Let us know in the comments section or send us a Tweet! You can find out more about the comic by following them on Facebook!