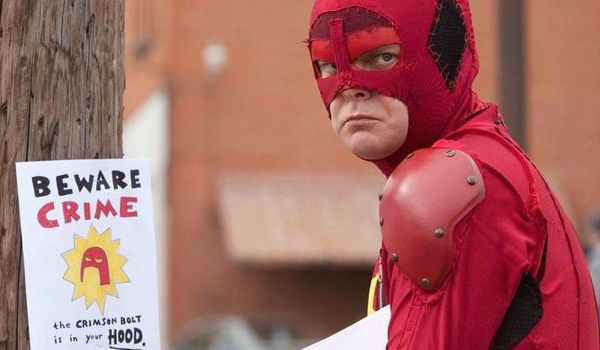 “All it takes to be a superhero is the choice to fight evil,” though a short fuse, a lot of down-time and hallucinations really expedite the process. In 2010, before Guardians of the Galaxy danced its way into our hearts, director/screenwriter James Gunn dipped his toes in the superhero surge with Super, a film drenched in bloodshed and at least four different film genres. Super sports a strong premise and innovative lead character, but Gunn fails to make the best vigilante movie of 2010.

The film opens on milk-toast fry cook Frank Darbo (Rainn Wilson) recalling the two highlights of his life: marrying recovering addict Sarah (Liv Tyler), and once, with minimum effort, helping the police catch a purse snatcher. But his loser life spirals into chaos when Sarah gets hooked on drugs and leaves Frank for slick drug-dealer Jacques (Kevin Bacon). Frank falls apart until he has vision of local public access fictional hero the Holy Avenger (Nathan Fillion). The Holy Avenger convinces Frank he has been touched by God and has a higher purpose in life. Frank reinvents himself as a superhero to fight every injustice in his neighborhood. He dons the identity the Crimson Bolt, and arms himself with a pipe wrench and an enthusiastic sidekick (Ellen Page) to save Sarah from the clutches of evil.

The frustrating thing about Super is the first half of the film has such great potential. It’s refreshingly not based on an existing property, just on the idea of what would happen if a seemingly normal person decided to become a superhero. It feels realistic too, or at least more possible than Kick-Ass. For example, everyone knows Frank is the Crimson Bolt. He’s completely clueless on how to be a superhero or even how to hide his identity. In one scene, while waiting in line for the movies, he witnesses a man and woman butt in line. When they refuse to move, Frank leaves, comes back minutes later, and smacks them both with his pipe wrench. In broad daylight. It’s a violent reaction, sure. But they shouldn’t have butt in line.

The film’s greatest weapon at its disposal is the man playing the man behind the mask. Wilson brings the utmost seriousness to Frank, which churns out most of the film’s hilarity. He doesn’t play Frank as crazy; more like progressively unhinged. He perfectly captures Frank’s black-and-white view of the world and his emotional complexity. The laughs he and Gunn dole out aren’t meant to make fun of Frank himself, but rather his ineptitude at being a hero. If Super proves anything, it’s Wilson’s prowess to carry an entire film on his shoulders.

Unfortunately, that great potential chugging through the first half of Super implodes once Boltie leaps onto the scene. Boltie, the Crimson Bolt’s self-appointed sidekick, is like a giant stop sign in the middle of the plot. Literally, for over twenty minutes, the audience endures Boltie-Crimson Bolt misadventures that add nothing to the story. Perhaps if Boltie was introduced earlier and not just her actual identity of Libby, a girl from the comic book store, the pacing of the film wouldn’t have been off. Although, where in the film she debuts isn’t the only problem. It’s nice to see Page in a role where’s she not pregnant or joining a roller derby league, but there’s a special place in hell for the skull-piercing shriek she’d like the audience to believe is a maniacal laugh. Her overacting is distracting, especially considering Libby/Boltie receives so little character development.

In fact, the entire supporting cast of Super has little to work with. For a character who’s supposed to be the hero’s quest, Tyler’s Sarah is barely in the movie. Her sad eyes are her predominant trait, which is especially concerning because of the film’s ending. As it turns out, Frank realizes he’s not God’s chosen one, the one with the higher calling – it’s Sarah. What, exactly, is so special about Sarah remains a mystery. Maybe the answer is in the unseen scenes between her and Jacques. When he is on screen, Jacques is a delight. Bacon clearly has fun with this smarmy villain and has excellent comedic timing, but again, his character is thinly written and has a very limited screen-time.

The other huge issue with Super is Gunn’s inability to fully commit to one tone. For some perspective, this is the title sequence of the film:

It’s far more interesting than a Marvel Studios’ opening. Moreover, the title sequence, in theory, should reflect the tone of the movie. Dark, but funny; simple, but fun. And for the first half of the film, it does. Even the violence is underscored with animation and winks to the 1960’s Batman series. But this is B.B: before Boltie. Fucking Boltie steals the fun. First by existing, then by raping Frank. Who even knows why she did it; Page nor Gunn have any idea what exactly goes on in this character’s mind. By the final thirty minutes, the laughs have died. The third act is an entirely different movie. It amps up the violence and throws a pipe bomb at the comedy.

Overall, Super is more okay than actually super. Wilson works wonderfully with the material, but the rest of the cast is not given a similar opportunity to shine. Gunn’s script starts off strong, but, much like Sarah, falls of the wagon one too many times. Super has too many identities, and it ultimately fails at the experimental superhero film it tries to be.

Have you seen Super? Is it recommended for you on your Netflix account? Sound off in the comments below, or send your thoughts on Twitter!